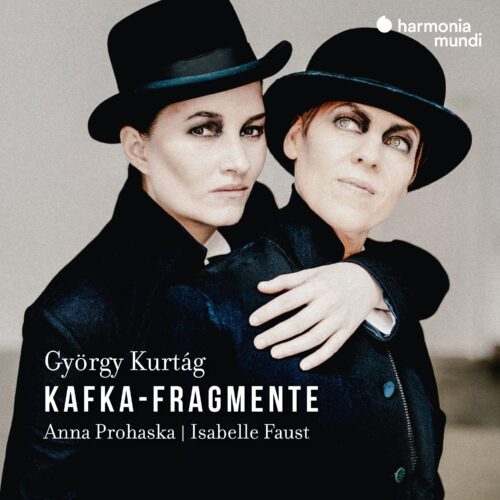 It is a singular experience to plunge into the musical universe of György Kurtág, the Hungarian composer who celebrated his 96th birthday last February. One finds oneself absorbed in a Dadaist maelstrom of sounds, textures, and kaleidoscopic emotions of profound originality. At once hyper avant-garde but not cerebral, Kurtág has made his music a Big Bang parallel to that of the Second Viennese School (Schoenberg-Webern, and those who followed including Pierre Boulez). A Singularity in orbit around, or rather with, the equally unique astral entity that was Ligeti (another György)!

Kafka-Fragmente was begun in 1985 when Kurtág was fascinated by short sentences and fragments from Franz Kafka’s texts intended only for private use (diaries, letters to friends, etc.). The composer detected a central theme, a vital leitmotif: that of wandering. Thus Kurtág put down on paper, almost without thinking too much about it, idealistic, motivic, and melodic spurts that ended up being grouped together in a cycle of lieder of 40 pieces, on average very short (between 20 seconds and one or two minutes), but some of which go on to four, and even seven minutes. These constitute what is called ‘the path’, both in the literal sense of a path physically traversed in a labyrinth and in the figurative sense that the walker is in fact someone who is searching or questioning him or herself. You will have quickly understood that this staging conjures up a whole host of images of detours, sudden stops, uncertainty, accelerated straight-line flight and sharp turns. The imaginary walker is assailed by excitement, hope, perplexity, doubt, and discouragement.

Kurtág’s genius is to have reduced the musical material to a kind of ultra-concentration, like a writer of haikus that are particularly precise in their economy and immense in their depth. First of all, through the instrumentation: a voice (Anna Prohaska, sublime and in perfect control of the astronomical difficulty of the score) and a violin (Isabelle Faust, an indispensable travelling companion, transcendent and exercising a blinding technical clarity). Then, above all, in the use of motifs and sound fragments of great economy which interweave, juxtapose, link and respond to each other in every way imaginable in terms of contemporary musical techniques, but always with extreme delicacy. Spun sounds, snarled musical lines, discordant noises, anxious canons, and even some references to Eastern European folk music are conveyed.

The result is an emulsion of ideas that the two performers have to exchange with diabolical skill through nanometrically narrow interstitial spaces. But it is here, in this quantum mechanics of music of the infinitely small, that Kurtág achieves the total reversal of the creative explosion: a complete and infinite universe of meaning and significance is thus created, starting from almost nothing.

Oh, don’t be fooled: Kafka-Fragmente op. 24 is not an easy listen. And the veil of understanding may not be lifted with just one first listen. But as with Alice’s hole, if your search leads to discovery, the world thus revealed will be overwhelming, for better or for worse.

For music lovers who want to compare, a 2006 version with Juliane Banse (a soprano more scintillating than Prohaska’s fleshy tone) and Andras Keller on the ECM label is a must.