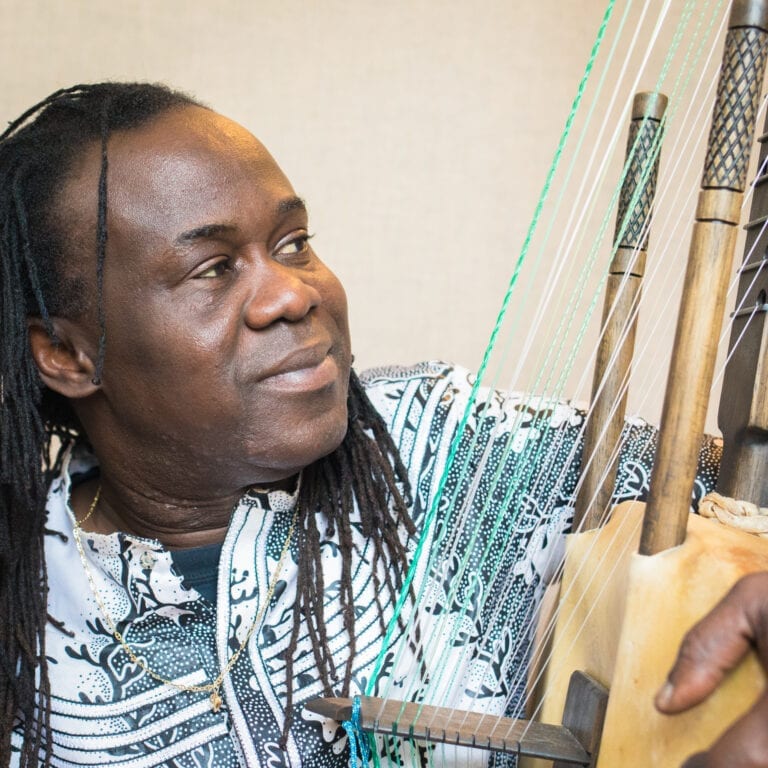 Montreal’s musical ecosystem is home to an authentic Senegalese griot, a kora virtuoso from a long Mandinka lineage. Established in Quebec for more than 20 years, Zal Sissokho has been experimenting with hybridization while continuing the transmission of his age-old culture. Launched on Analekta last February, his album Kora Flamenca is a stylistic fusion with guitarist Caroline Planté, double bassist Jean-Félix Mailloux, percussionist Miguel Medina, oud player Mohamed Masmoudi, and singer Marcos Martin.

Celebrated on Wednesday, October 28, during ADISQ’s 2020 gala series, where Sissokho took home the award for Album of the Year – World Music, the material of this opus is once again highlighted in the context of a concert recorded and webcast at the Nuits d’Afrique.

PAN M 360 contacted the lucky winner for a conversation.

PAN M 360: You are a kora virtuoso, singer, and songwriter, you left Senegal and settled in Montreal in 1999 – how has this relocation changed your music?

Zal Sissokho: Yes, I am a kora virtuoso, singer, and songwriter. About a third of kora players also sing, that’s my case. I was first trained by my late father, Diéourou Sissokho, and I continued learning with other players. For me, living in Montreal allowed me to continue what I had started in Senegal.

PAN M 360: Sissokho is a griot’s name. What was your role in Senegal, and how do you see this role since you have been living in Canada?

ZS: The role of griot is still within me. A griot is a storyteller, a family mediator, and a musician. Through his words and music, he helps people become aware of different issues. I continue to assume this role here in Quebec.

PAN M 360: Will your children follow in your footsteps?

ZS: My daughters are very interested. Traditionally, griot girls sang and did not play instruments, which was the way it was done in the Mandingo Empire. Today, however, it’s more open and girls can learn to play the kora. My oldest should start next year because the size of the instrument requires you to be 12 or 13 years old to learn it. My task is to pass on my traditional knowledge to my daughters, after which they will decide if they want to continue.

PAN M 360: In Quebec, you worked with the Diouf brothers, with Celso Machado, Constantinople, Fakhass Sico, Lilison di Kinara, Richard Séguin, Takadja, Muna Mingole, Caroline Planté, and Cirque du Soleil (the show O), to name but a few. Are there any outstanding collaborations among your encounters, in Quebec or elsewhere?

ZS: All these encounters have left their mark on me because they have allowed me to give something and to receive something too. Going towards another culture is a way for me to not limit myself to my own.

PAN M 360: In what way have these encounters with non-Senegalese artists transformed your playing and your vision of music?

ZS: In my opinion, music has no borders. These encounters have helped me to push back the limits of my kora by playing scales that were not familiar to me at first. If I decided to move to Montreal, it was to find a greater opening, new horizons, and not to limit myself strictly to my traditional learning, which I nevertheless perpetuate when the context lends itself to it. It’s therefore important for me to study other music, other melodic scales, other harmonies, and to see how far the kora can go in these different contexts.

PAN M 360: How was your experience with flamenco?

ZS: As far as I know, only the great virtuoso Toumani Diabaté and the guitarist Ketama had ever done this fusion between Mandinka music and flamenco. Personally, I learned to play flamenco with Caroline Planté, a great guitarist. It was all new to me. I then observed that flamenco was close to Berber music… very different from Mandinka music! Together, we spent a lot of time exploring to see what was possible to create and what wasn’t. I was very impressed with the way the flamenco music was played. We then composed several pieces, and kept about 10 of them for the recording.

PAN M 360: How do you reconcile your attachment to the Mandinka tradition with your experiences of hybridization?

ZS: In my songs, I recount what’s around me, what I live and what I see, while keeping my Mandinka traditions alive. In fact, all my encounters outside West Africa have always made me want to compose. These experiences have also allowed me to get to know my instrument better. You never stop learning, and that’s what inspires me!

PAN M 360: There have been major technical advances in the playing of the kora, several virtuosos are now making their mark. What are those changes, in your opinion, and how has your own playing changed as you observe them?

ZS: I’m going to give you some names of kora players that I like to listen to: Toumani Diabaté, Ballaké Sissokho, Toumani Kouyaté. Their ways of playing the chords, of using them, of adapting the kora to different tonalities, all this makes me want to go further in my research. So the kora has become universal. My father and grandfather played traditionally in Senegal, at ritual events – christenings, weddings, etc. – and it’s still played today. Later on, younger musicians revolutionised the game. Today, kora players are technically superior, limits have been pushed back.

ZS: I’ll present the music from the album Kora Flamenca with Caroline Planté, Miguel Medina, and Jean-Félix Mailloux. We had toured a little after the release of the album last February but the pandemic stopped us. Even though this concert will be presented without an audience, we will give everything we’ve got, to make sure that people enjoy watching it.

ZS: A new idea is running through my head: kora and jazz! But I also plan to tour with the Kora Flamenca project… when COVID is a thing of the past.

ZS: Thank you ! I am very happy, it is a recognition of my work done for more than 20 years in Quebec. I feel fortunate to have such a great team around me. This is my country now, I spend more time here than in Senegal, I’m happy with this welcome, I feel like I’m part of this society and this music industry. And we keep up with the good work, we are not giving up!