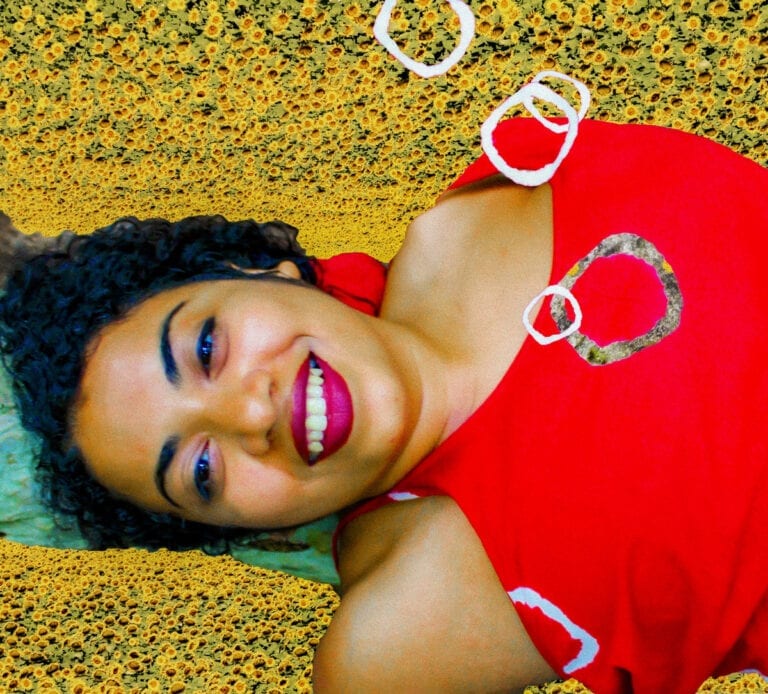 Thanya Iyer is a formidable cross-cultural creature, absorbing everything in her path!

A gifted singer, author, instrumentalist, composer, and improviser, culturally omnivorous, Thanya Iyer was born on the island of Montreal. Her family comes from southern India, and she’s been handed down the culture of the region. This is one of the transcultural materials of her cyber-songwriting art, a superb blend of human sounds and songs that was discovered in the middle of summer via Kind, an eminently appealing album on the Topshelf label. Her appearance on Pop Montréal should be noticed, needless to say.

PAN M 360: You grew up in the suburb Pierrefonds, where a large part of the Indian community in the greater Montreal area resides. First, tell us about your cultural origins and your Montreal journey into adulthood.

THANYA IYER: My parents immigrated to Canada in the ’70s and ’80s. My father’s from Mumbai, my mother grew up in Kerala. At a very young age, I learned the piano, then I studied Carnatic singing before switching to the Indian violin. There’s so much to learn! As a teenager, I formed bands and started writing songs. Then I enrolled at Vanier College to study the violin, and I met some great people there. Something always led me to music.

PAN M 360: Did you continue your studies in music at university?

TI: I did a major in music and another one in science, I have a bachelor in psychology. It took me a long time to get there because I was touring, recording, and composing during my studies, which I completed almost three years ago. When the quarantine happened, I started a music therapy program at Concordia University. Music is a powerful healing factor for so many illnesses! Last year, I had the opportunity to teach music and engaging songwriting to young people, which allowed me to heal myself because I was part of the process. Music therapy is a one-year program, possibly two. We’ll see when the shows will happen again… The core of my being is artistic? Yeah I think so. I love what the psychology program gave me, but I love performing, interacting with the audience is such a great feeling.

PAN M 360: How did this passion for music become a profession?

TI: In 2008, I started playing in different bands, writing songs, and with this band, six years ago. We played a lot in Montreal, small tours in Quebec and Ontario, and then we were invited to the United States for some film festivals. Then we realized we had to get a visa, which we did. We then traveled all over the United States and Canada until the pandemic.

PAN M 360 : Your music is not necessarily Indian, you’re inclined, rather, to mix a lot of things together. What is your vision?

TI: There is a bit of Indian music in my singing and violin playing, but this cultural heritage is only part of the sound; my songs and music mix everything I’ve learned. However, I have to remind you that Indian classical music always includes an element of improvisation and I was soon interested in musical improvisation. When I was a student in CEGEP and university, all my friends played jazz, I was even more seduced by the beauty of creating here and now, with what’s inside of me. I think that an important part of the sound of my songs comes from this freedom to improvise, even when we play live. With Daniel (Gélinas) and Alex (Kasirer-Smibert), who are my bandmates, I’m constantly imagining new motifs and melodic elements, the arrangements of my songs are constantly changing. Sometimes I make a mistake and the audience may never know because it’s part of the overall sound. And so yes, improvisation is an important part of it all.

PAN M 360: More specifically, who does what in your group, and how do you create together?

TI: Alex plays the electric bass, the saxophone, and works on electronic sounds; Daniel plays the drums and other percussion, he also programs the drum machine; I sing, play the violin and keyboards. Usually I give them a song and then we improvise a lot around its structure. The shaping happens by playing with each other, or even in concert. For Pop Montreal, we invited our friend Sophie, who creates beautiful visual projections, the music and the images generate a beautiful immersive universe. On other occasions, we invite artists who lead their own projects, for example, the guest horn players in my album. Yes, I love brass and woodwinds! And I’m actually getting into string arrangements, I think there will be a lot of them on my next album.

PAN M 360: You like open forms. So there’s no question of sticking only to the versions of your recordings?

TI: We have different versions of my songs even though there is a basic form for each one. There’s always room for change, these things revolve around a form that we try to keep open. When COVID is behind us, by the way, I plan to present three different evenings at Café Résonance: one with strings, one with brass, one with a choir. It will be a real celebration, we won’t have to worry about anything.

PAN M 360: There’s great formal work in your music. What about the lyrics?

TI: I don’t have songwriting models, my lyrics express what I feel… feelings and reflexions from my inner world. I feel something, I sing it! There are some metaphors in there but not so much, it’s still pretty straightforward in general. It does me a lot of good to express myself in this way, it’s very healing for me to do that! So I don’t think my songs fit into any model. Some of them are really composed, some of them are just one sentence, those songs are a lot like mantras. In the next album, I think that the lyrics will be a little bit longer.

PAN M 360: By the way, how is your multi-genre and cross-cultural art perceived by people in your home community?

TI: Older people, friends of my mother’s for example, might tell me that they don’t get it.  On the other hand, many younger people and musicians from the Indian community understand and appreciate. So I can count myself lucky, because I always feel the support of the community. Very often in my concerts, I see a large group of fans of Indian origin. Having said that, my goal is really not community-based, even though I share a lot with artists of Indian origin living in Canada.

PAN M 360: How do you see yourself through your multiple identities?

TI: This is something I should think more about. I am very connected to Montreal… I can see myself as a settler who immigrated here, living on someone else’s land. That’s why I try to see where we are and remember who we are. But for sure, Montreal is my home. It’s really great to live here, it’s the best!