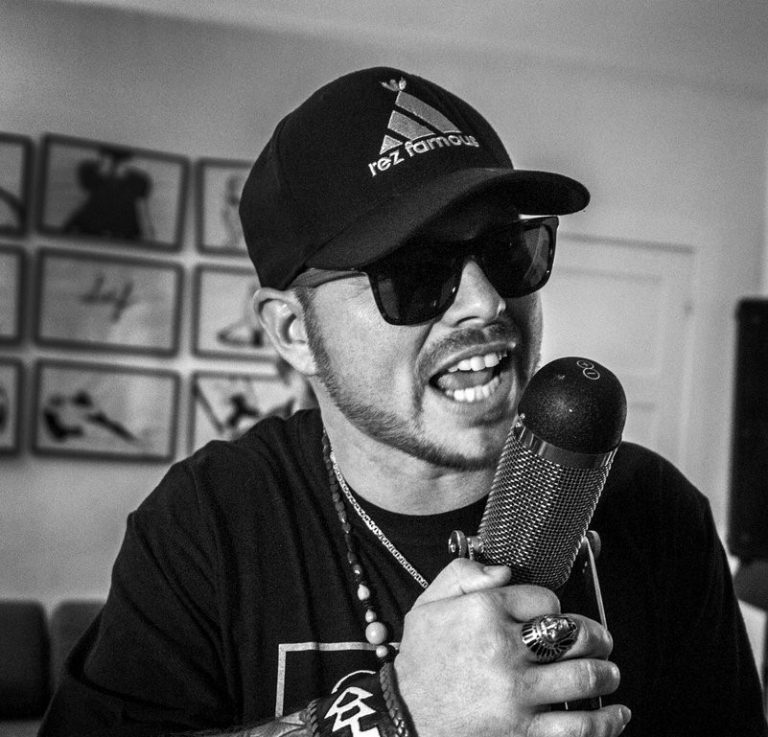 Qama’si means “stand up” in Mi’gmaq. And this is precisely the message that Quentin Condo, a rapper from Quebec’s 52nd Indigenous community, Gesgapegiag, wants to send. On stage, he goes by the alias of Q-052 and works to communicate Indigenous issues and problems.

And when he’s not on stage? Nothing changes! Not only is he still active in the political life of his community, but he also makes sure to teach his children the ancestral knowledge of his people. And unlike many others, Q052 was quite comfortable with the arrival of the COVID-19 pandemic. In addition to working on future projects, he took advantage of this precious time to remind his offspring of the importance of nature and the need to take care of it.

A good listener, Q052 doesn’t go easy on his interlocutor. He doesn’t hesitate to talk about the colonialist and racist tendencies of governments, to recall the murders and disappearances of Indigenous girls and women… He doesn’t talk about a single problem, but rather about finely interwoven and, of course, complex issues.

His tone is sharp, dry, unequivocal. Refusing to put on the white gloves, he reminds us of what is sometimes so easy to forget: Canada is guilty of an ongoing genocide.

Q052 has only two albums to his credit (2019’s Qama’si and 2018’s Rez Life, the latter of which was nominated for an Indigenious Music Award in the Best New Artist category) as well as a few singles. Drawing from the codes of old-school rap, his music is reminiscent of the rap-rock ardour of Rage Against the Machine, or the nuanced boom-bap of A Tribe Called Quest.

Fans will have to be patient – although a new project is waiting for release, Q052 will not make it available until 2022. In the meantime, PAN M 360 met with him to talk about his art, his ambitions, and especially about the performance he will be giving at Montreal’s International First Peoples Festival.

PAN M 360: Can you talk a little to us about your community? What do you like most about it?

Q052: I’m from the Mi’kmaq community of Gesgapegiag, one of the three Mi’kmaq communities in Gaspesie. I grew up a little bit in and out of the reservation, because my mom is Irish-American, from the Boston area. I have mostly good memories from my childhood, with my cousins, my aunts and my uncles, doing a lot of fishing, a lot of hunting… A lot of arts and crafts… You name it, you know? That’s the way it is in indigenous communities, since we have very large families.

PAN M 360: Your father is a member of the Mi’kmaq community and, like you already said, your mother is Irish-American. What’s your relationship with English, since most of your songs are written in that language? Is creating an album in your native language a future project of yours?

Q052: Yeah! So, for the language aspect, in our community, Mi’kmaq is still spoken very much. My father was fluent in that language, but still learned English and French. My mom was speaking English too, obviously, but my dad never spoke to us in Mi’kmaq, just for the fact that he is a residential school survivor. So, he believed – well, was forced to believe – that speaking his own language was bad. And he wanted me to be able to master English and French, so that I’d be able to fight the government and to express the needs of Indigenous people in their language. The Mi’kmaq that I learned was with my friends and with other members of my family. But my dad always said to me, “you can learn Mi’kmaq any time you want, but you need to learn the white man’s language. Just because it’s a white man’s world and you need to survive in it.” So, I don’t speak fluently the way I would love to, but I do get by pretty good. And the song I will be performing on Friday night with Samian will be in Mi’kmaq.

PAN M 360:  How has been the pandemic for you, creatively? Did you use it to make new music?

Q052: For me, the pandemic was a blessing! And I don’t know if you remember, but right before the pandemic, we were blocking the railroads, because we were saying that we need to stop the way that we’re moving forward right now, and we must change the way we do things! We must be more aware and respectful of Mother Nature. And the government said “No, that’s impossible, economically.” Then, Covid came along and said “hold my beer.” So yeah, to me, it wasn’t a problem at all, I was ready for the reset. I even took the time to take my kids back to Gaspesie. We went to the woods and did a lot of traditional activities.

PAN M 360: What kind of ‘’activism education’’ will your children get from you, of course, but also from your own father, who I believe is an important leader of your community? What do you want to teach them?

Q052: Obviously, the environment is a priority to me, just because if we keep destroying it, we’ll soon be dead, right? We need to address the killing of Indigenous women, the mass incarceration of Indigenous people, the list goes on and on… But I try to touch base of every single one of them.

PAN M 360: I heard you were a politician before, why did you stop and chose music instead?

Q052: Hip-hop has always been in my blood, right? And it’s all because the hip-hop culture is very similar to Indigenous culture. The MCs are very similar to our chanters, the breakdancers are very similar to our dancers, and the graffiti writers are very similar to our art and crafts… And on top of that, my father was – and still is – very into political changes, so he wanted me to follow that, right? So, I grew up surrounded by the desire for social change, I did two terms of political work, then I decided to step away ‘cause I felt like… I could do more through music than politics. You have a lot of restraint in politics, you can’t always say what you want. In hip-hop, you can talk about things the way they really are.

PAN M 360: Are you currently working on a new project?

Q052: I’ve been steadily working through the pandemic, doing collaborations with other artists, I’ve got a track that will be coming out with Violent Ground, I’ve got a track with Samian, one with Melodie McArthur. I also have a whole album recorded and ready to go but I’m only putting it out in 2022. So, I’ve been very active writing, recording, just having a great time doing those things. There’s powerful stuff coming.

PAN M 360: When people listen to your music, what emotion, what response do you want to get from them?

Q052: What I wanna do is to hit you in the conscience. I want people to be aware, to be conscious of what’s happening. And I think the way that I deliver it is in your face, it’s direct and I think people need to hear it that way, rather than the political way. I don’t want to be nice about it, you know? We need to hear it, even if we don’t like it.

PAN M 360: Can we hear a certain evolution, a growth when we listen to your music. Did your vision or attitude change along the way?

Q052: Yeah, if you heard the first album I put out, I’m more in the angry, direct approach. My second one is more R&B, more of an educational approach… The next album is going to be a mix of educational and anger, but a lot of rock! I recorded it with my full band.

PAN M 360: It seems like Samian and yourself are working on a set for the festival next Friday, can you talk a little bit about it?

Q052: Actually, I’m working on two collaborations! So, Wednesday night, I’ll be performing with NEM, Nouvel Ensemble Moderne, and Forestare, alongside Laura Niquay and Anachnid, two wonderful Indigenous artists. We’ll perform a song with a whole orchestra and that’s going to be a 20-minute song. And then on Friday night, it’s Samian’s record launch! We collaborated for a track in his new album, and we’ll do it at the show! We’re very excited about that!