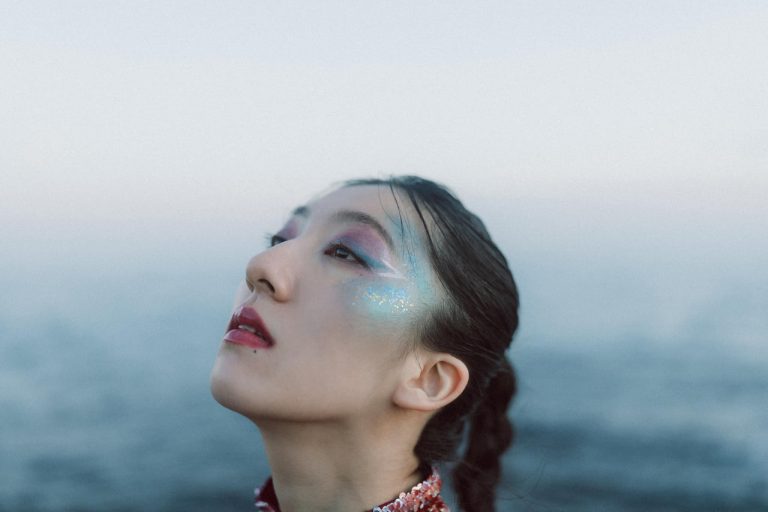 Haruna Kimishima is known in Japan as Haru Nemuri. Without claiming to know much about the current Japanese musical spectrum, it is easy to acknowledge the talent of this artist who will probably make a big splash at Pop Montreal this Saturday.

PAN M 360 just jumped on the bandwagon, we really insisted on making the following conversation with Haru Nemuri possible.

PAN M 360: How do you see the progression of your craft  since the beginning?

HARU NEMURI: I think that progress is made by never stopping to question both society and myself.

PAN M 360 : Are you self-taught or also have you been trained in music?

HARU NEMURI: I am self-taught.

PAN M 360 : How did you build this language of sounds?

PAN M 360 : Of course, different crucial influences are observed :  hardcore punk, avant rock, rap, avant pop, noize, synthpop, post-minimalism, nujazz, to name a few. What would be your own description of styles and influences from Japan, Occident and other parts of the world ?

HARU NEMURI: When it comes to Japanese music, I first fell in love with bands that are categorized as “ROCKIN’ON-kei (style)”. As for western music I like alternative and hardcore bands and in Russian punk and hip-hop.

PAN M 360 : There seems to be no separation between experimental culture and popular forms in your approach. How do you see it yourself?

HARU NEMURI: To me I think it’s interesting to have both coexisting and I’m consciously creating that state.

PAN M 360 : So you are « closer to the ideal », better in composition and playing. How do you work in your studio?

HARU NEMURI: I can’t really see the destination of where the ideal is as of yet, but I think so. Basically, I make all the songs at home and then in the studio I’m often taking time recording and spending time mixing.

PAN M 350 : For you, what are the main differences between « LOVETHEISM » album and « SHUNKA RYOUGEN »?

HARU NEMURI: I think “SHUNKA RYOUGEN” has a blank space where there are more existences of others.

PAN M 360 : The musicianship seems to be excellent! Can you tell us how you have built your band?

HARU NEMURI: Depending on the situation, the case, and the piece of music, I decide each time who I want to have them join the performance. I decide who to play with based on if they are not discriminatory and cool.

HARU NEMURI: Depending on the song, guitar, bass, and drums are often performed by musicians who specialize in each.

PAN M 360 : How is it translated on stage? What is the gear? Who is playing with you? What is the visual aspect of your show? What is the performing aspect? Are there a lot of electronics involved?

HARU NEMURI: I often hear my own sound through a monitor. From the computer through an interface the sound is outputted from two guitar amps, one bass amp, and speakers. The mic is passed through a vocal effector. My manager is operating the computer and controlling the sound to come out.

PAN M 360: Most of your international fans do not understand the Japanese language. They feel the poetic intentions and they love the music. Is it okay with you?

HARU NEMURI: Of course. It gives a lot of meaning to my choice of using music as an expression.

PAN M 360 : Do you see your craft as songwriting or music composition including words and  melodies through a musical proposal?

HARU NEMURI: I think it would be the second one. (music composition including words and melodies through a musical proposal).

PAN M 360 : You can play in many kinds of festivals. What are your favorite events ? Where do you mainly perform in Asia and in the rest of the world ?

HARU NEMURI: Every event I’ve attended so far has been great. I don’t actually have a specific venue that I always perform at but in Asia it would be in Tokyo and Taiwan. For the rest of the world, I go to Europe and America. I’d love to go anywhere.

PAN M 360: So this is it! Thank you for your answers and have a safe flight to Montreal!

HARU NEMURI: Thank you so much!