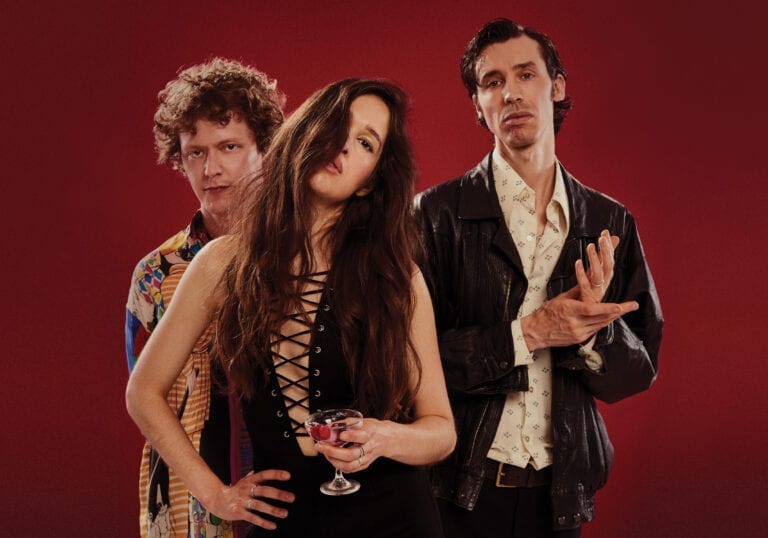 Will Marie Davidson’s career be propelled by Renegade Breakdown, her new album of… pop?!

Nevertheless… listen carefully to the previous recordings of the musician, writer, composer, and performer. Several popular styles that can be spotted in the mix of her new opus were already present beforehand. This time, however, the pop lights flash much brighter.

Are they likely to dazzle, or blind?

No matter what fans of the Montrealer and her two acolytes from L’Oeil Nu will think, the choice is perfectly clear – as evidenced by this conversation with Marie Davidson, Pierre Guerineau (Essaie Pas, Feu Saint-Antoine) and Asaël Robitaille, producers of Renegade Breakdown, officially launched on September 25 under the labels Ninja Tune (world) and Bonsound (Canada).

PAN M 360: We crossed paths a few months ago and found out about your admiration for Fleetwood Mac, which might surprise many. Where does this taste of pop come from?

Marie Davidson: I’ve been listening to Fleetwod Mac since I was 17, it’s really nothing new. I can tell you almost everything about Stevie Nicks! (laughs) As a music lover, I really know jazz. Our song “Just In My Head”, by the way, is a jazzy ballad that pays tribute to those influences. Also, I became aware of contemporary music because of D. Kimm (my mother) when she was performing poetry shows with avant-garde instrumentalists.

Asaël Robitaille: For my part, I have a background in composition, Serge Provost’s class at the Conservatoire de Musique de Montréal, I know contemporary music from the classical tradition, then I branched out into prog, jazz fusion, ambient, film music, and more.

PAN M 360: When an artist associated with cutting-edge trends goes pop, how should they go about it? Is there a risk of losing out on all fronts, on the cutting edge and on the mainstream?

PG: We’ve discussed this among ourselves and indeed, we concluded that we’d ignore this risk. Before this album, we’d worked on the rhythms, the textures, the sound design, we wanted to go back to song creation. So our refinement acquired in electro is at the service of solid songwriting. We know that this is our strongest work.

MD: Yes, it’s very different from previous albums, but we were willing to take the risk. In terms of audience reaction, it’s out of our control. By maintaining the same style to absolutely please the audience, the music can lose its soul. I’m known for not compromising, neither are Pierre and Asaël. We’ve done the work, we like this album. We know that Renegade Breakdown can seem slightly disparate, but we find a real cohesion. The link is my voice, my stories, my expression.

PG: There’s a variety of genres in this album, we don’t have a problem with that. People listen to all kinds of music today. People are thirsty for it. Personally, I get bored after three or four songs when an album is monolithic. What stands out is honesty, sincerity, hard work, integrity.

AR: There’s not as much risk as that, it seems to me. The first two singles on the album are closer to club music, they are a bridge between what we know about Marie and what follows. It’s a culmination, I think, of the work done in previous years.

PAN M 360: What is the distinction between Marie Davidson, L’Oeil Nu and Essaie Pas ?

MD: After New Path, we decided to put the Essaie Pas duo on indefinite pause. I had signed for two albums with Ninja Tune under my name, I couldn’t change the deal to the second one. But the people at the label knew that the second album would be recorded with a band, they were really excited about the idea.

PG: So there’s Marie the frontwoman and there’s a band behind her, L’Oeil Nu. What’s different from the previous recordings is that Marie’s voice and writing are behind the songs.

AR: There is a distinction to be made between Marie and L’Oeil Nu. Already in 2011, Pierre and I started this project. We had then undertaken to create a song each night inspired by the European soundtrack of the ’70s – Vladimir Cosma, Ennio Morricone, Francis Lai, Serge Gainsbourg, etc.

PG: We’d recorded demos that remained dead letters, with a few exceptions. Then we started talking about a pop project with Marie.

PAN M 360: In Essaie Pas and Marie Davidson’s solo projects, we observe elements of French pop, electro-pop and other mainstream sources in which you dip your electro experiments. This time, the pop side is more present than ever. How did you organise all this?

MD: We didn’t look for a style or a type of instrumentation, we looked for energy and expression itself. If we felt something, it was okay. For example, “Worst Comes To Worst” is disco funk, “Renegade Breakdown” is disco rock, “Center of the World” is influenced by Robert Wyatt’s album Rock Bottom, among others. You can hear Pink Floyd as much as you can Mylène Farmer or the Skatt Bros. It’s the expression of our pop universe.

PG: That was the idea: we would make a pop/songwriting album, and it took all these forms. But it’s still who we are, it’s done in our own way.

PAN M 360: What was your methodology?

MD: Until now, my work has been based on creating rhythmic and melodic sequences. This time, I wanted to get out of the loop and bring back “real” instruments. I would come in with my melodies and lyrics, and they would play the rest. I hardly played any instruments but we were always together in the studio.

PG: So Marie would record the skeleton of the songs with her dictaphone and come with us to the studio. Relatively limited means forced us to use virtual instruments, in part.

AR: Specifically, the harmonium, woodwinds and strings are virtual, while the keyboards, guitars, bass, and drums are real for the most part.

MD: Jesse Osborne-Lanthier joined us, he took part in the arrangements, mixing and post-production.

PG: When you’ve been working for several months on an album, it’s good to have the ear of someone you trust. It’s always a great help, and that was Jesse’s role.  So we created hybrids, with real instruments and with virtual instruments. At the end of the day, we really like this postmodern side.

PAN M 360: The lyrics to Renegade Breakdown‘s ten pop songs aren’t too rosy, are they?

MD: I had a lot to tell about my life over the last few years. These songs talk about my artistic career, my work, my relationships, including my relationship with Pierre, and also my relationship with myself. Among other things, I talk about my feeling of isolation. Very often I was alone on tour, alone in my hotel room, alone at the airport, alone in the club, alone with drunk or high people, alone in the line of toilets, alone at customs with my equipment, alone with myself. It’s also an intention to get to the point, to be more intelligible and more vulnerable. For example, the track “Lead Sister” pays tribute to Karen Carpenter (The Carpenters), who died of anorexia. It has something to do with my personal background; I used to be anorexic, I’ve been in remission for several years, but it’s always going to be sensitive.

PG: For “Lead Sister”, we worked a bit like Gainsbourg, that is to say, by transposing a classical melody into the public domain. We took up the Adagio by the Italian baroque composer Allessandro Marcello. When Marie arrived with the text, it set the tone, we treated it with inspiration.

MD: It’s a nightmarish song. Anorexia can lead to death. It’s the descent into hell for the quest for perfection and performance, it’s so destructive! In addressing the obsession that killed Karen Carpenter, this song stems from the spirit of the album Working Class Woman.

PG: That’s why we’re taking “Lead Sister” and “My Love” from self-deprecation to self-love and remission. It moves me enormously.

AR: In fact, this sequence was better positioned at the end of the album, because it’s a death followed by a resurrection.

PAN M 360: This album has three songs in French and one bilingual, among the ten. A deliberate choice?

MD: Bilingualism is very important to me. French is my mother tongue, the one I know best. English is to be understood by anyone. From the beginning, we have been aiming for an international career, we have never been interested in being stars only in Quebec. We love to travel, we have friends all over the world. This doesn’t prevent us from honouring our cultural roots.

PAN M 360: How will all this translate on stage?

MD: There will be four of us for the show, when the public-health conditions are favourable for going on tour, obviously. Pierre and Asaël on keyboards, guitars and electronics, and me on vocals. A drummer will join the band. And when our budget allows it, we’ll hire a bass player.

AR: I’m the only one to have played several instruments in real time over the last few years, Pierre hadn’t played guitar for five years before getting back into it. It was laborious at the beginning, but with each rehearsal, he finds his bearings and skills again.

PG: So it’s going to be a hybrid form. Instruments and computers. I have the impression that more and more people are fed up with music performed in front of an audience without instruments.

AR: We want to do the concert hall circuit and not really the club circuit. Because that wouldn’t make sense with the instrumentation we have now.

MD: We’re going to change the context of presentation, we’ve already switched tour management to do so. Until then? We’re concentrating on the music.  Turning point ? I hope so !