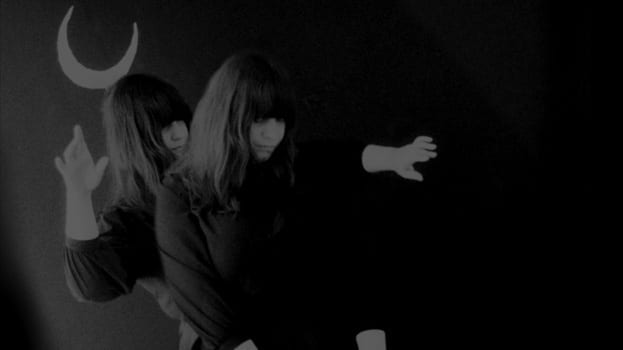 The Icelandic Thereminist welcomes listeners to her imaginary monster realm, with her eerie new album Sprungur.

2020 marks the 100th anniversary of Leon Theremin’s weird and wonderful electrophonic instrument, unique in that it’s played without physical contact. With its association to science fiction and horror cinema, its backstory of Cold War intrigue, and of course its unmistakable, otherworldly sound, the obscure Theremin does have a devoted following and skilled players. Among the latter is Hekla Magnúsdóttir, whose music for Theremin (with voice, and some piano) fits comfortably into the cluster of atmospheric post-rock sounds emanating from her native Iceland. Her new album Sprungur isn’t exactly a comfortable listen, though, as alluring and mesmerizing as it is. PAN M 360 corresponded with Hekla on the subject, by way of electrical impulses cast into the aether.

PAN M360: You’re self-taught on the Theremin. Looking back now, what’s something you wish you’d known about it earlier, and conversely, something you don’t think you’d have discovered, had you been formally trained?

Hekla: I wish had I known how to properly tune it. I had many confusing moments, which probably could have been avoided had I had a trainer or any learning material. However, I am happy that I was not locked into a certain technique and that I was able to develop my own style, getting inspired by other Thereminists and incorporating some of their techniques. I don’t think any teacher would have condoned me playing the Theremin with a slice of pizza in one hand.

PAN M360: It’s been said that the saxophone is the instrument closest to the human voice, but listening to the Theremin, I’m not certain the sax can alone claim that distinction. What do you think?

Hekla: I agree. The Theremin can be heard in many renditions of songs that originally were written for a singing voice and I think it works beautifully.

PAN M360: You’ve just released your second album, Sprungur. How would you compare Sprungur to your first album, 2018’s Á?

Hekla: This album features piano, which I think grounds the music more, and I would say it’s a bit more accessible because of that.

PAN M360: I think it’s a very nice gesture to start with a brief welcome. Having said that, “Velkominn” is a minute of pure apprehension! It seems to advise the listener, enter at your own risk. How would you describe the themes and emotions of Sprungur?

Hekla: This album has more of a concept than Á. On “Velkominn”, my Theremin goes through distortion and filters, and it ends up sounding like monsters welcoming you into their world.  The whole album is kind of a soundtrack to an imaginary monster realm. And there is an old Icelandic lullaby, “Sofðu unga ástin mín”, which I found really terrifying to listen to as a child, so I found it fit very well as well.

PAN M360: The piece “Aftur Og Aftur” really showcases the low-end bass of the Theremin, which is generally overlooked and underused.

Hekla: I really like putting a lot of bass into my live performances, and a lot of distortion, and getting random, uncomfortable sounds – it’s often a bit of balance to get it right in concerts because the lower frequencies can make everything shake.

PAN M360: Are you still playing in the surf band Bárujárn? That’s such a great context for the Theremin, though very different from your solo work.

Hekla: Yes! We have recorded our surf symphony for the third time now, and I think it might be the charm. It is a lot of fun to do that kind of music on the Theremin. I started out just doing sound effects on the Theremin with them, when I’d just bought my first Theremin. I think it really helped me to not give up on the instrument, because playing that kind of music was just a lot of fun and I felt no pressure to actually properly “play” the Theremin. But over time I started doing little hooks and bits, and got better and better, so I really recommend beginner Theremin players join a surf band.

PAN M360: The Theremin celebrated its 100th anniversary this year. What do you imagine people will be doing with Theremins, 100 years from now?

Hekla: That is a fantastic question. I think every household will have a Theremin by then.