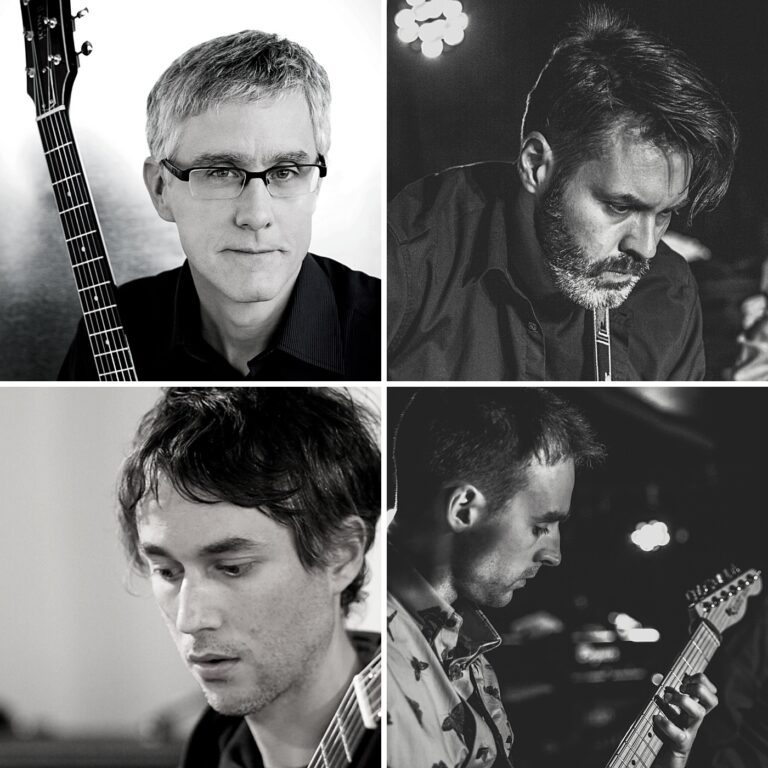 Entitled “Planet Happiness”, this micro-festival will explore the electric guitar in a contemporary music context. On Monday, May 9, 7:30 p.m., in the Wilder Building, the first program will feature Belgian guitarist and composer François Couvreur, the teotwawki quartet and Montreal composer Kevin O’Neil. On Tuesday, May 10, also at 7:30 p.m., a second program will feature the Instruments of Happiness guitar quartet led by Tim Brady. Three new works will be performed.

PAN M 360: So the Instruments of Happiness are about to conquer an exoplanet?

PAN M 360 : You celebrate the electric guitar as a vehicle for contemporary music. We are seeing more and more musicians and ensembles doing so. How would you assess this impact in the musicosphere?

TIM BRADY : The electric guitar is a young instrument – it was only officially invented in 1932. And it is a distinctly North American instrument, it is quite different than the European classical guitar, in technique, repertoire and culture.  So it is still growing – it started in jazz, then blues, rock n’ roll, country, progressive rock, then experimental music, and now composers from the notated music tradition are finding out what amazing sonic resources it can offer.  With a few pedals and a good amp, it’s a mini-orchestra.

This transformation and evolution seems to prove the point: in art, nothing is static. The classical European orchestra (which I love) is a victim of narrow traditions and a very limited repertoire.  It can’t really grow and adapt with the times. They try, but it is a bit of a “square peg in a round hole” – the orchestra is mostly about the past, not about the future…  I hope the electric guitar can avoid that problem of getting “stuck in time”, and that we stop trying to find new artistic ideas.  For the past 90 years at least, the instrument and its music has kept evolving, and chamber music for the electric guitar is just one more area to discover with the instrument.

PAN M 360: Will this micro-festival be repeated? What is the context of its foundation?

TIM BRADY: This is a somewhat of an informal project. Yes, it took several months to put together, but it was a combination of Covid necessity (some cancelled shows earlier in the year) and a chance meeting with two young international guitarists – François Couvreur (Belgium) and Felipe Alarcon (Chili) – that brought this together.  It was a bit spontaneous and unexpected. But for only 2 concerts, in packs in an amazing range of artistic ideas and new work.

Instruments of Happiness is working on several other big projects – a concert at Salle Bourgie, another 100 guitars event, a site-specific opera – so there will always be new music for guitar lovers to hear in Montreal.  But we don’t want to tie ourselves to a festival format every year.  Montreal has enough festivals!!

PAN M 360 : Can we know more about this work and its composer/performer?

TIM BRADY: Andrew Noseworthy is originally from a small town in Labradour and he somehow ended up studying contemporary music and guitar in New York and London (ON). I’ve known him for 10 years, from his student days.  He is very funny and chill, but totally serious about creating great music with the electric guitar. He’s become the “go-to”, first-call chamber guitar player in Toronto in the past few years,  An artist who is going to have an impact.

TIM BRADY: We could talk about gear for hours, in fact, sometimes we do!  But our show uses very modest setups: overdrive distortion, volume pedal, harmonizer, delay, maybe an expression pedal, and then a slide and e-bow to expand the sonic palette.  In the Amy Brandon piece, we use violin bows, cheese graters, and dessert bowls! – but that’s a bit of an exception.

PAN M 360: How did you choose François Couvreur?

TIM BRADY: Chilean guitarist and composer Felipe Alarcon put us in touch, through ZOOM. François had some interesting ideas, and he has his own ensemble in Liège (Ensemble Hopper), and he is VERY into chamber music.  He wanted to present a range of European music – which is a great balance because we almost never do European music (nothing against it just hasn’t happened). Plus he plays solo for his set – which is a nice contrast to the two quartets on the rest of the festival.

TIM BRADY: Kevin O’neil is an emerging composer guitarist who has worked with us in the 100 guitars project several times.  He loves the electric guitar, and wants to explore drone and ambient music.  The electric guitar is PERFECT for that!  So he has been working with his own, new quartet to create his own sound.  A great idea.

PAN M 360: What are the distinctive features of its electric guitar quartet?

TIM BRADY:  We use an amplifier as an INHERENT part of the sound – this changes everything. ANY sound can be loud, ANY sound can be soft. This gives us a dynamic range and a choice of timbres that is truly unequalled. A min-orchestra. And our electric wire means we are intimately connected to electronics.  Electronics are not just something we add later, it is what we do. Culturally, we come from the aural tradition – jazz, blues, rock – which has little or no connection with to chamber music or the classical tradition.  Personal expression is critical – we don’t want to hear “an electric guitar being played” – we want to hear It played by Charlie Christian, BB King, Jimi Hendrix, Eric Clapton, John McGlaughlin, or any of the amazing young players on Youtube. So it is a weird and wonderful dance trying to take this highly idiosyncratic North American solo instrument from an improvisational background and pass it through the “filter” of notated chamber music.  It leads to some totally unexpected and remarkable results – which you can hear May 9 and 10!

TIM BRADY: In the May 10 concert, the quartet formed by myself, Jonathan Barriault, Simon Duchesne and Francis Brunet-Turcotte will perform works by François Couvreur and Chilean composer Felipe Alarcon, as well as five other pieces (commissioned works) that will explore the diversity of styles and visions of contemporary music creation for electric guitars, visiting electroacoustic, minimalism, musique actuelle, improvisation, chamber music and micro tonality.

PAN M 360: This quartet configuration has matured. What do you think of this band today?

TIM BRADY: IoH has been around for 8 years now, so we know how to work together.  We know our strengths and weaknesses, and how to make the most of our rehearsal time. We always try to give the listener the most passionate and expressive performance possible – full of musical details and surprises.  Also, we tell silly jokes, I complain again about being so old compared to the other three, we laugh, talk about pedals for a minute, and then get back to work.

PAN M 360 : Can you tell us more about each of the works in the program?

TIM BRADY: Among these pieces will be those of the three Canadian composers Corie Rose Soumah (QC/NYC), Ida Toninato (QC) and Amy Brandon (NS) exploring the beauty and fragility of the sound of the instrument with their creations. There will be those of François Couvreur (Belgium) and Felipe Alarcon (Chile) immersing us in chamber music with transparent and vibrant timbres. Finally, we will discover those of Jose Segura (Quebec) and Robert Davidson (Australia) offering very idiomatic and robust works, full of energy and rhythm.

PAN M 360: What do these works imply for the performers?

TIM BRADY : There is a lot of work making sure the composer’s ideas are really well imagined and laid out for the instrument.  We have to work closely with composers, as it is a slightly odd instrument – that amp, all those pedals! Plus – music schools still spend all their time teaching composers how to write for violin and clarinet…so there is usually a steep learning curve, and lots of collaboration.  The 4 guitarists take a very “hands on” approach – both literally and figuratively!

The Planet Happiness event will also be the occasion to celebrate the release of a new CD for Instruments of “Happiness: Slow, Quiet Music in Search of Electric Happiness” (Redshift Records).  This project, which brings together four Canadian composers around the theme of slow, quiet music, was originally presented in February 2020 at Église le Gesù in Montreal. The CD includes works by Louise Campbell, Rose Bolton, Andrew Noseworthy and Andrew Staniland.

TIM BRADY: The CD is the music from our last big pre-Covid concert – Feb. 15, 20120.  It was a surround sound event et Église Le Gesù.  The public was surround by the 4 guitars, and we played slow quiet music designed for the 7 second reverb time of the church. It was quite magical.

PAN M 360: Tell us about each work in the program and its creators.

TIM BRADY: Each composer has a different path into music: Louise Campbell is a clarinetist and music educator, Rose Bolton plays Irish Fiddle music and does electronics and film scores.  Andrew Noseworthy is an emerging guitarist from Labradour/Toronto and Andrew Stanliand is an ex-jazz guitarist turned composition professor.  Each piece on the CD has a different “vibe” but they all help us create an project with “slow quiet music in search of electric happiness.”

PAN M 360: How do you see the studio qualities of these works?

TIM BRADY:  I’ve worked with the same sound engineer for 33 years -we’ve tried every mic in every position.  We now have a good idea of how to get a rich, detailed and expressive sound out of the solo electric guitar, and the quartet. I’ve always been interested in recorded sound – it seems a very natural extension of the electric guitar.  If you’re going to bother recording a sound, might as well make it sound good.

PAN M 360: Instruments of Happiness are here looking for quietness and a certain slowness… And what more?

TIM BRADY : What else do you need?

TO ATTEND THE 2ND PROGRAM OF PLANET HAPPINESS, IT’S HERE