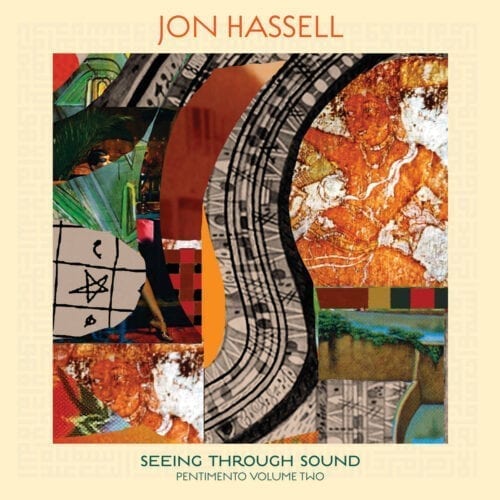 Rather than offering a single 75-minute disc (or a double album of two LPs, since vinyl has regained favour), Hassell preferred to split Pentimento‘s pieces into two volumes. Most of the tracks on this second volume were therefore recorded at the same time as those on the first, but when Hassell listened to them again after letting them rest for a while, he was not entirely satisfied. So he began to rework them. As a result, on this second volume, we can “see through the sound”, as the title rightly indicates, these levels in the background. The elements in the foreground seem to stand out even more clearly, and the textures are at once better defined, more varied and even more abundant. In the first piece, “Fearless”, for example, there’s the sound of flowing water, a raspy intermittent drone that sounds like a contrabass clarinet note, a rhythmic pattern provided by a guitar and keyboards, chords that evoke Portishead, some machine sounds and above it, Hassell’s hovering trumpet. Then in the back, at times, layers of another pattern appear and, in the distance, Hugh Marsh’s violin… Some pieces are vaporous, like “Timeless” and “Moons of Titans”, others are more rhythmic and bumpy, like “Unknown Wish” or “Reykjavik”, with their more experimental sound fragments and glitch. On the gliding “Delicado”, we even think we recognize, in the filigree, the echo of some of the trumpet player’s old pieces. On the aptly named “Lunar”, the judicious yet abundant use of echo really transports us to another planet. The last one, “Timeless”, is an utterly hypnotizing ballad with intersecting melodic lines, enhanced by all sorts of little rhythmic noises, some of which evoke teletype machines, with the various patterns seeming to fluctuate from one level to another. As long as you listen carefully, the whole thing will leave you dumbfounded.