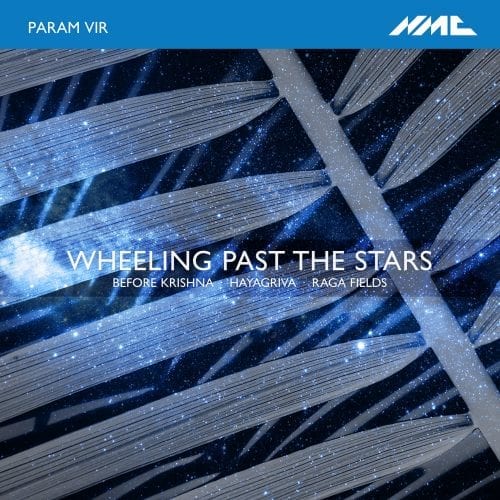 Both Indian and Western classical music have an immense baggage of depth, genius, innovation, complexity and skill taught from generation to generation. Yet they know very little about each other, let alone rub shoulders. But that seems to be changing! Param Vir is an Indian composer based in the UK, fusing the sophisticated heritage of his homeland with that of contemporary European music. Wheeling Past the Stars presents four of his compositions for ensemble, two of which feature soloists.

If you’re familiar with Ravi Shankar’s two sitar concertos, don’t expect to find the same kind of cinematic neo-romanticism here. Param Vir is far more steeped in the Western scholarly avant-garde than Ravi Shankar ever was.

The most interesting piece on the album is 2014’s Raga Fields, a dance-like, post-Boulézian exploration of this ancient art form from the South Asian peninsula. For me, the marriage of the complex, swirling colours of the sarod (played stunningly by Soumik Datta!) and the Klangforum Wien conducted by Enno Poppe is an exceptional revelation! The two ultra-scholarly worlds meet here in a rich and respectful dialogue where the dialects of each musical world dare to have a frank discussion without seeking fusion at any price. The final result is surprising because if the Western ensemble does not make a useless effort to “imitate” Indian music, the very nature of the contemporary harmonies brings a real sonic and intellectual rapprochement. The proof is in the pudding that these two richly sapient traditions have what it takes to launch a new vision of scholarly music, a vision that has the potential to fill the 21st century with fascinating masterpieces!

The other three works on the programme date from a longer period and seem to reflect a time when Vir was still strongly influenced by his academic apprenticeships with Peter Maxwell Davies and Oliver Knussen. Before Krishna (1987) is an overture for strings in which the relatively rigorous use of the twelve-tone series is recognisable, while Wheeling the Past for soprano and cello (2007) has a lyricism that might be likened to that of George Benjamin (Written on Skin), but less sumptuous and more pared down, even austere.

Hayagriva (2005), for 15 musicians, is an evocation of a character from sacred Indian and Tibetan legends, an avatar of Vishnu associated with wisdom and knowledge. An ecstatic score reminiscent of Wolfgang Rihm’s glittering universe, Hayagriva is a delight for ears accustomed to this kind of atonal psychedelic colours. Here, it is the Schoenberg ensemble that beautifully draws a panorama that is both strange and inspiring.