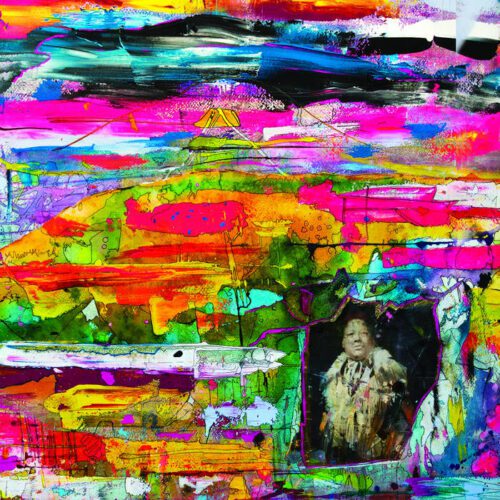 The Medicine Singers collective was born out of a chance meeting between Algonquin powwow ensemble Eastern Medicine Singers and New York-based Israeli filmmaker and guitarist Yonatan Gat, when the latter invited the band to join his 2017 SXSW concert. This impromptu collaboration led the musicians to the stages of the biggest festivals in Europe and North America.

The next logical step was to create a debut album. Released by Stone Tapes, the new sister label of Joyful Noise founded alongside Gat, as well as via Montreal’s Mothland label, Medicine Singers draws on Native American powwow music and musical improvisation. With this first statement, the Medicine Singers have created a fascinating musical experience, moving through a kaleidoscope of styles, from psychedelic punk to spiritual jazz and branching out into electronic music and garage rock, especially the excellent cover of Shawnee guitarist Link Wray’s “Rumble.”

The songs on the album range from contemporary pieces written by the Medicine Singers to traditional melodies dating back centuries. More than just a collection of songs, this album is not only an innovative and successful didactic and cultural crossover, but, as Medicine Singers leader Daryl Black Eagle Jamieson aptly puts it, “a vessel of knowledge, history and language.