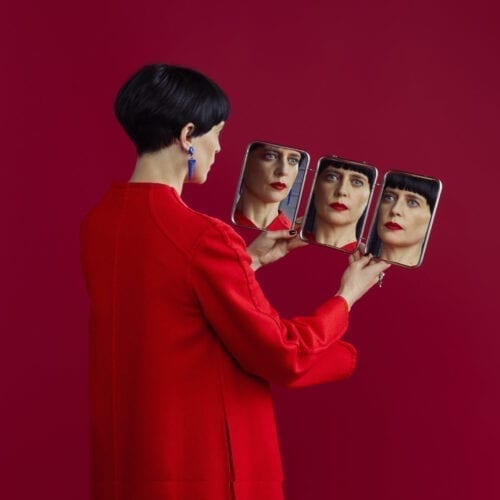 Earlier this year, Angèle David-Guillou, a French composer and performer based in England, concluded the arc of her Mouvement trilogy. Though initiated well before the first fit of coughing in Wuhan, these works – particularly the concluding Sans Mouvement, an almost hour-long solo organ meditation – provided an excellent reflection of the global lockdown, thick with churning, compressed sentiments and toying with the very idea of time.

It’s unlikely that David-Guillou had insider information about the bug back then, and likewise doubtful that she could have predicted to the week the announcement of a vaccine, a light at the end of the tunnel. Regardless, her timing is again excellent. A Question of Angles is again an ensemble work, like 2017’s En Mouvement, with over a dozen string and saxophone players, supplemented as is seen fit, for instance by a soaring Theremin on the title track, or the choir on the concluding piece, “Quid Pro Quo”. It’s not only a collective effort, it’s also bold, effusive, and extroverted music, a righteous release. This is apparent from the first volley, the forceful “Valley of Detachment”, a piece so martial that the “detachment” in the title might be a military double-entendre.

En Mouvement contained several explicit pastiches, most prominently of Philip Glass and Michael Nyman, and their spirits linger over the entire proceedings of A Question of Angles – David-Guillou makes no effort to obscure that. From Glass she borrows the strident, loping melodic patterns, dramatic valleys and peaks in rapid succession, and from Nyman, the intractable drive, the pugnacity and piercing ache. She has her own voice, though, and like most of us, much to say at this point in the global ordeal.