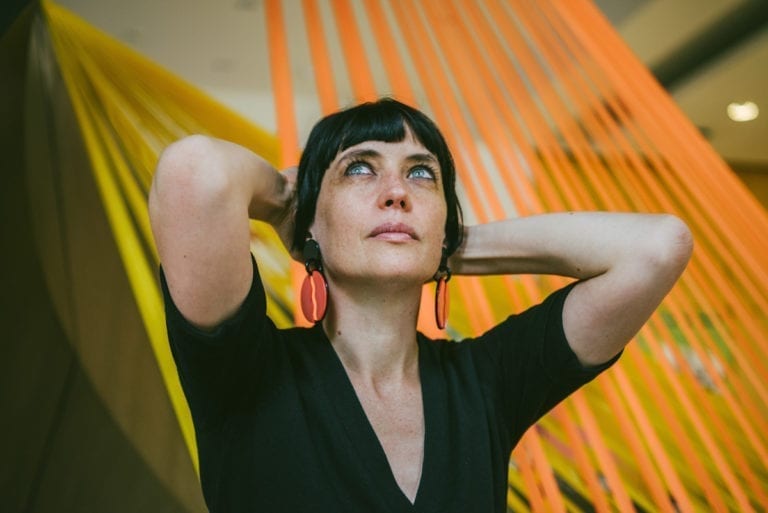 Time and motion are of concern to any musician, any factory worker for that matter. They are however of almost metaphysical fascination to Angèle David-Guillou, a French composer and musician residing in England. The three releases in her Mouvement series, the last of which came out in May, reveal a trajectory that concludes on such a current note, it’s almost uncanny. PAN M 360 connected with David-Guillou to walk back through the timeline of this remarkable series of works.

PAN M 360: I discovered your work first through your recent Sans Mouvement, and worked backwards to 2017’s En Mouvement – reverse chronological order. In that spirit, I’ll start by asking you about the future before we walk back through the past. Does Sans Mouvement conclude the arc of the Mouvement works, or will there be further Mouvements in the future?

Angèle David-Guillou: My feeling, at the moment, is that Sans Mouvement will be the last of the Mouvement series. When I put out Mouvements Organiques, in 2018, as a response to En Mouvement, reworking some of the pieces of the original album for the pipe organ, I did have in mind a possible Mouvements Organiques Volume II. I got a lot of material from the recording sessions I did at the Union Chapel in London back in August 2017, and I do have more material, which arguably could make up a follow-up. Let’s see.

En Mouvement, to me, was very much about coming out of oneself and reaching out, I like the idea that if it is indeed a trilogy, it ends on being forced to retreat into oneself.  Also, I have a new full-length album which I have just completed, and should come out early next year at the latest, as well as an accompanying EP that is more conceptual, so there’s quite a lot on my plate already!

PAN M 360: Coming back to the present – my own interpretation of Sans Mouvement is that it’s a tiny, split-second moment of conflicting emotions, stretched out in slow-motion over close to an hour. That distortion of time seems very familiar in the current stay-at-home situation that most of the world is living with. How would you explain the piece?

ADG: Your interpretation is wonderful and I like that you mention conflicting emotions, certainly this is an aspect central to the piece. To me, Sans Mouvement is a wave, a sine wave, an ocean wave, a wave of sounds, of resonances, of contradictory emotions and motions. It’s also very extroverted and introverted at the same time. It is a sort of submerging that comes both from within and from without, both aspects either alternating or, yes indeed, being in direct conflict with each other. It felt incredibly apropos at this moment in time, when we have been feeling both very much cut out from the world, but also incredibly connected to it.

PAN M 360: The Mouvements works were begun years ago already, the first record was in 2017, long before the current pandemic – and yet their themes of time and movement are acutely pertinent right now. This brings in a consideration of timing, of random chance and the somehow preordained. What are your thoughts on that?

ADG: Mr. Jung would say that there is no such thing as coincidence. I wasn’t planning on releasing a new chapter to the Mouvement series now, but yes, the circumstances were just around us and when I suggested it to my record label, Village Green, they were just thrilled, which I am incredibly grateful for. It’s odd though because I haven’t been enjoying this lockdown at all. I have been feeling totally trapped, submitting to someone else’s rules in a way – I always long for stillness and solitude, but when they are chosen, not imposed.

Yet, indeed, there are definitely echoes of the current situation in my music and what I am interested in in compositional terms in particular. Certainly, central to my writing, perhaps less obviously in my less ambient output, but as fundamental to me, are the questions of change, repetition and stillness, which I try to explore in the stretching of sounds and textures, but also in experiments with time signatures, motifs, canons, etc.

PAN M 360: 2018’s Mouvements Organiques saw you migrate your compositions from ensemble performance to solo pipe organ – an instrument that has the strength and range to match a group of several musicians at once. At the same time, your compositions require a great deal of subtlety, and I’d guess that means tempering the force with which an organ can resound. What led you to that decision?

ADG: I was given the chance to perform on the organ of the Union Chapel in London, for a Daylight Music event organised by the London promoter Ben Eshmade, it must have been in 2015. He asked me whether I would like to play interludes on the organ, and I said yes, of course. One morning I was shown how to turn the instrument on and off and how to use the stops, and the next day I was playing it in front of an audience. It was a total discovery and I was amazed at how the instrument responded so well to some of my compositions.

It’s not just the instrument itself, it’s the room too. You are playing a room as well as keyboards. Perhaps this is why it is called an organ, it is as if you are inside a breathing organ that you are operating yourself. I loved that idea totally. It is very much a sensory experience, I love the physicality of playing the instrument. Especially if you play very repetitive pieces, it’s like being at the helm of a strange spaceship going through turbulence.

Perhaps you’ve played acoustic guitar before, resting your head on the instrument’s body? You can really feel the vibrations and resonances inside the guitar, not just the notes. It’s a similar feeling playing a pipe organ, but you are inside the actual sound. That’s really what drawn me to write Mouvements Organiques and later Sans Mouvement. I didn’t think of it so much as transposing pre-existing music, but as a physical experience.

PAN M 360: Now back to the first album, En Mouvement, out of which the later two records evolved. En Mouvement is more conventional, like an introductory portfolio. The presence of the ‘usual suspects’ is obvious – Philip Glass, of course, I hear Michael Nyman, and Steve Reich’s phase-shifting as well. But there are other sources of inspiration that are quite intriguing, like Gurdjieff and Cocteau, Sufi literature and Sumerian art. What insights can you share about that?

ADG: To me, these are all linked. They share an interest in illusion, in playfulness, while creating art that is profoundly serious. They also draw from the deeply personal, which is how they allow the reader, the viewer or the listener to look at the world and at oneself from an unexpected angle. Sufi parabolas are the most wonderful pieces of writing, they always seem so light at first sight, but they are so astute and shine a mirror directly at one’s soul – amazing.

Similarly, take Le Testament d’Orphée, possibly my favourite Cocteau film. There is an incredible joyfulness to it, humour even, yet it is extremely profound and never trivial, and the personal is expanded out into something unexpectedly universal. It’s not just in the writing or the story, it’s in the image of course.

Cocteau films are a huge influence on how I approach production, typically. Illusion in sound, not knowing what one hears, or being shown what we should be hearing but hearing something else, I am fascinated by all these processes, which in my mind are as much at the heart of Sufi writings as they are of Philip Glass compositions. I would need a full interview on Gurdjieff, but his writings have all these qualities and his music for the piano, deceptively simple, is just incredibly powerful and emotional.

PAN M 360: My final question: if you could write a letter today and mail it to yourself, five years ago, what advice, encouragement, or frantic warnings would you include?

ADG: I would tell myself to get on with it, and to stock up on French wine.