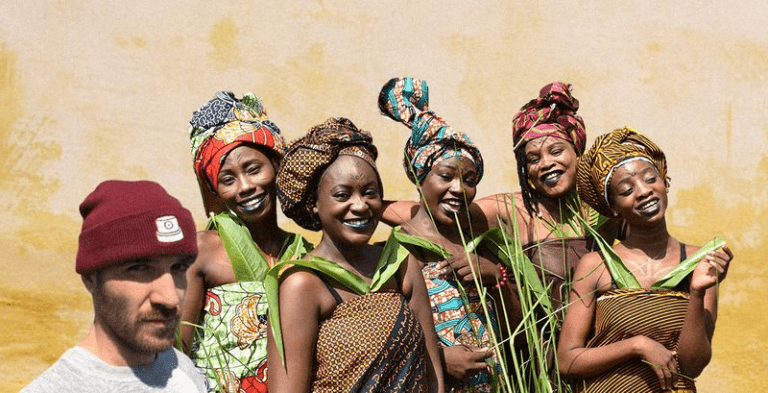 The emancipation of African women also passes through music. The aim of the meeting between Les Mamans du Congo and French producer RRobin is to highlight the daily life of these extraordinary women, whose place in society is still too marginal. Led by Gladys Samba, an emblematic figure of the Congo, the Mamans collective tells the story of its people over complex rhythms played with forks, baskets, plates, and recycled materials. A colourful and original project for RRobin, a great fan of the sounds and noises that surround us since his early childhood. The producer and beatmaker looks back on this musical journey that led him to Brazzaville and the meeting with the collective Les Mamans du Congo.

PAN M 360: When and how was the project born? How did the connection with Les Mamans du Congo happen?

RRobin: At the beginning of the project, it was an initiative of the Coopérative de Mai (a theater in Clermont-Ferrand), the French institute in Brazzaville, and the Jarring Effects label that put me in contact with les Mamans du Congo. It all started a year ago, when Céline Frezza (co-director of the label and sound engineer) and I met Gladys Samba at the music studio in Brazzaville. Gladys is the leader of the band and has some fame in Congo. We had ten days to make this album and everything came naturally. The deadline was short and I had to work in a rush. Having said that, I’m more productive that way, and it allows me to work on instinct too. It was a blessing in disguise. Everything was designed on the spot. I came with my computer, my synthesizer, and everything was thought out and recorded in the studio.

PAN M 360: Who are Les Mamans du Congo, and what place do they occupy, both on the music scene and in society?

RRobin: Les Mamans du Congo is a collective of Congolese women led by the charismatic singer and percussionist, Gladys Samba. It’s not always the same people who are part of the group. They often accompany Gladys and add the backing vocals on the album. The place of women in the music industry, as in society, is quite particular in Congo. There, often, the husband gives them an ultimatum: either you sing or you stay at home. In this context, that’s why Les Mamans du Congo are not always the same. These women and mothers bring a real authenticity to the lyrics, both in the voices and in the texts they sing in Lari, their local dialect.

PAN M 360: On that subject, what were the themes addressed by Les Mamans du Congo in their texts?

RRobin: Well, that’s funny, because I never really knew the meaning of lyrics texts until Gladys Samba and her husband came to visit me in France. The trip to Brazzaville was quick, ten days, and we didn’t have enough time to exchange. However, in France we talked for a long time and I finally learned what it meant. Gladys and les mamans mainly talk about the role of women and their emancipation in a society that is still very patriarchal. They also highlight the ancestral songs and lullabies from their childhood that they want to pass on to the new generations. An important cultural heritage which they hold dear, especially the history of their people and their daily lives. They are free women, who push others to emancipate themselves and have very strong commitments that push them to fight for the recognition of the status of women. They are involved in society and say they are proud to be feminists.

PAN M 360: Moreover, what place does music occupy in Congolese society, and more specifically in Brazzaville, where you recorded the album?

RRobin: In the streets of Brazzaville, music is omnipresent. In Congo, everything is music. Music is part of daily life. What’s mainly played is rap and electronic. There’s a big French influence that’s inevitable and I’ve heard a lot of music by the French rapper Niska. Electronic music is also booming because of the notoriety of some artists like Spoek Mathambo, a big figure from South Africa, who also raps and produces. I had worked with him on my previous album Déluge, on the track “Contact”. On this new album with Les Mamans du Congo, I also worked with the great Armel Malonga (husband of Gladys), bassist of the legendary Congolese singer ZAO, who served as artistic director of the project. A whole collective that has been making Congolese music shine internationally for several years.

PAN M 360: What are the differences between a production with Les Mamans du Congo and a production for Déluge or the instrumental album IN, which were released in 2018 and 2020, respectively – and how did you compose with them?

RRobin: There are almost none. I don’t create sounds based on a musical style, let alone the artists I’m going to collaborate with. In fact, the voices of the artists resonate in my head, for example the rapper Grems, who’s present on many of my projects, and notably at my side in The Imposture, is one of them. I have a special relationship with him, because his voice is everything that makes me trip, and it resonates in my head.

Every sound I produce, I can already see which voice I would see landing on it. With Les Mamans du Congo, it was completely different. Most of the sounds on the album were recorded as a result of improvisation. Sometimes Les Mamans and Gladys would go into deliriums and extreme musical trances, and the alchemy would work, that’s what was fantastic and what made the charm and authenticity of the sounds. On top of that, African music goes hand in hand with dance. It was quite a show in the studio!

PAN M 360: On some songs, like “Sans Pagne” and “Meki”, Gladys Samba raps with a sustained rhythm. Did she take the initiative to sing like that, because it’s not quite in her register, compared to a song like “Ngaminke”?

RRobin: It’s completely her style, in fact (laughs)! That was even noticed by Céline. But her flow is completely natural. If you listen to her solo album Absence, from 2018, it’s pretty obvious in the way she enunciates words. But the beauty of this artist’s voice lies in the fact that she manages to rap on a track like “Sans Pagne” as much as she manages to bring a lot of sweetness to a lullaby on the track “Mwana Wu Dila”. When she sings, she puts all her soul, her heart, her guts into it, and you feel it every time. For all that, there was no personal initiative, it came quite naturally and by improvisation, according to the rhythm used on each of the songs.

PAN M 360: What is your relationship with music, what does it mean to you?

RRobin: Music for me is a means of expression without rules or constraints. A total creative freedom in which I discovered the pleasure of simple emotion. At the age of five, my parents gave me the gift of enrolment at the conservatory. In musical practice, there were a lot of constraints and a lot of rules for little pleasure. It was after school that I started my own band with friends, but there again I was frustrated to perform and not create. It was at university, with a computer music option, that I had this revelation. There I had a creative tool with infinite possibilities open to me. By dint of fooling and fiddling with sounds on my computer, I ended up collaborating with artists from the rap and electronic scene, until last year and the project with Les Mamans du Congo.

PAN M 360: Noises and sounds are familiar to you, since they are the basis of all your musical creations. How did you go about creating the sounds for this album?

RRobin: Yes, since I was very young I’ve been attracted by the sounds and noises that surround us. In the car, I was already fascinated and hypnotized by the noise of the windshield wipers and turn signals. I quickly began to create my own sounds, to fiddle and tinker with everything that passed through my hands. I have a 15-year-old laptop, but with precious music-composition software on which I’ve been working for many years, and with which I create all my presets. It’s a gift from my girlfriend, which I never let go of. I create all my sounds and samples on it, in addition to a very basic synthesizer. I also use samples that I find, but like any good beatmaker, I crush them as much as I can to avoid being recognized. No question that this project was a joy for me to record. I was in my element, mixing all these sounds of plates, forks, buckets, recycled materials. It was an extraordinary experience.

PAN M 360: How do you see the live version of this album, and was a tour planned?

RRobin: Yes indeed, a tour with Les Mamans was planned throughout the summer, here in Congo, but also in Europe. African music goes hand in hand with dance. It’s in their culture, in their genes, in their blood. So, on stage Les Mamans would have danced and sung without any doubt, I would have been on the decks with my synthesizer to play live at times, and a percussionist also, to add life. Unfortunately, as you can imagine, it was cancelled, to our great sadness, but it is only temporarily postponed, we hope.

PAN M 360: This forced period of quarantine is conducive to the production of content, how do you see the next steps in your career?

RRobin: I’m keeping my feet firmly on the ground and I’ve resumed my work as a special educator for disabled children. I don’t consider my passion as a beatmaker a profession. I want to remain myself, faithful to my convictions and free to do what I like. Having a full-time career as a producer would potentially mean accepting everything and its opposite and that’s not my vision of things. I want to do what I want to do, and when I want to do it. Collaborate with who I want ,and be artistically free. However, I always continue to create, at my own pace and according to the human encounters I make in life. I always tinker with my sounds and send them to the artists and friends to whom they might correspond. Sharing is the best thing there is.