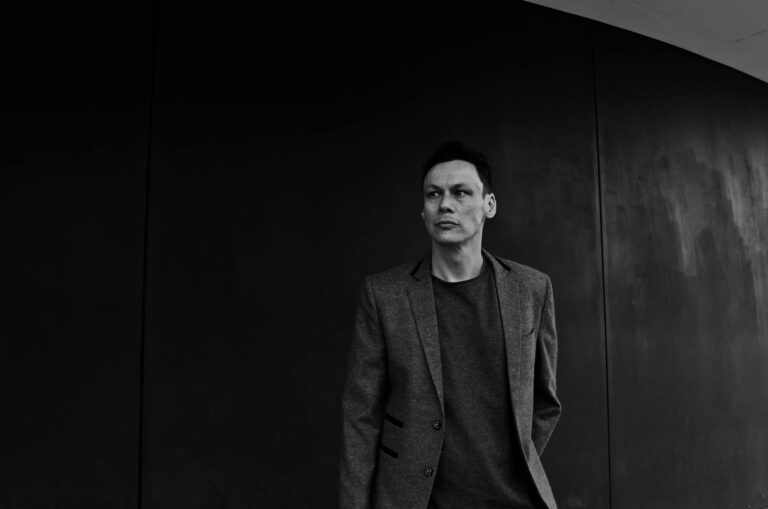 After more than 30 years of a prolific career, Luke Slater belongs in the heavyweight category of techno. Pioneer of the genre in Great Britain, he has developed many aliases over the years, allowing him to explore the corners of his creativity. MUTEK invited him as LB Dub Corp (yesterday, August 25) at the Esplanade Tranquille and he will play live tonight at the SAT under his best known alias, Planetary Assault Systems. Expect a masterclass of dark, cold, and atmospheric techno.

PAN M 360 : Do you remember the first time you came to Montreal?

LUKE SLATER: You know I do, and I’ll tell you why. As crazy as this is, yesterday morning I was up at like 6:00 o’clock in the morning because of jetlag, so I went for a walk. And I went over to la Place-des-Arts and on my way I spotted this place called Eggspectations… I think it was like 1995, I did a gig here and then after the gig it was like 6 or 7 in the morning they took me to Eggspectation and I was never really sure whether it was in Montreal or Toronto or somewhere else. I was just standing there, “it’s here ! Eggspectation is still here, I’m still here.” I didn’t go and eat any eggs, but I was pleased to see it was still here.

PAN M 360 : So you’ve been familiar with the city for quite a long time now. Is there anything special about it for you ?

LUKE SLATER: I think it’s quite unique from what I’ve experienced because of the French culture. This sort of mix where culturally I’ve always thought it’s really interesting, like I’ve never really managed to put my finger on it. For me, it’s never been like a straight sort of place to play, where you go and play and you know the crowd like “this is a rave crowd”, etc. Every time I come here it’s like “OK, what’s it going to be this time,” and it’s a good thing.

LUKE SLATER: In some way, yeah, you got to keep an open mind. MUTEK is a very good example of that. The festival itself has always, from what I’ve seen, been curating really culturally interesting music and that’s inspiring, to the point that, all over the world, people know the festival.

PAN M 360 : During MUTEK you are playing with two different monikers and you have quite a few others, it seems a lot !

LUKE SLATER: Yeah, I’m trying to strip them away slowly, it’s just a lot to manage. Last night I did an LB Dub Corp, more of a house set and tonight the live show with Planetary Assault Systems and I can switch between those two really easily. The 7th Plain, that gets a bit more complicated, it’s a different kind of mindset. I think the idea started because I was writing so much music and I needed to separate out everything. After a time, what happened was I started releasing on different labels, and then assigned each pseudonym to a label, and then it started to happen that these labels wanted more. So, I had to kind of think of writing in a way that was true to each one, which worked for a while, but ultimately ended not in disaster, but ended in just being ridiculous, trying to satisfy everyone.

PAN M 360: You are playing in two very different contexts during MUTEK : outdoor at Place-des-arts from 9-11pm and at MTELUS on Friday night. How each context is calling for one or the other moniker?

LUKE SLATER : With LB Dub Corp I don’t do that many DJ sets. It’s kind of like just the happy living with a side project really. I do look at where they want me to do it, because people don’t really know me that well as LB Dub Corp and some years ago there was a couple of instances where I did LB Dub Corp sets around techno warehouse events, the people were really confused why I was playing house. So I thought, LB Dub Corp got to be somewhere outdoor and mellow or a really small club, you know, very personal, dark, and that for me, that’s the two areas where LB Dub Corp work. I don’t like weaving out LB Dub Corp just like that because it’s got to be the right place. I’ve done a few nice sets in the Panorama Bar. But I think Planetary Assault Systems kind of just works. I mean, I’ve done sets in the day, during festivals… To be honest, it’s a nighttime thing for me. If it’s a very festive warm, I always want to block out the light. I like the dark better.

PAN M 360: As you may know, MUTEK is about electronic music but also digital arts in a wider sense. Have you experimented with any other digital arts besides music?

LUKE SLATER: I get acutely aware when I’m doing something that takes me away from music. I’m very sensitive to it and when I find myself looking at different paths I find it very difficult to kind of accept that at some point music has to be left behind for something. A lot of times when I explore different things I always come back to the music. I go out the door, have a look around and that’s it. It’s not just the throwaway thing, it’s a part of me and to sort of get excited in the same way by another process is really difficult even though. I’m very curious about AI lately, it’s threatening and that’s why I’m curious. I might feed all my tracks to see what it will spit out, is it going to be good? I don’t know.

PAN M 360 : Have you ever mobilized music as part of a bigger project including other art forms ?

LUKE SLATER: When everything was locked down last year, but some places were open, I did a few special dates in Holland under the name the 7th Plain, which is more of my ambient, more spiritual side. It was really cool trying out this idea of getting some modern dancers involved, originally from the Staatsballet in Berlin and whom I’ve worked with before. I was playing live and I wanted them to express what they do in front of me on the stage. And it’s just amazing, really, you know, and we did one show at the Muziekgebouw, which is a classical concert hall in Amsterdam so totally different thing. I like to push the boundaries, break the codes of what you should and shouldn’t do.

PAN M 360 : You are talking about the lockdown which makes me think about how the pandemic underlined the fragility of the structural techno music economy. I know there are initiatives like Aslice from DVS1 trying to make it more livable for producers. Have you any thoughts on how artists can build a more sustainable community ?

LUKE SLATER: I think the nature of the music business is just tough. It is not just about talent, it’s about getting involved. For my experience, being present around everything probably was more important than just the fact I write records. If you got talent and you’re making music, that’s something that can’t be touched. But there’s more than that. It’s never just been about the music business and never just been about music. If you’re just sitting in your bedroom making some tracks, you need to reach out. I was around clubs a lot, right from the very beginning I was so involved, I mean my life became the clubs, I was fully immersed in this world. That was a good escapism and I felt at home.

PAN M 360 : It’s probably easier now to make music and it’s easier to go online and put some stuff online thanks to the democratization of the tools, but it doesn’t mean it’s easier to reach to audiences and differentiate, there is so many competition

LUKE SLATER: It really is, that’s a real thing, not just a perception of old versus new. In the early days I think there probably were just as many musicians, but not that many people could actually release something. So people would have been creating stuff, but the bit where you can get it put on a record and then mail that record to someone, a DJ, and then that DJ would play the record; it was a very expensive and special route. And that’s the route I was involved in. So if you could get there, if you had a record coming out on the label, back then that was a big deal. And now it’s not, I mean there’s more kudos involved with labels. So people want to put stuff out in Mote-Evolver, but what Mote-Evolver does as a record label is absolutely no different from other labels. We go through the same process of releasing a raffle, the difference is that I run the label and I pick the music that goes out. Maybe there’s a shift in words like ‘release’ and uh, a lot of the old terminology of music I think sometimes can be dropped now because the chain is not the same. We don’t live in the past, you know? It’s not the 1980s anymore. Just use new words to describe what’s going on, slowly that’s happening.

PAN M 360 : Retrospectively, after so many years listening to music, creating music, would you say having such a long career, is more a blessing or a curse ?

LUKE SLATER: I think the first thing you have to do is accept that you’ve had a long career. There’s a point where your career is branded as a long old parade and you have to take that on. People are going to say you’ve had a long career and they’re going to look back at the history. Actually, I think this is an amazing thing, because if people are interested in my history and what I’ve done and why was one part of and everything that revolved around the culture, this means there’s a huge interest in the music and how it’s formed, where it’s going, what was going on there, what is going on now. You got to turn that into a positive, bring your history with you but you don’t live in the history. You can’t pretend that it didn’t happen and people will always ask you about this, you gotta own that. You gotta own that big time and. I think you can keep on pushing things and keep on testing different areas yourself. I think there’s an old saying that like if I went to see a band like let’s say the Clash was still playing, another band from my youth, and Strummer was still alive, If I went to see them play now and they didn’t do “London Calling”, I’d feel really pissed off about it. And to them, it’s probably the one track they don’t want to play. I think this is interesting, where Rock n’ Roll and dance music, some of the kind of lessons and ethos from bands, sometimes can crossover to electronic music because if you’ve written a lot of records and some people know of those records, I think you kind of owe them to do at least a couple when you’re going to play, you know? So I think the history things seems to inspire other people. People come up to me, brimming with enthusiasm, I’ve heard their perception of what happened, everything that came out and that’s a good thing.