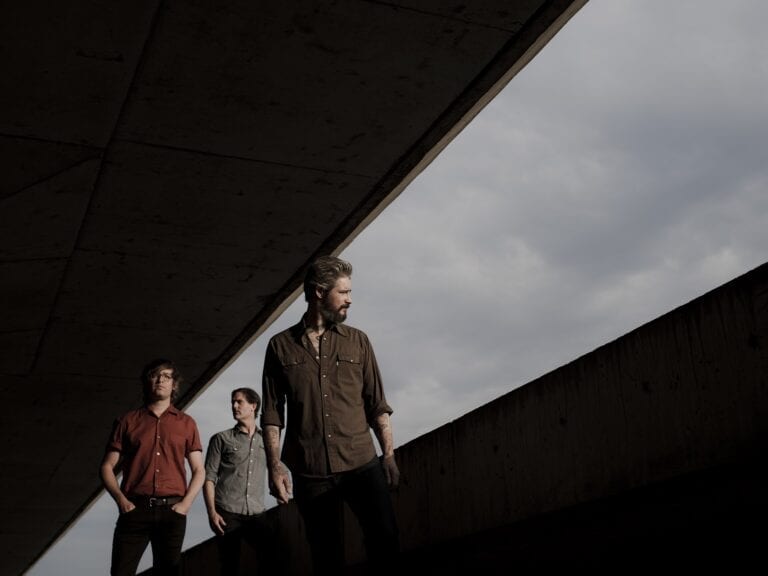 METZ, or the noise of change

With this fourth studio album, the Toronto trio claims to be at another stage of its existence. METZ are as brutal, twisted, and uncomfortable as ever, but with Atlas Vending, the band push their music towards new dynamics, exploring the theme of growth and maturation with martial rhythms and twisted riffs. In all this fury and sonic maelstrom, there are a few hidden hooks, a sign that the combo, if not softening, is slightly less oppressive and anxiety-provoking. The band’s bassist, Chris Slorach, tells us more about this new charge and what this new maturity means for the band.

PAN M 360: The photo on the cover of your fourth album is fascinating, it’s a strong image. What is its story and what does the title, Atlas Vending, mean?

Chris Slorach: It’s really hard to say because it’s got a lot of personal meaning woven into it. But I think a lot of it has to do with us growing and changing. Just evolving, you know. It might not make sense as a literal term, but internally, it has a lot of significance to our band. It’s difficult to explain. As for the photo, Alex Edkin’s  (guitarist and singer) father is a hobby photographer and this particular photo has been sitting for about three years, just waiting for a home. We thought of using it for a seven-inch but then we changed our minds. So for the artwork for this record, we went through five or six cover designs, but kind of fell back on that one and, as we continued to look at it and continued to lay it out, it started to reveal itself as the obvious choice for the cover of that record. I think it’s a really powerful photo, the image matches the music. It just felt right.

PAN M 360: You spoke of growth and evolution, can you be more specific?

CS: Influences and lifestyles, just who we are as people – we’ve all grown and changed quite a lot over the years. Our influences are constantly in flux, we’re all big music fans and record collectors. Where we’re pulling our musical influences from are very different than what they were ten years ago. But those changes are also on a personal level. Alex and I are both married and are parents now. I’m in my early forties, I’m no longer a young man. The things that are important to me on a daily basis are very different than what they used to be. So I think you can’t have all these changes happen in your life without it affecting what you do, right? So the way that we approach music has changed, just like our life on a daily basis.

PAN M 360: As far as these different influences are concerned, can you name some of them?

CS: I get a lot of influences and inspiration from my wife and my kids. I find it’s a driving force for me, and always a source of inspiration to work hard. Musically, I’ve been listening a lot to Charlie Megira. A bit of a chameleon, as far as his music goes. Some stuff sounds like The Cramps meet Santo & Johnny, and some of it can sound like Joy Division. It’s really all over the place. And I have a deep history in metal, I traveled to Montreal many times to see metal shows. This year I’ve been revisiting a lot of old metal, but there’s a band from Finland called Oranssi Pazuzu who put out an amazing record this year. And then revisiting old music like The Kinks. I was reading about volatile bands, and the story of the brothers in The Kinks is fascinating.

PAN M 360: Can you tell me how and when the album was recorded?

CS: We recorded it at the end of November, early December, 2019. In Providence, Rhode Island, with Seth Manchester (Daughters, Lingua Ignota, The Body) and our friend Ben Greenberg (Uniform). We’d been writing for about a year and a half before going into the studio. We put out Strange Piece, toured it quite a lot, and had taken a couple of months off to recuperate. I took off to play bass with a band called Daughters and when I came back, we just got into it, wrote this record, and drove down to Providence and made it. It was one of the most fluid and comfortable records to make. We were very prepared. We recorded and mixed the record in 14 days.

PAN M 360: Covering seemingly disparate themes such as fatherhood, overwhelming social anxiety, addiction, isolation, media-induced paranoia, and the urge to give up, each of Atlas Vending’s 10 songs offers a kind of snapshot of the current situation. If you hadn’t told me when the record was recorded, I would have thought it was something you would have done during the pandemic. It’s the perfect soundtrack. That said, all your albums could be the perfect soundtrack for a pandemic!

CS: I feel that we operate with enough anxiety to survive an entire pandemic (laughs). There are four albums of pure anxiety, if you want it! The one we’ll write during the pandemic will be just acoustic banjo, to truly take us out of our element (laughs).

PAN M 360 : So you choose to work with a producer on this album. You didn’t want to work with Steve Albini, like you did on your last record? Is he too expensive?

CS: We’ve never worked with a producer before this new album. Albini was the engineer on our previous record. He is a very competent person who knows the ins and outs of a studio like nobody else, so it’s a great situation to walk into. But I created a relationship with Seth, and we’ve been talking in the band for so long about making a record, so when we were trying to figure out where we were gonna make the record, everything fell into place and it just made sense to go work with these guys. We wanted a very comfortable situation with some familiar faces so that we could feel at home and try to have fun making that record, and not feel like we’re working. I’m not saying working with Albini is not fun. He is, he’s a really nice guy, he’s incredibly talented, but the situation that we wanted to get into was something more friendly. And working with Seth and Ben helped us feel in our element. So it’s the first album we did with a producer, we always self-produced.

PAN M 360: Would you say this album might be more melodic than the others?

CS: Yes, I think so. There’s no way I would deny it with songs like “Hail Taxi” or “A Boat to Drown In”, there’s clear melodies. I think that we’ve always focused on finding a hook in a lot of our music. We’re all big fans of rock ’n’ roll song structures. This album is a growth in songwriting but also, there’s a confidence that comes with this much experience playing, so we felt more confident making that record, confident making a more melodic record.

PAN M 360: Can you explain the evolution of the band since its beginning?

CS: When we first started we were probably a mathier band with longer songs. Our first seven-inches were fairly long and drawn out, a lot slower, and with time, we’ve turned into a very straightforward rock ’n’ roll band. On the outside, a casual listener might not feel the same sort of growth, maturity, and forward movement that we feel within the band. We feel that with every record we’ve made, we’ve taken a step and evolved. Like Alex said, “change is inevitable if you’re lucky.” So that’s what we’re trying to do, we’re trying to get better at writing songs, and become better at our instruments and feel free to move around the space that we’re creating. To grow personally and as musicians with every single release.