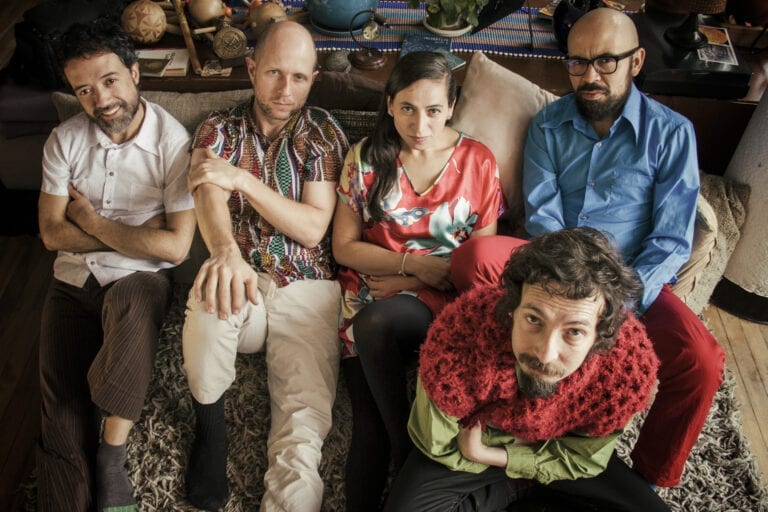 Meridian Brothers, or cumbia upside down

Meridian Brothers, led by the gently crazy Eblis Álvarez, returns with an even bolder and more modern cumbia album, perpetuating the genre and propelling it in a very personal way into the 21st century.

Meridian Brothers is the project that Colombian multi-instrumentalist Eblis Álvarez started in 1998, and which serves as a kind of musical laboratory to explore all kinds of Colombian and Latin American sounds, with a special affection for cumbia and salsa. Álvarez, who composes lyrics and music and generally records all the instruments found on the Meridian Brothers’ albums, is however accompanied on stage by other musicians. Like the eight previous albums, the latest from Meridian Brothers distills an experimental cumbia spiced up with tropicalism, salsa, chicha, and vallenato, forming a playful, avant-garde and often completely wacky mix to which are added elements of rock, pop, new wave, and electro.

For Cumbia Siglo XXI, Meridian Brothers’ ninth album, Álvarez has taken a more electronic turn. After the resolutely acoustic ¿Dónde estás María? released in 2017, the mad scientist of cumbia, who’s active in Ondatrópica, Frente Cumbiero, and Los Pirañas, among others, has tried a new experiement, taking Fernando Rosales and Ramiro Beltran’s group Cumbia Siglo XX, well known in the 1980s for its futuristic vision of cumbia, as a reference, along with other groups such as Grupo Folclórico and 2000 Voltios, for example. Taking the work of Rosales and Beltran as a source of inspiration, Álvarez has somehow adapted it to the 21st century, its instruments and tools. Thus, several drum machines, guitars, synths and software were used in the creation of this new album by Meridian Brothers, on which are found various urban beats, synth grooves, and glitches mixed with all sorts of swear words and Colombian slang.

Stuck at home in his neighbourhood in Bogotá due to severe confinement, the versatile Eblis Alvarez was kind enough to deconstruct all this and explain his singular approach to us.

PAN M 360: Eblis, can you elaborate on the link between this new Meridian Brothers album and the group Cumbia Siglo XX?

Eblis Álvarez: When I started thinking about the style I wanted to give to this new album, I thought about this funky approach to tambor music that was mostly found in the area of Baranquilla, and on the Felito and Machuca labels, between the late ’70s and the mid-’80s. It was a trend where they mixed more traditional music such as bujerengue, puya, cumbia, fandango, and drums associated with traditional music, with funky bass and disco grooves. So I wanted to try that same kind of approach, but in the 21st century. So I simply called this record Cumbia Siglo XXI. But it’s not a 21st century cumbia record as we know it today, it’s a mix of different things.

PAN M 360: What’s the difference between this new album and the previous ¿Dónde estás María?

EA: Well, ¿Dónde estás María?, I would call that global song. Let me explain – it’s not a term you find in music books, it’s just a term I made up. For me, the best representation of global song would be the Beatles, a British band that has become known all over the world. So this rock, pop, folk sound with strings, brass and all kinds of other instruments, you can find it in Asia, in Brazil, in Colombia, with some traditional or typical elements from these different parts of the world, but with the same kind of style and structure as a Beatles song, for example. So I followed this approach and I applied it to the cumbia, but in a more acoustic way with a lot of strings, especially the cello, since I’ve been playing it for 20 years. So that’s what I’ve been working on for ¿Dónde estás María? As far as Cumbia Siglo XXI is concerned, I’ve been more into the spheres of the modern cumbia that you hear everywhere, made with synths and computers and mixed with electronic music. So by staying in the spheres of modern cumbia, the way it’s approached today, I tried to do something creative by crossing with this more typical cumbia approach, like bands like Cumbia Siglo XX were doing.

PAN M 360: I’m not an expert on Colombian vernacular, but I hear you using a lot of swear words and slang on Cumbia Siglo XXI.

EA: It’s another ingredient I wanted to add to the mixture, something censored. Because all the swear words are censored by myself on the record. You can guess them, but I replaced them with beeps or blips that blend well with the music. You can hear that on eight of the ten songs on the album. That’s another one of the rules I set myself for the album.

PAN M 360 : There are several styles of cumbia, which do you prefer?

EA: There are three main branches of cumbia. First, international cumbia, which has spread to Mexico, Argentina, and Peru. Each of these countries has developed its own cumbia, depending on the different influences that have been integrated into it. Then there is the global cumbia, which is more modern, very electronic, and is found mainly in these same countries, but also in Ecuador and of course in Colombia. It’s from these two lines of cumbia that Meridian Brothers originates and feeds off. Then there’s a third branch, that of traditional Colombian cumbia which has spread its roots to different styles of music. That’s something I’d like to do, in other words, dive seriously into all these different forms of Colombian cumbia. So cumbia is a lot more complex than we think, it has ramifications everywhere, different sources and is very often mixed with other styles of music. And although it is said to have originated in Colombia, it’s mostly the ones from Argentina and Mexico that most people are familiar with.

PAN M 360: What are you trying to accomplish in the long term with the Meridian Brothers project?

EA: I’m not necessarily trying to accomplish anything with this project, I see it more as my playground. It’s my way of occupying my time while I’m waiting to die (laughs). I mean, I’ve got to do something to pass the time, and Meridian Brothers is one of those activities. It’s a very personal thing that’s become a little less personal. But I don’t have any other intentions. I don’t have any political intentions or the goal of achieving public recognition, it’s just a consequence of the times we live in, I don’t see what else I could do. But basically, it was a project for me and my friends.

PAN M 360: You’re involved in various projects outside the Meridian Brothers, do you have anything going on right now?

EA : I’m actually always doing a couple of things at the same time. I’m working with Grupo Renacimiento, with whom I’m trying to reproduce, as faithfully as possible, the Colombian salsa of the ’70s [which the writer of this article invites you to discover, if you haven’t already done so]; I’m also doing a neo-perreo album with the Meridian Brothers right now, which is a kind of post-reggaeton; I’m mixing a new album with Los Pirañas in which there will be horns, and I’m thinking of continuing the Los Suicidas trilogy that I started with Meridian Brothers in 2015, so making a new album that would be like elevator music with a lot of organ… So yes, I have a lot of work going on right now!