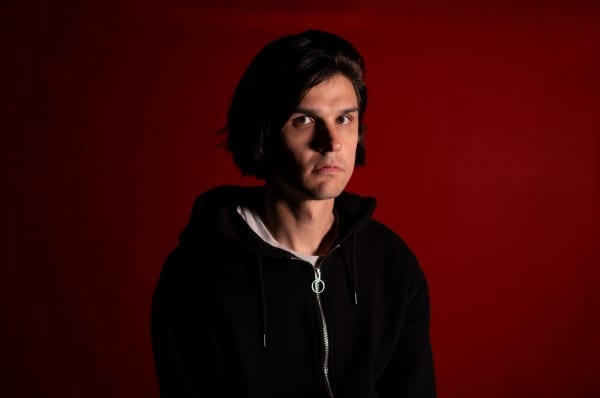 Jo Passed is not just passing through

Invited to M for Montreal, Jo Passed is Jo Hirayabashi’s gleaming avant-rock vehicle, certainly one of the most interesting bands in British Columbia.

On PAN M 360’s radar, Jo Passed is one of the most exciting pop-rock projects on the Canadian West Coast. The bio from Sub Pop, the Seattle label the band is signed to, lines up names to describe the approach of writer, composer, performer, and producer Jo Hirayabashi, without whom this band could not exist: XTC (Andy Partridge) + deconstructed Beatles + krautrock (Can and Neu!) + a bit of prog + American avant-rock + a bit of Sonic Youth somewhere + Nick Drake meeting Swans + Grouper with Frank Ocean. Let’s add to all this a funny name, inspired by the legendary jazz guitarist Joe Pass. M for Montreal spotlights this top-notch act, and PAN M 360 spoke with him.

PAN M 360: What do you think of this list of references laid out by Sub Pop?

Jo Hirabayashi: That’s from the Sub Pop bio, I think we were trying to strategically write artists for reference to end up in interview questions and reviews. You know, everyone is so stressed working to deadline so often that releasing a bio, basically stating the things you want to be compared to or sound like, will generally equal that kind of press for people who are asked to cover it, and need quick-written things to sell the band or project or whatever. I think that was the rationale, leaving the name-dropping references in there. The publicist working on the record liked the comparisons. Also, that’s super awesome that you saw Joe Pass in concert, it must have been incredible. What an amazing musician and guitarist. I took his name to hide my Japanese real name, so that I wouldn’t get asked questions about how being part Japanese has influenced my music.

PAN M 360: How did you evolve as a music fan? How did you acquire this rich musical culture?

JH: I used to make myself listen to a new album every day. Now I can’t even get through a three-minute song, it takes a lot. It’s just really overwhelming generally, there’s so much to take in and it gets me thinking about the whole context of the artist and the intent and all that jazz. The culture of music scares me. I’m hoping to get rid of the culture and keep the rest. I think it gets in the way of whether I can actually experience just the pure sonic joy of music most of the time.

PAN M 360:  As a musician, what schooling did you have, how did you learn?

JH: I started taiko drums at four, and then piano at five, and then guitar at 16, 17. I went to jazz school to get more skills to write songs and make records but then got sidetracked, thinking I could maybe score the hottest restaurant gig in town. Did a few records with other groups, and then started Jo Passed 平林 as my final project before I give up.

PAN M 360: Your harmonic choices, your rhythmic patterns, and the quality of your performances suggest that you’ve explored a lot of music and sound design.

JH: I think I’ve spent a lot of time listening to my anxiety when I’m writing, which is why everyone sounds so tense and why none of my projects are very popular. Songwriting is a release for me and most of the time I’m high-energy and anxious. I think my favourite songs I’ve written are when I’m tired, but they are few.

PAN M 360: You reached a peak with the album Their Prime, released in 2018. What happened afterwards?

JH: I’ve been depressed since the record was released. I think it was a step off a bridge. Lots of weird social stuff going into the record and coming out, and the whole time I was trying to finish a second record purely based around a song that my guitar player, who later quit, really liked and was really pushing for us to play. It’s a song that preceded the project and I thought was kind of simple and silly, but she was so nice and supportive of it that it inspired writing an EP around it to make it work. The EP was pitched as a warm-up to the album with Sub Pop, but eventually everyone thought it’d be better to just lead with the album and leave those songs until another time. Eventually I wrote a fifth song for EP which turned it into a side A. Side B came out very very slowly. The whole process has been a slog and I still need to write one more song, and I’m left with this bunch of songs that just carry such weird baggage with them.

PAN M 360: Mac Lawry, Bella Bébé, and Megan Magdalena-Bourne were your partners in Jo Passed, how did they evolve within the group?

JH: Bella and Megan don’t play with me anymore. Mac plays with me and Téa Mei has joined me on bass. My old childhood friend Elliot Langford is joining on guitar and ebow for this session at M for Montreal, opening for Mac Demarco. Mac (not Demarco, my drummer) has evolved from playing drums really loud to playing them, like, really, really loud, and very tight, with good ideas, and he’s a good friend. Téa has just started playing in bands and music and is a sobering presence who doesn’t care about the career ambitions of rockers very much, and thinks music scenes are BS and the whole thing is a bit silly, she’s really rad and she’s my partner and I love her so much. Even if me and Elliot are super-fighty and not speaking, being weird, I could still ask him to help me by playing in my band and he would because he’s such a sweet and caring guy. Or I could ask him to pick me up after I got hit by car on my bike and he would too, like, not ’cause my band is cool to play in, just like, he’d help out, y’know?

PAN M 360 :  How do you see the next steps in your creation? Electronics? Effect pedals? New dimensions?

JH: I’m trying to get rid of pedals. I did get some synths. I might write more simply and just record albums and share them with my friends and not really promote them or anything.

PAN M 360: You lived in Montreal a few years ago and then returned to British Columbia, why the migration?

JH: I wish I hadn’t left or had to leave Montreal in some ways. Sub Pop definitely made it feel okay to leave for a bit and I suppose I could always just go back to Montreal. But I don’t know if that will happen. Largely it was personal and family that brought me back after spending just a measly six months in Montreal, where this project started.

PAN M 360: You would seem to have a love/hate relationship with Vancouver, what would you say is your “West Coast identity”?

JH: I’m West Coast through and through, and can’t deny it. Even when I was in Montreal, people just thought of me as a West Coast guy. Honestly, I’ve really enjoyed Vancouver for the first time since ever during lockdown. It made me grateful for the place I get to live in with such a wealth of indigenous history, which I’m starting to explore, as well as the beautiful forests and mountains.

PAN M 360: How would you describe the subjects of your lyrics?

PAN M 360: Are you looking for a balance between lyrics and music?

JH: I think the lyrics are more important, but no one can understand what I’m saying on this record. But people should buy it at subpop.com.