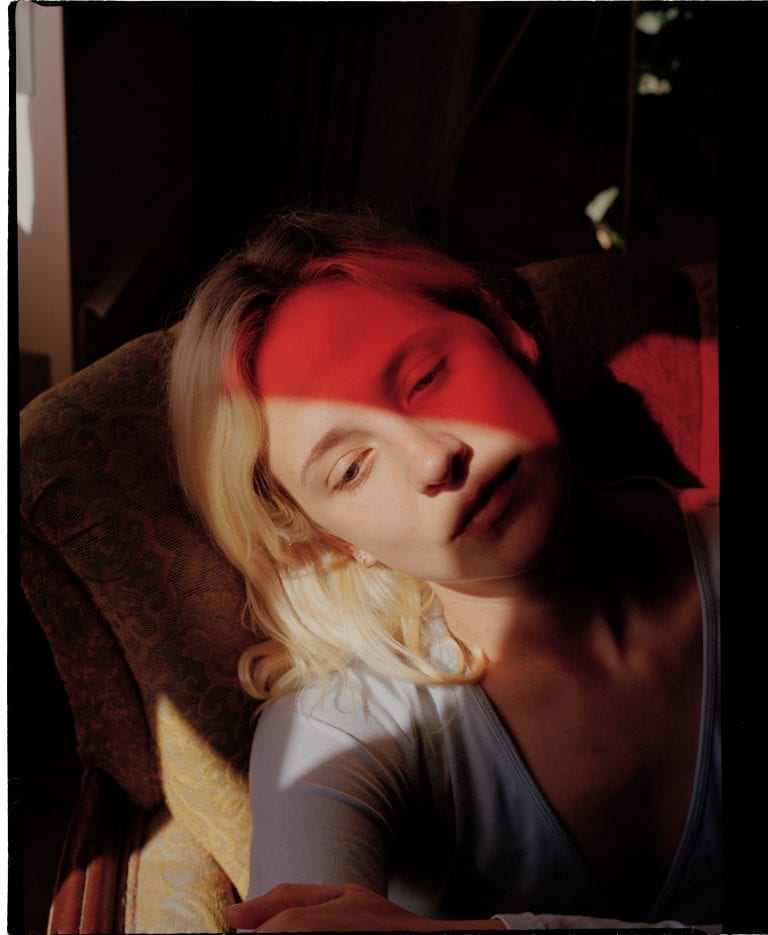 Helena Deland: End-of-twenties vertigo and then… the world!

Helena Deland is taking off into the indiesphere quickly and convincingly. After EPs and world tours, here’s her album Someone New… and what she says about it.

In contrast with the absolute majority of French-speaking Quebec singers who’ve chosen to express themselves in English and who, it has to be said, are only listened to appreciably by French-speaking Quebecers, Helena Deland manages to thwart that insular model. A songwriter and performer with bicultural origins, she can boast a real career in English-speaking markets outside Quebec. Deland has toured with Whitney, Weyes Blood, Connan Mockasin, opened for Iggy Pop in Paris, and collaborated with JPEGMAFIA. Not bad! The next step is the imminent release of the album Someone New, on the Chivi Chivi label.

PAN M 360: Someone New shows a remarkable progression in your young career – could you identify the main factors?

Helena Deland: The clearest way to describe this progression is this – for my EPs released since 2017, there were no umbrella themes, that is, I didn’t approach songwriting as a fragment of something bigger. I would get to the recording stage, then I would make a summary of the songs on the programme. I wasn’t looking for a clear theme, but rather for coherence. From the moment I wrote “Someone New”, I became super excited! It kept me awake, the inspiration was stronger than sleep. It doesn’t often happen to me that a song comes to me so quickly. I felt like I’d put my finger on a proposal to develop. It was the spark plug, I really wanted to carry this project forward. “Someone New” gave me a model. I wanted to exploit a clear idea and use it formally in poetic writing.

PAN M 360: The more or less recurring theme of Someone New is the state of mind in which a woman in her late twenties finds herself, torn between the dominant models of emotional success and the assumption of a less stable emotional life than she had expected or desired. What’s your perspective?

HD: It’s a way for me to describe a period of great insecurity. I was wondering what I was looking for in love relationships… Why did I absolutely need this validation? The answer: clearly, it’s compensation! It is also the fear of loneliness. What we are presented with is a romantic version of stable and harmonious love. So there’s a clear gap between the nuclear-family model I grew up in, and our age of web-based applications for serial love. This “self-sufficiency” was a way for me to live my femininity, but it was really confusing. I hope one day to be at peace with myself, but I don’t see a time when I will reach full wholeness. When I wrote this album, in any case, I hadn’t really accepted yet that it might be impossible to achieve this. There was always this tension between the dream of a pure feeling of emotional comfort and the uneasiness caused by waiting for an ideal of love that one never reaches.

PAN M 360: Thematically, then, the songs are usually built around “Someone New”, aren’t they?

HD: “Someone New” talks about the end of the twenties, the end of youth, ageing, the construction of female identity on the male gaze. I didn’t blossom in a stable relationship, I questioned myself as such. What do I want? The nuclear family? Romantic success? To feel desirable? The songs lie in resistance to this deceptive ideal or in the hope of getting closer to it, or even in fear of the impossibility of achieving it. The songs “Comfort Edge”, “Pale” and “Fruit Pick” express these confusing, complicated, stressful states. “Someone New” still carries hope, the narrator asserts herself and ultimately finds peace. “Neutral”, in the end, is a kind of mantra… In the end, these songs underline that there is no perfect way to exist. Wisdom is to accept it.

PAN M 360: Successive listens to Someone New don’t lie – there was a lot of care taken in the production. Tell us about that!

HD: This is clearly the result of my intention to extend what I heard in my demos. For me, it was super important to take the songs as far as I could on my own. For my previous experience, I was working with someone who was very experienced and very confident. All my EPs were recorded with Jesse McCormack. He does everything and didn’t have to wait for me when it took me a while. The rhythm was his own. That was fine, but it was hard to measure my own insecurity in the studio. I wanted to know what I was capable of. I felt the need to slow down the pace, I found my own. A lot of thinking! Through that, my new colleagues helped me to correct or find solutions to problems. They helped me to find what worked.

PAN M 360: More specifically, who did you work with?

HD: I first played my demos for my friend Valentin Ignat, whom I had met when we were both baristas in the same café. He studies electroacoustics at Concordia University. He has a very geeky approach to sound, textures, details. I wanted us to do this together. It hasn’t always been easy, we didn’t always know how we would bring this project to fruition. In some songs, we could get stuck in a corner! So the band played, we recorded, Valentin did a pre-mix and then I was ready to work with someone more experienced than us. Gabe Wax is a star producer in the indie world, he’s worked with War on Drugs, Fleet Foxes, Deerhunter, Adrianne Lenker, Soccer Mommy, many others. He put a fresh wind in there, some songs have been completely rebuilt. At this stage of the project, it was really inspiring to work with Gabe. All in all, Valentin and I worked from July to November, Gabe and I worked from November to January.

PAN M 360: You studied French literature, so it’s possible that French texts could also pop up in your repertoire, no?

HD: Yes, I’d like to, but I feel I’m less well-educated in French-language song. In fact, my father is francophone and my mother is anglophone, born of Irish immigrant parents (McCullough). My parents had a more anglophone musical culture, even if there was Gilles Vigneault or Jean Leloup playing at home. My parents are from Montreal but they made their careers in Quebec City, which is why I grew up on the south shore of Quebec City. I lived there until the end of CEGEP. Then I travelled, I came to live in Montreal, I did a baccalaureate in literature at UQAM, and then I was super lucky with music.

PAN M 360: Talking to you, you have a very clear sense of the two cultures in you, franco and anglo. This is a facilitator for a career of your type, that is, for all markets where they love English songs. You’ve toured with famous artists such as Whitney, Weyes Blood, Connan Mockasin. You even opened for Iggy Pop in Paris, you worked with JPEGMAFIA. Was that an intention from the start?

HD: My manager, Nicolas Fortin, first saw me on stage at the Casa Del Popolo. Then he listened to my first EP before its release and offered to work with me. At first, it was a no, and then… a yes. He’s very present, trustworthy and has his own label, Chivi Chivi (Lydia Képinski, Lysandre, Étienne Dufresne…).  I was at the end of the session, and we had been offered a tour with the American band Whitney. We did it. So, yes, we wanted an international career right from the start.