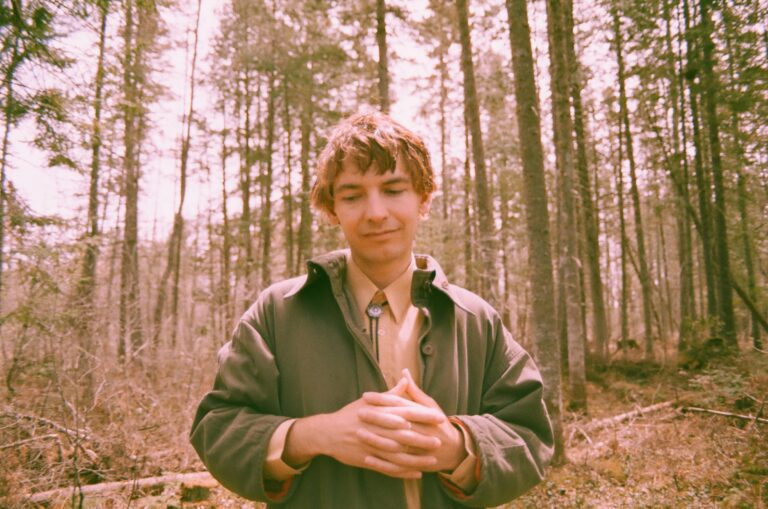 The name Gus Engle might ring a bell for snowboarding fans, but the music of Gus Englehorn reminds us of the joys of childhood—when you would make up fantastical stories, deep in the woods with your friends. A past professional snowboarder and now a full-fledged musician, Gus Englehorn’s second album, Dungeon Master, released later this week, is a bizarre and refreshing piece of avant-garage pop-rock.

His lyrics feel like they are pulled from chimeric short stories filled with wizards, horses, spiders, and surreal unexplained locations. In a music industry full of insipidity, Gus Englehorn, proves that you can be whoever you want.

The instrumentation on Dungeon Master is studded with jangly guitars, sparkly synths, glockenspiel, and hazy drumming, as Gus leads you on his darkened odyssey. It’s quite hard to feel bored with Dungeon Master. It feels like a choose your own adventure saga.

We caught up with the Alaskan-born, now Montreal-based singer-songwriter to learn about his inspirations, love of fantasy, and his wife Estée Perda—who plays drums on his albums and has been cited as sounding like Moe Tucker (drummer of The Velvet Underground) on salvia.

PAN M 360: I haven’t really heard anybody with your sound before, which is always really fun for me, because I interview musicians all the time. When you’re like writing your songs, do you write in the vocals screams or like drawn-out “ahhhhhs?”

Gus Englehorn: It’s kind of me just playing the guitar and freestyling lyrics over the top. Most of the stuff comes off the top of my head. Like my wife will be making a painting and I’ll be trying to make her laugh with some crazy lyrics and stuff. I don’t think I’ve ever written down a big drawn-out “ahhhh” or anything (laughs).

PAN M 360: So the lyrics are based more on the feeling you get from the guitar or other instruments?

Gus Englehorn: Yeah it happens one of two ways. Either I write down a short story and put music to that or I come up with little stories as I’m playing.

PAN M 360: Is that where the title Dungeon Master comes from? Are you writing little Dungeons & Dragons stories?

Gus Englehorn: I’ve always been really into fantasy, like video games, books, and movies, but the title came from one of my shows actually. By the time I was doing the launch for the first album, Death and Transfiguration, I had a partially finished version of the song “The Gate,” and this guy was yelling “encore” so I played it. And the same guy came up to me after and was like ‘Man, I love your lyrics it kind of reminds me of Dungeons & Dragons. You’re like the Dungeon Master up there, leading us through this crazy campaign.’ So it kind of gave me a direction to go of me as this Dungeon Master omnipotently leading you through these strange situations.

PAN M 360: I think the title for the album definitely makes sense. I mean, “Exercise Your Demons” is very much like a necromancer casting a spell on you.

Gus Englehorn: Yeah exactly. I guess that was the vibe I’m going for (laughs).

Gus Englehorn: That’s one of my favourites on the album. That one, I just imagined this terrible horse who kicks his master and goes and runs off, and then, he drinks from a poison river. His soul leaves his horse body and he’s in Hell and he tries to escape. And it’s also about a party animal, like a person who has a drinking problem and is drinking from the poison river and just getting rude. I guess it’s a little fable. A lot of them on this album are little fables I guess.

PAN M 360: You were a professional snowboarder before you were a musician. What led you to making music?

Gus EngleHorn: So I think I like started playing guitar when I was like 16 and I was just kind of like writing songs the whole time I was snowboarding. I would always kind of do it. But yeah, I think I was imagining a day when I would become maybe too old to snowboard and I was like ‘Well I need to do something. I don’t wanna just curl up and die.’ So I kept trying to write songs and then when snowboarding did end I still didn’t really know how to write songs even though I had been trying for years and years. So there was a period of three to four years where I was really trying to learn how to write music. Like waking up and trying to make a demo or something. Then I made that first album after like three or four years of being broke with no job.

PAN M 360: And when you were constantly trying to write songs what did you use as inspiration? Other music?

Gus Englehorn: I think the reason I write songs is just to sort exercise my imagination and be as creative as I can. So a lot of it comes from that desire to explore new ideas. But then there are influences from films and different art movements like the surrealism and the Dada movement. And then there are bands like The Pixies, Daniel Johnston, Leonard Cohen, and then my own personal experiences I suppose.

PAN M 360: And your wife, Estée, is your drummer. How did she start playing drums for your music?

Gus Englehorn: Well we had already been dating for 10 years when I released that first record. We had a different iteration of the band where we were both playing guitars and we tried to play with other people but it never really worked out. Then eventually she just hopped on drums and it really seemed to click. She can kind of do anything. She’s very musically inclined.

Gus Englehorn: That’s just me, but before we go into the studio she adds drums and we make little demos and we both try to come up with different arrangements. But sometimes she’ll come up with a lot of the basslines and glockenspiel stuff.

PAN M 360: You’ve lived in many places—Alaska, Salt Lake City, Hawaii—would you say that has an influence on your trajectory as a musician or creative person?

Gus Englehorn: Yeah I think so. I think just being in Alaska seems to do something to your brain. You kind of feel like you’re hidden away from the world and there are a lot of colloquialisms and individuality there and lots of unique characters. So I think you just feel free to do what you will. So it had an influence on my ideas of being an individual.

PAN M 360: Have you had any opportunities to play a show there?

Gus Englehorn: We did play one last summer in my hometown, a fishing village called Ninilchik. It was called Salmon Fest and it was kinda a Bluegrass festival. But people were pretty cool and I think some were a little horrified. Alaskan festivals can get pretty crazy too. When we were playing it was like pouring rain and by the end of the set, there was like a pile of people mud wrestling. It was pretty crazy and I think stuff like that only happens in Alaska.