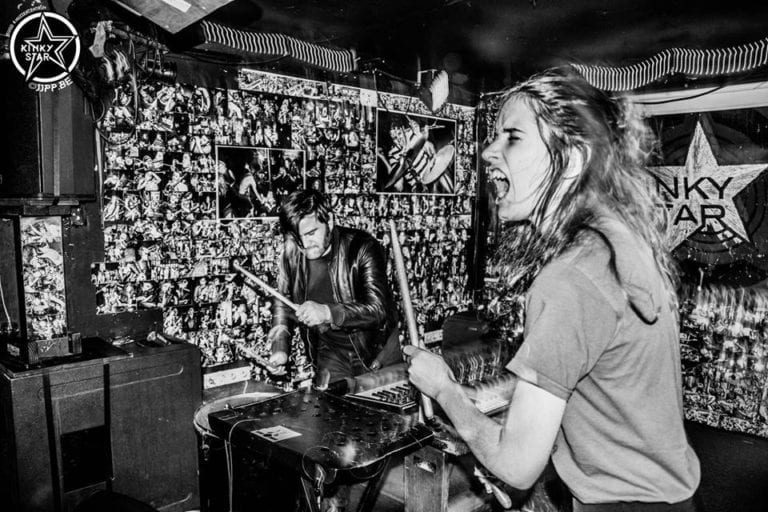 PAN M 360: How did your respective musical approaches connect, to become what your band is today?

Silvia Konstance Constan: Coming to Barcelona in 2014 and working in Màgia Roja, both a label and an alternative cultural centre closed last December, completely changed my life. Here I discovered most of the music that sculpted my tastes. After a few years of immersion in this underground community, I decided that I wanted to do something on my own, and I ended up jamming with Víktor and recording what would become the first song of Dame Area, “Luce”. It was at the end of the year 2015.

We started doing other songs again only in early 2017. At the beginning, we didn’t talk about the identity we wanted to have, we just started to play and little by little, we realized that we had something special.

Víktor Lux Crux: In addition to producing and recording records for several musicians, I’ve played in different projects over the last 15 years. My first serious project was the band Qa’a. The concept had to do psychedelic and tribal minimalism, combined with what Can, This Heat and Nurse With Wound were doing in the studio. At the end of 2013, I started a trio, Ordre Etern, where I did vocals and developed homemade guitars and instruments, very influenced by Swans, Einstürzende Neubauten, power electronics and black metal. In 2015, I started to have weekly DJ gig in Màgia Roja until it closed. A few months after the death of Ordre Etern in 2017, Dame Area was born and I immediately understood that I had never had a collaborator like Silvia.

PAN M 360: Màgia Roja seems to go beyond the simple framework of the show-bar. What effect has this creative space had on your musical project?

SKC: First of all, Dame Area wouldn’t exist if Màgia Roja hadn’t existed, and that explains quite well the close link between the two. Everything we experienced, learned, and discovered through Màgia Roja shaped us as people, which then translated into the music of Dame Area. A kind of symbiotic relationship.

VLC: We’d never known such a place before, which makes it harder to describe. Maybe you could say it was an anti-club, a place of freedom, very wild. The members nevertheless behaved there as a kind of extended family. People danced there in communion to sounds you’re only supposed to hear in your room. Weird and surreal situations would occur spontaneously.

PAN M 360: Given the current crisis context, how was the launch of this latest EP carried out?

VLC: There was no official launch, but before the virus arrived, I played almost all the songs at some point in Màgia Roja before playing them live, to test them somehow. In particular, “La Notte É Oscura” and “La Soluzione É Una” became kind of local hits.

PAN M 360: This is your fifth release in only two years, in addition to travelling a lot – how do you divide your time between recording, rehearsals, and touring?

SKC: Since we created Dame Area, the band has always been our passion. When we worked at Màgia Roja, we could organize ourselves to tour whenever we needed to, and I think that’s a key point compared to a normal job, where you depend on your holidays to tour. We live on the first floor of Màgia Roja and we have always rehearsed and recorded – and we always do – in the room itself, which is very convenient, because all the material is already there and all you have to do is go downstairs. This makes it possible to record songs quite quickly too.

VLC: We are both very creative and we complement each other quite well. I’m more obsessed with details and sound, while Silvia is very good at not complicating things and finishing what we are doing, so you could say that we balance each other. Our music is a free-for-all, we keep the best ideas, no matter who did what. In the end, the music is divided fairly evenly.

We don’t like to take out filler tracks, so there are a lot of discarded songs and failed experiments. So far, all our songs, without exception, have been played on the radio, which is quite remarkable for us and it would be nice if it stayed that way.

PAN M 360: On La Soluzione é Una, we find the industrial-tribal signature of your album Centro Di Gravitá. How did you approach the creation of this latest opus?

SKC: The songs of La Soluzione é Una were recorded between 2018 and 2019. It was only in the fall of last year, when we decided to release another EP, that we chose from our library some existing songs that would fit together, and the EP took shape. Three songs are like that, because that’s how it sounds for us, but it was neither intended nor planned.

VLC: There are two or three songs with tribal elements, but we consider this release as more industrial-synthetic. We didn’t put more tribal songs in this EP because we kept them for our second LP and we created a lot of songs in a ‘cold tribal’ style, so to speak. There are some Throbbing Gristle accents, but I think we are more and more influenced by ourselves, by the idea of the band.

PAN M 360: The lyrics play a central role in your music, how do they come about?

SKC: The words are always mine, even if sometimes Víktor suggested a subject or a concept. I’m very interested in the process of learning new languages and how the mind of a polyglot works. This has eventually led me to write lyrics in most of the languages I speak.

I started singing mostly in Italian. It was a way of connecting with my inner self by speaking my mother tongue that I never use while living in Barcelona. And not using it regularly helped me to find my own musicality of the language more than if I had lived in Italy and spoken it every day. Somehow I felt like having fewer rules in mind and more freedom in the use of words and syntax. Then I started to make songs in Spanish and also in Turkish, as on the song “Zaman çabuk geçiyor”, and in German.

Each language has its own musicality, and searching for it is like a challenge and a game at the same time that leads me to new ideas and melodies. Each language is linked to a different part of my character and personality and it is a door to express different aspects of myself.

PAN M 360: The situation relating to the COVID-19 crisis has been quite difficult in Spain. How can this situation, however complex, be translated into music?

SKC: We don’t count the days of confinement anymore. On the one hand, this forced break has given us time to work on our music. We’ve finished our next two releases and we’ve made about 10 new songs in the last few weeks. The music of these days helps us more than ever to escape the reality of the outside world. We’ll have to find the light at the end of the tunnel, I guess. And music will help us get through it. But who really knows what’s going to happen two weeks from now?