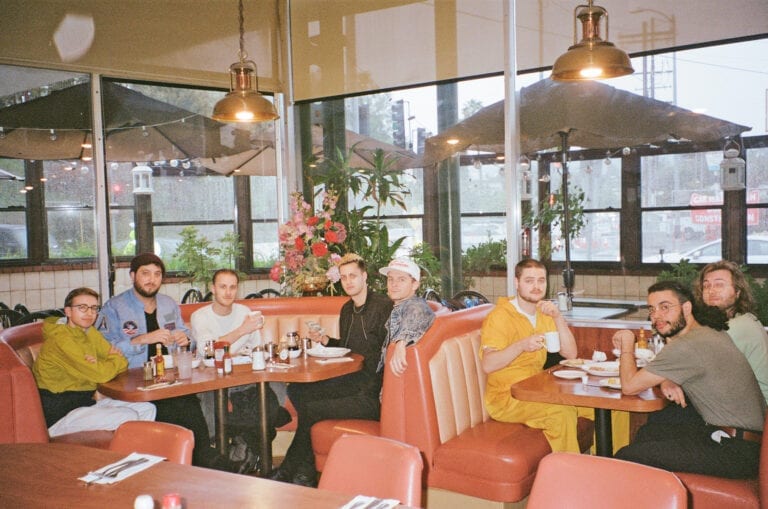 There are eight of them. Four Canadians, four Americans. They met at McGill University in the early 2010s, decided to stay in Montreal and began to expand internationally. In 2017, Busty & the Bass launched the album Uncommon Good on Indica, now here’s Eddie on the Arts & Crafts label, an ambitious production by Neil Pogue with prestigious guests George Clinton, Macy Gray, and rappers Illa J and Jon Connor. Bassist Milo Johnson sums up the new chapter.

Clearly, the golden age of the “Montreal sound” is far behind us. The hipster generation is in its forties, Arcade Fire and the rest have toured the world, we’re two decades later and… here are new residents with big dreams, more inclined to R&B than indie rock. Busty & the Bass have the firm intention of conquering the global soul-pop market, this time blending with hip-hop, electro, and jazz.

“I’m from Washington D.C.,” says Johnson. “When I was 17, I came to Montreal, almost nine years ago, to study music at McGill, where I met all my friends in the band, and I decided to stay. Montreal is a great place to be for everything I’m interested in.”

The new album from Busty & the Bass was built around a concept: Eddie. Johnson offers an outline.

“Eddie‘s a fictional character. The record as a whole is a kind of mixtape, conceived as a message for our young selves, a kind of beacon that serves as a light at the end of the tunnel, that helps us get through the difficult moments and the uncertainty that overwhelm us, that helps us reflect on what we have been and what we have become today.”

For Johnson, Eddie represents an important and even decisive advance in the development of Busty & the Bass.

“It’s certainly a huge step forward, after a long and winding journey. This new album is a kind of pinnacle of our pop output, and a dream in terms of the characteristics we were able to achieve on this record. We went into the studio and used it more as an instrument. We did a fully fleshed-out recording process there, done by real, live musicians. When you express that through eight musicians, incredible things come out of it. A lot of lushness, more maturity acquired in writing, in the instrumentation and in production. So, yeah it’s a big step in that direction. In addition, we have diversified the musical genres even more, you’ll hear more jazz and classical influences, for example, chamber-music sections have been woven into pop songs. I think it’s a wonderful encounter that comes across beautifully.”

From the very beginning of their recording career, the musicians of Busty & the Bass were able to work with producer Neal Pogue, whose resume is impressive – Outkast, Anderson Paak, Janelle Monáe, Tyler the Creator, Nicki Minaj, and Earth, Wind & Fire, to list a few.

“Neal is originally from New Jersey, he worked in Atlanta for a while producing and mixing, and then moved to Los Angeles. I think it’s really cool for us to work with someone of that stature, who was involved in the music industry even before the digital era, because many recording practices from before get lost. The nature of production used to mean working with a group of instrumentalists, whereas nowadays, most of the time, producers create the track and the singer goes on top. Neil has worked with big bands like Earth, Wind & Fire – here with us in the studio is someone who helps create the sound and facilitate our musical journey.

“I think the most interesting part is going through a second full-length album process with the same producer. It’s just beautiful working with somebody who knows all the personalities, and is able to get the best out of us. Pogue has really helped us all grow as individuals and musicians. He always says that for him working with us as a band was like having eight kids. That was such an honour to collaborate with amazing artists and elders in the music industry.”

It should also be noted that Pogue’s network includes Verdine White. The legendary bassist of Earth, Wind & Fire participated in the production of this album.

“Verdine got involved with us after seeing a couple of our shows in Los Angeles. He and Nick had meetings in L.A. about our recording sessions, he’s been a great supporter, providing feedback on our songs, thinking about the best selection, and he and Nick have done some writing together for us. Pretty unbelievable, actually! When I was a kid, I was going to give my dad a record as a birthday present, I bought this Earth, Wind & Fire compilation. Then I played bass along with this music.”

In addition to Michigan rappers Illa J and Jon Connor, Busty & the Bass had a special guest. The legendary George Clinton, one of the founding fathers of psychedelic funk, expressed himself on the song “Baggy Eyed Dope Man”.

“George Clinton is one of my living idols. Just for his ability to create his Parliament-Funkadelic universe, and also his side projects. Musically, visually, conceptually, he’s such a legend, we are so indebted to him for everything he’s given to the music. So yeah, we got the idea of having him featured, we developed the song around that so we also put in a doo-wop section, reminiscent of his early days. We were super lucky to have him.”

Another guest star on Eddie’s programme is the singer Macy Gray, who enjoyed a heyday at the turn of the 2000s.

“Our relationship with Macy Gray goes back a while because we covered her stuff at our early beginnings as a group. With this song ‘Out Of Love’ developing, we had suggested her feature… we thought it was hilarious and would never happen. Neal had also worked with her, it was just a lucky line in. I really love what she ended up doing on the track. Incredible musical and writing abilities, such a pleasure to work with her on this.”

Busty & the Bass choose an approach reconciling neo-soul, R&B, hip-hop, and jazz groove mixed with electro and the legacy of legendary combos such as Earth, Wind & Fire, Parliament-Funkadelic, Tower of Power and Average White Band. The brass and reed arrangements are reminiscent of Roy Hargrove’s work for D’Angelo…

What’s up? Retro-nuovo? Not quite, Johnson suggests.

“With us, it’s a constant effort for a new combination of sounds, we’re really lucky to have come up just being very aware of our musical history, the legacy that we’d learned from and our walking through the lineage of. So it’s a never-ending process, there’s always a new way of recontextualizing stuff that we’ve already learned. We are interested in a massive scope of different music that have been produced, even in the last five years, but we also have a connection with music from the previous decades.

“Everybody writes in the band, we’re trying to blend so many different voices, to keep them unique but also not water them down. We stay true to the history, but we also try to create something new. Moving forward, we’re constantly building upon a foundation that we handed down to us. It is one of the most exciting drivers for us.”

Respect for the past, openness to the future… necessarily marked by the digital environment. For an octet made up of university-educated instrumentalists, this is another ecosystem to be mastered in order to avoid redundancy and nostalgia.

“We’re instrumentalists, but many of us are producers in our individual side projects. Many of those projects are very influenced by electronic music, from techno to dubstep to electronic jazz. One of the super exciting things in this band is being able to bridge those two worlds. There’s not a ton of overlap, but you’re able to express so much with so little. You can now take an acoustic piano and make it sound like anything you want. I think that there’s so much freedom and opportunity in a studio production context, especially when you’re working with such beautiful recorded material. Yeah, we aim for a beautiful blend between instruments and an electronic approach.”

As for transposing the material to the stage, it has to wait a while, pandemic and all. Nevertheless… more revisiting is yet to come.

“When you try to recreate a record for a show, it doesn’t really do justice for what you are as a performer. The fun of transitioning from the studio to the stage is rather in finding what can surprise the audience. A live show is its own experience, its own piece of art. And there are eight voices in the band, it presents so many possibilities of music and layering, especially in a live sense, and I think that live show experience is something that people don’t get now, very rare in these days. So it is important for us to build on that legacy.”