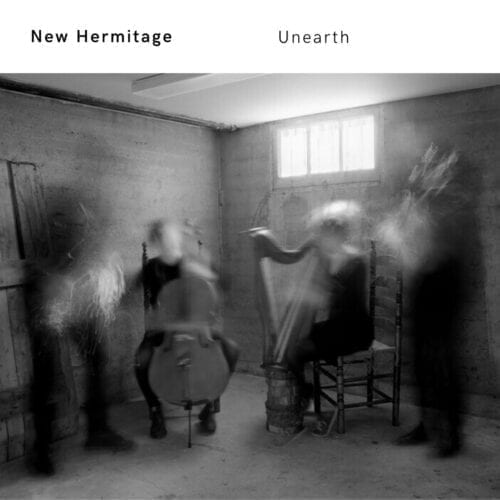 The improvised music quartet New Hermitage comes mostly from Halifax (only cellist India Gailey, who recently completed her master’s degree at McGill University, is based in Montreal). Their first two releases (One in 2017, and New Hermitage + Jeff Reilly in 2018) were nominated for the Music Nova Scotia Awards, with the second winning the Classical Recording of the Year.

Andrew MacKelvie (alto and tenor sax, bass clarinet), touted as the leader of the group, remains steps back a bit in comparison to what we’ve heard from him with other projects (There Never Was A Plan. or The Original Folk Trio, for example). It must be said that not only does the ensemble mainly put the strings forward (Ellen Gibling’s harp, Ross Burns’ electric guitar, the cello), but that everyone moreover does so with economy of means and voluntary simplicity. Although each of the members of this equal quartet are leading instrumentalists, it is hardly the music of virtuosos who would like to showcase their particular talent.

Inspired both by the concept of deep listening – developed by Pauline Oiveros – and by the logic of dreams, the dozen or so relatively short pieces presented by the quartet in this fifth effort continue the exploration of the textures offered by their particular composition, which the ensemble more often present in long form. The music develops from a rather sinister dystopian imagination (“Skeletons”, “Stalkers”, “Desertification”, etc.), but in the end, it’s still just a dream.