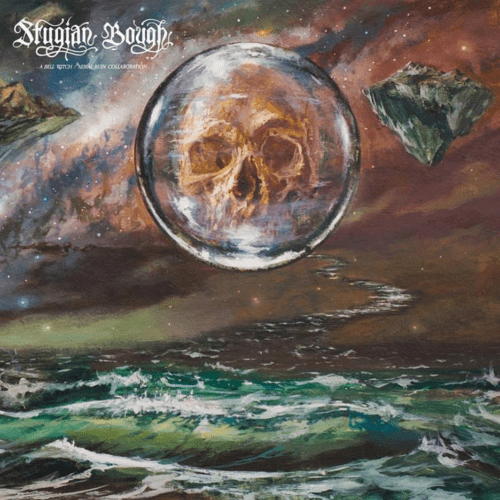 Composed of bassist Dylan Desmond and drummer Jesse Shreibman, Bell Witch trades in funeral doom, one of the most skeletal branches of the great metal tree. On the other hand, Aerial Ruin is the pseudonym used by singer and guitarist Erik Moggridge for his dark folk cantilenas. Stygian Bough is the new banner under which these beautiful people have joined forces.

This isn’t the first time these dark fellows have collaborated, as Moggridge has lent his voice to the funeral chants created by the Seattle duo since their beginnings. This time, however, the Portland, Oregon folk artist isn’t relegated to the role of guest singer. The three musicians conceived their new compositions together. Thus, ghostly laments and monoliths of electric gravity sit side by side on this record, sometimes in a single song.

Stygian Bough is a meeting that turns to the advantage of each of the parties involved. While the acoustic pieces that bear the Aerial Ruin signature shine more brightly thanks to the bass, percussion and Hammond organ played by the two members of Bell Witch, the heavier passages sketched by the duo gain in richness from the contact with Moggridge’s electric guitar. The production by Randall Dunn, one of the most renowned experts in the field of heavy rock, magnifies this marriage. The feeling of confinement that is usually conveyed by the music of one or the other of the two metal entities involved is all the greater for it. A union from which we can’t wait to see what happens next.