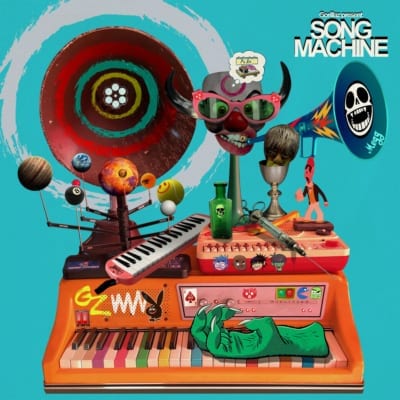 For more than six months now, Gorillaz have been distilling weekly tracks from their new opus Song Machine, Season One: Strange Timez. It’s with undisguised pleasure that we find Damon Albarn and his band back with an album that deserves to be described as “all-star”. Surprise guests certainly materialized on previous albums, but this time all the songs feature star power. What a delight to hear Sir Elton John joining rapper 6LACK, or the great Tony Allen alongside the English grime star Skepta.

Each track of this refreshing release has its own atmosphere, with a certain softness and charm. It’s always difficult to predict, to say nothing of qualify, the music of this extraordinary band. The melodies don’t deceive, however, and the mix of genres is very well thought out. Witness “Dead Butterflies” with rapper Kano and Roxani Arias, whose Spanish vocals bring a wonderful ray of sunshine. A new album by Gorillaz is always synonymous with an auditory journey. A detour is made to the Congo with the voice of Fatoumata Diawara on “Sorry”, while the rhythm takes over with Earthgang’s shifty rap, quite surprising and effective on “Opium”. “With Love To An Ex” (with Moonchild Sanelly) is another example of the diversity of genres on hand. Albarn also doesn’t forget to highlight the musicians of the British scene, Robert Smith (The Cure), Peter Hook (New Order), Leee John, Octavian, Kano, the sensation Slowthai and Skepta are also on the bill.

If one never knows where Gorillaz will take things, this album has the merit of surprising with every track. There’s not really a common thread this time, but each of the tracks is a very distinct project and they’re all as good as each other, especially as they explore and mix genres, breaking all barriers without ever making a wrong move. And there may be nothing surprising about the form, but the substance is always of excellent quality.