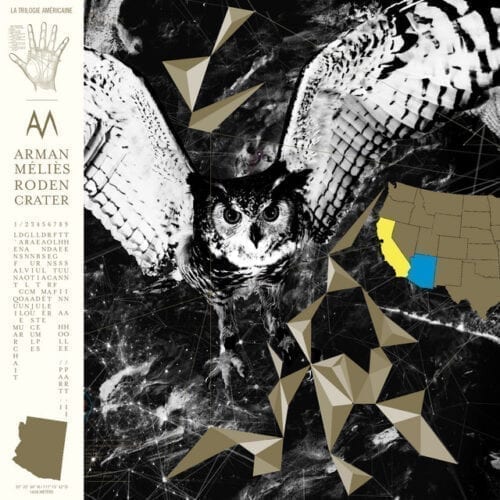 In 2018, Arman Méliès, master songwriter and doctor of cybergloomy ambiances, released Échappées Belles Vol. 1, a collection of successful covers by singer-songwriters Juliette Armanet, Fishbach, Blondino, and Maissiat. Here he is again with Roden Crater, an instrumental album (apart from a few lyrics on “Dans la mêlée”), the first part of a trilogy inspired by American mythology that will also include Basquiat’s Black Kingdom, another instrumental opus expected this summer, and Laurel Canyon, an album of songs scheduled for January 2021.

Méliès has been composing these nine tracks over the past two years, drawing inspiration from the work of James Turrell, an American artist – also a graduate in mathematics and psychology – who explores light and lives in Flagstaff, Arizona. In the 1970s, the Dia Art Foundation purchased, on behalf of Turrell, the land on which the Roden volcanic crater is located in the Arizona desert (hence the title of the album. Turrell transformed it into a gigantic light art installation-observatory.

Méliès has had a lot of ideas since he hid behind the alias Gran Volcano – the title of one of the songs on the album – to do an instrumental performance in 2012, and one of the highlights of his album Vertigone (2015) is called “Le volcan, même”. All of Roden Crater‘s tracks were performed on analog or programmed synths, then recorded by Méliès. Seb Fouble, half of the electro duo Remote, mixed the whole thing.

Some passages, including the first half of “Gran Volcano”, remind us of the marmoreal feel of the album Casino (2008). From “L’enfant qui marchait dans la couleur” to “The Sun In a Hole Part II” and “Flagstaff”, we feel like we’re following the trail of a humanoid wandering in a canyon; snipers point their laser pistols at him, but we can’t warn him of the danger… Listening to these sarabandes is also like passing through an honour guard in which, ad infinitum, Terry Riley, John Carpenter, Brian Eno and Wendy Carlos stand facing M83, Air, Burial, and Com Truise.