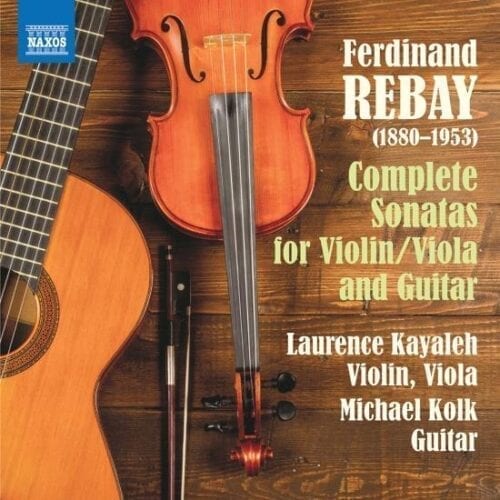 Austrian composer Ferdinand Rebay’s work during the first half of the 20th century was essentially romantic, neo-classical music. Almost all of the sonatas on this album could have been written in 1850. Is this a great flaw? Not if we let their outdated charm – and especially Laurence Kayaleh and Michael Kolk, thanks to their subtle and delicate playing – convince us of their benefits.

Rebay wrote symphonies, concertos, operas, oratorios, and all the usual tralala of a late-Romantic European composer, but he also set his sights in his twenties on the guitar, an instrument for which he never stopped writing for the rest of his life. So much so that this corner of his catalogue counts more than 600 pieces! More than anything else. He used the guitar in many combinations, in chamber music, as a choir or vocal soloist accompaniment, and as a soloist, of course.

The sonatas here make one want to hear more from Rebay, today an illustrious unknown. One must be tolerant of a style that was already old-fashioned at the time of their creation, of course, but the pleasure of these simple phrases tinged with refined elegance, supplemented by the beauty of the playing of Quebec’s Laurence Kayaleh and her colleague Michael Kolk from Vancouver, ensures an hour and a half of sober and candid satisfaction.

Music full of simplicity and tenderness, oscillating between episodes of melancholy and graceful mischief, and carried by two musicians who are very sensitive to moderated but assured expression it demands of them.