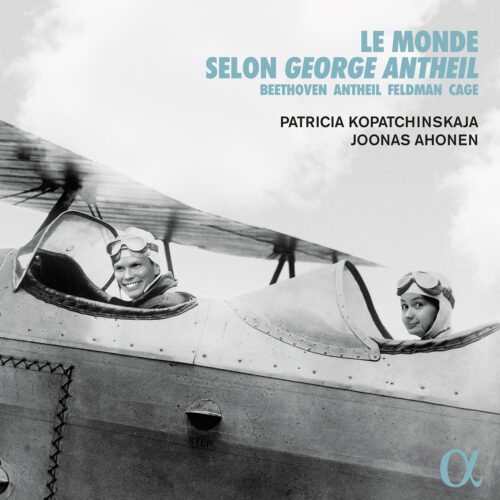 What a fascinating artist George Antheil is! An American well rooted in the creative Europe of the early 20th century, his often percussive (no matter the instrument), mechanical and propulsive music is a sort of sonic evocation of Italian futurism in the visual arts. Like the artists of this school, Antheil loved technological modernism, fast cars, planes, movement, feverish and even destructive energy. In his music, one can also sense Cubism with its angular lines, its sudden reversals like so many sharp, improbable angles of faces painted by Braque or Picasso. Antheil knew the great names of his time, but he had particular elective affinities with other originals, iconoclasts even, of his present or of the past, hence the idea of this album, which traces a limited but adequate portrait of the musical universe that inspired the man called “The Bad Boy of American Music”.

Beethoven is first in line. Antheil had this to say about the Sonata No. 7, Op. 30 No. 2 for violin and piano :

The first theme, what a noble theme, as noble as the true love of a man for the woman he marries. Here comes the second theme, in the dominant, a lighter key. This is the mistress. The mistress always appears only some time after the wife and she is in a lighter key. But don’t worry, in the reprise, the theme of the mistress will be just as boring as that of the wife, in the same key. But now comes the development. This is where the wife learns of the existence of the beloved and makes a scene of all the devils. Here they are: on the left hand, the wife, on the right hand, the mistress. People say that this is a counterpoint. I call it a catfight. What a wonderful master, this Beethoven!

Antheil was as good a writer (journalist) as he was a composer. It will come as no surprise to learn that he was also a friend and admirer of contemporaries such as Morton Feldman and John Cage, whose two short pieces (Piece, and Extensions 1 in the case of Feldman) and Nocturne (Cage), for violin and piano, are included.

Of course, the highlight of the show (for it is one thrill ride under Patricia Kopatchinskaja’s fingers – Pat Kop!) is Antheil’s Sonata No. 1, which premiered in 1923. Yet admired nowadays by those ‘in the know’, Antheil is rarely featured on recordings, let alone concerts. This is a pity because as this furiously energetic sonata demonstrates, it has everything it takes to seduce an audience eager for strong sensations and modernism that knows how to shake things up while remaining emotionally accessible. A true schizophrenic rollercoaster, this Antheil sonata oscillates constantly between episodes of violent frenzy, ironic humour and mysterious, menacing calm. The last movement, in particular, is a concentrate of sonic fury, both frightening and totally exciting! It has to be heard to be believed.

There was probably no more appropriate artist to play this music. Pat Kop is used to slicing, even eviscerating, scores like a forensic scientist does to a body. But, like an unlikely cross between Drs. Frankenstein and Moreau, she reconstructs her victims as she sees fit, completely stripped of their fat. All that remains is the skeleton and the muscles. She didn’t have to worry too much in the case of the Antheil Sonata, for the natural frugality of the work already did the job, but in the case of Beethoven, she will certainly make enemies with this totally stripped-down but oh-so-innovative version of the Op. 7 Sonata. Never, I think, has Beethoven sounded so abrasive but essential, so gritty but true. One almost catches her pitch-distorting it here and there, to make it even more visceral. This rereading will not be for everyone’s taste, but if you have the slightest sense of exploration, you’ll come away delighted, albeit exhausted.

The pieces by Cage and Feldman, all contemplative placidity, are sublimated by the almost mystical timbral stripping down imposed by the violinist. The pianist Joonas Ahonen is a true genius, if only to be able to follow the lady in all her delirium, and with remarkable aplomb.