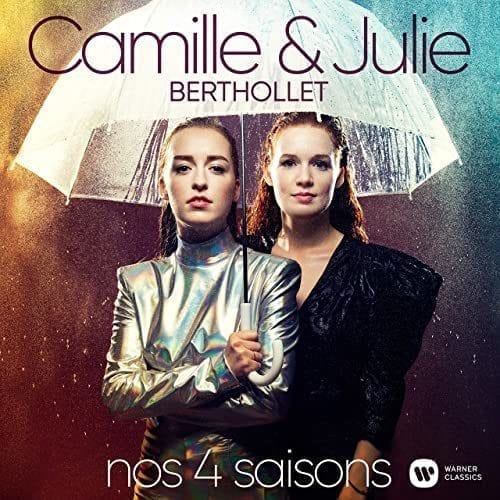 We like “renewed” interpretations and “revisited” works, even “rewritten” (or “recomposed”, like Brian Eno’s alterations of Max Richter’s Four Seasons or Pachelbel’s Canon). Because each new reading reveals something of the original. And as with The Rite of Spring (of which The Bad Plus did a magnificent trio version) or the Ninth (of which you may know the interpretation by the Camerata Cassovia ensemble, accompanied on drums by Massimo Aiello), there are more than 1000 recordings of Vivaldi’s Four Seasons. Moreover, it is a work of the Baroque period, so many details are left to the taste of the performer; ornamentation, dynamics and even tempi are likely to be personalised by the soloist of the day, and this is what makes this or that version good or bad.

Camille and Julie Berthollet are stars of classical music in France, and Paris-Match readily refers to them as the “prodigy sisters”. In order to stand out from the crowd when playing this super-familiar work, they had to go overboard, and that’s what we’re given here: a accelerated version in which virtuosity becomes somewhat flashy, and some movements will not displease fans of cello metal à la Apocalyptica. The first four concertos in the collection are axe-carved, some movements being really rough, while others, such as the Adagio molto from “L’Automne”, show a restraint of exquisite taste. In short, a rollercoaster version that is perhaps, after all, more faithful to the idea of what a year should be like, with well-defined seasons, rather than a long grey period followed by three summer days?

The multi-instrumentalist sisters (Julie is a violinist, violist and pianist, Camille a violinist and cellist) are also singers, and they offer in addition four songs very freely inspired by the concertos of the “red priest”. It’s excessively mawkish and, frankly, one wonders what it’s doing next to Vivaldi, with whom it shares absolutely nothing. It’s a really strange choice, all the more so because after these pop songs, we come back to Vivaldi and the strings of the Orchestre national du Capitole de Toulouse for three movements taken from concertos of L’estro armonico. The whole thing ends with a remix in which Laurent Marimbert adds rhythm box behind the largo theme of “Spring”. If only it would make it move faster…