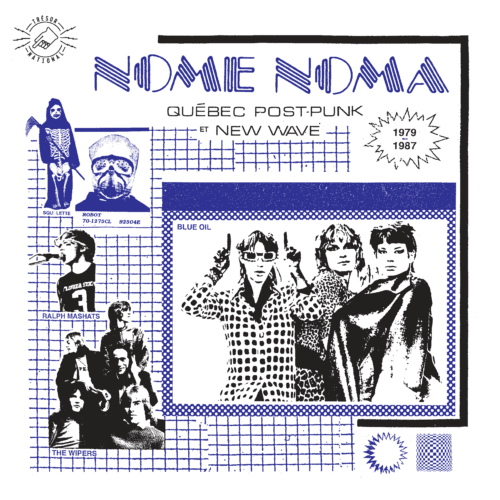 Born in the wake of late-’70s punk, new wave was in a way the logical continuation of No Future, as many of the artists who gave birth to the genre were first labelled punk. Already in 1976-77, we could hear the beginnings of new wave with bands (American, once again) such as Pere Ubu, Devo, Suicide, and Talking Heads. But it’s only from 1978 onwards that the genre started to structure itself and produce offspring. During its short existence, new wave was a nice catch-all in which one could find bands or artists whose closest common denominator would be the desire to provoke, to experiment with genres, music, fashion, the desire to be different, audacious, irreverent, in short, a bit the same modus operandi as punk. We can see why one has long been associated with the other.

Half the world succumbed to new wave, and Quebec certainly wasn’t left behind. Although the genre has long been associated here with the underground, it was nevertheless much more popular than punk, because it was much less violent and snotty, as the success of Men Without Hats and Rational Youth attest. That said, apart from the handful of bands or solo artists who have more or less managed to make their mark in Quebec, there are those who’ve always remained in the shadows. Érik Cimon, the director of the excellent documentary Québec New Wave, said that of the 600 or so songs he used for his film, three-quarters had never been released on record. It’s a bit on this track that the passionate archaeologists of Trésor National have set out. On this sharp compilation, pressed to 500 copies and embellished with a 16-page booklet, the team presents 13 titles (mostly) in English or French, today untraceable or totally unreleased, in the colours of power pop, punk, glam, coldwave and synthpop. And there are some real little nuggets on it, from Leyden Zar, with nothing to envy Cars or Gary Numan, to the Devo-esque derision of the Pogo Brothers, through the sweet electro-pop of Kaméléon or the more neo-romantic/coldwave flights of fancy of Demars and Pop Stress, Not to forget the vitamin-packed “Break Time” by The Chemicals and the catchy “Money” by Blue Oil, the first all-woman local punk band, NOME NOMA covers all the facets of new wave.

NOME NOMA, a title borrowed from the song by The Wipers (the band which included future BBs member Patrick Bourgeois, and which we can of course find on the album), NOME NOMA shows the originality, the singular spirit and above all the effervescence of this little scene which is still too little known today. With NOME NOMA, justice is finally done.