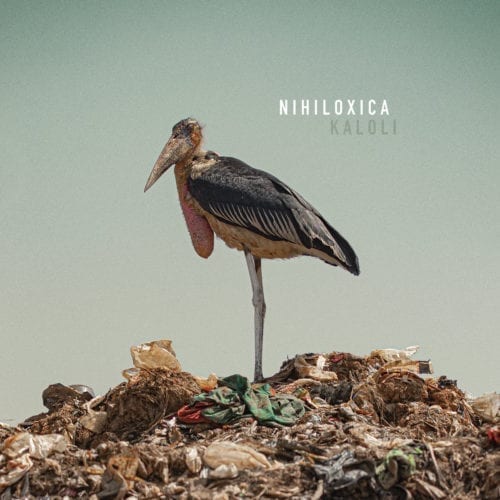 They say that when birds were created, God used the leftover parts to fashion the unsightly Marabou stork, also called the undertaker bird, or locally in Uganda, kaloli. The wretched-looking carrion eaters, beneficiaries of Kampala’s questionable urban waste management, may not be the prettiest birds in the field guide, but they’re as rugged as they are ragged, surviving and thriving. Not the worst choice of mascot, then, for Nihiloxica.

One of the flagship acts of the wave-making Nyege Nyege initiative – a festival, studio, label and more, championing Africa’s explosive electronic underground – the Kampala-based outfit has migrated with this new album, their biggest work yet, to the venerable Belgian label Crammed Discs, pioneers in the field of unconventional cultural hybrids.

Nihiloxica is the partnership between Alimansi Wanzu Aineomugisha, Jamiru Mwanje, Henry Kasoma, and Henry Isabirye, four top drummers from Kampala’s community-oriented Nilotika Cultural Ensemble, and English electronic producers Spooky-J and pq. With two widely noted EPs and several high-profile tours behind them, the six have steadily fortified their sound, and honoured the promise of their initial recordings.

Explaining the instrumentation and regional traditions in play here would be a daunting task, but the information is out there. What’s evident to the naked ear is that these complex, communicative drum patterns, rooted in different regions of Uganda, are a musical language in themselves. The conversations that occur between the raw, resounding beats and the eerie digital conjurations are nocturnal, even sinister in tone, potent, polyrhythmic hallucinations that don’t charm so much as ensnare and transfix.