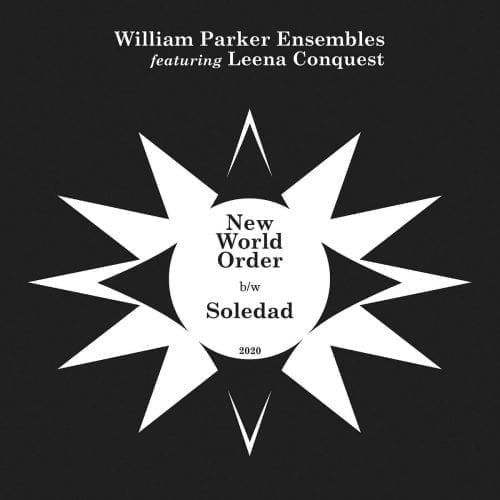 There’s a first time for everything. In the case of venerable jazz bassist William Parker, it’s not a 10-disc mega-super-package being discussed here, though that’s on it’s way – Migration of Silence Into and Out of The Tone World is due with the arrival of 2021 (an advance selection from that project can be found here). Nor is it books (Parker has authored two already), nor a festival (he oversees, with his wife Patricia Nicholson Parker, the annual Vision Festival in New York City). In this case, after 50 years in music and twice as many albums (as a leader, or with the likes of Cecil Taylor, David S. Ware, or Peter Brötzmann), it’s a humble seven-inch single that Parker puts his imprint on.

The A side is an uplifting live interpretation, from 2001, of the title track of Curtis Mayfield’s final album from 1996. Captured at the Banlieues Bleues Festival in Paris, the recording is crude and cavernous, doing little justice to the players at hand. It offers something else quite potent, however. With an uptick in tempo and touch of reggae in the rhythm, as well as a local children’s choir 90 voices strong and of course Leena Conquest’s stirring lead vocals, Mayfield’s wearied call for better days ahead is invested with a little more hope, and feels a few steps closer to being realized. And as muddy as the recording is, one can’t miss the sweet resonance of the African balafon amid the instrumentation, a touch that adds further warmth to what was clearly a joyous communal moment.

The B side is taken from 2007’s Corn Meal Dance, Parker’s album with his Raining on the Moon band (with Hamid Drake on drums). Conquest sings a chronicle of struggle that rolls out steadily until the midway mark, when the pressure breaks and the band erupts, initially in exasperation, but soon enough coalescing into something of strength, certainty, and invention. Perseverance, it seems, is the point of both of these tracks. Neither one is an essential in Parker’s voluminous discography, but either can be a revitalizing listen at the right moment.