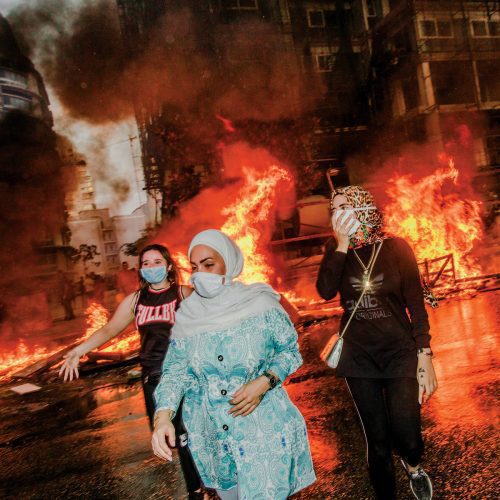 What artist other than the Lebanese-Canadian Radwan Ghazi Moumneh proceeds to these extreme mixtures of traditional/classical music from the Levant, dark ambient proposals at the borders of bruitism? Ask the question… Little by little, the audio mastermind of the audiovisual concept Jerusalem in my Heart has developed a unique language, distinct from all Middle Eastern and Western proposals. Metaphorically, this approach can be perceived as the emotional documentary of a Lebanese avant-gardist who testifies to the violent shocks suffered by his culture of origin and the aesthetic challenges to which it must now adapt. The Arabic dimension of this music remains unavoidable, the vocal proposals respect the melodic ones of the Levant, or explore Western avenues that few take. The diversity of guest performers testifies to the artistic depth: American multidisciplinary artist Greg Fox, Canada’s Alexei Perry Cox (his partner and ex-Handsome Furs), Afro-Belgian bassist Farida Amadou, Acadian multi-instrumentalist Pierre-Guy Blanchard, the great First Nation artist Alanis Obombsawin, Portuguese singer Diana Combo, avant-rock Québécois explorer Roger Tellier-Craig (Fly Pan AM), Black American experimental hip-hop performer Moor Mother, French post-rock band Oiseaux-Tempête, Hungarian multidisciplinary artist and singer Réka Csiszér, Canadian electronic composer Tim Hecker, and Lebanese artists Mayss, Mazen Kerbaj, Sharif Sehnaoui and Raed Yassin. All these cultures come here to express themselves on the platform of Jerusalem in my Heart, and the result is edifying, a magnificent expression of deep anxiety… the meaning of Qalaq, a title inspired by the Lebanese situation.