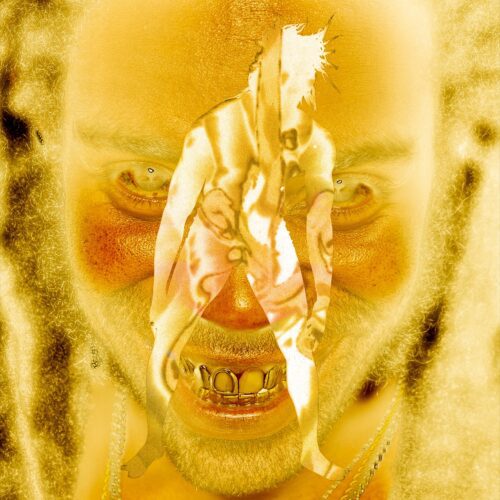 Ever since the pact signed between the Devil and guitarist Robert Johnson in the early 1930s, an ancient angry voodoo spirit seems to constantly resurrect itself to make more and more hearts speak, generation after generation. Ho99o9’s new album SKIN obviously can’t escape this curse from the ancestors. The duo, formed around theOGM and Eaddy, first began working in 2012 as part of the NJstreetKLAN art collective, a sort of response to the violence of another clan that sporadically came to haunt New Jersey in the 1920s, 40s, 60s, and 80s. In light of the unimaginable horrors perpetrated against African American communities throughout the 20th century, Ho99o9 invites us to take the liberty of questioning the rhetoric of the fat southern settlers and their cursed urban legend that the practice of the death penalty deters men from committing criminal acts… Now based in Los Angeles, the band’s Horror Death Kult really kicked off in 2015 with the sultry Dead Bodies in the Lake, a debut album that joins the haunted, perverse, and cruel world of Death Grips, clipping. and the horror films of musician Rob Zombie (House of 1000 Corpses). The group goes further in 2019 with the album Cyber Warfare, a real declaration of war against the “techno dogs” and against the increased surveillance (even self-surveillance) in which the virtual world plunges us. This declaration of world war web is then sealed in 2021 with the Russian punk collective Pussy Riot on their collaboration Mind Yo Bizness. Continuing the research on the same themes, this new album SKIN, produced by drummer Travis Barker (Blink-182), keeps the same efficient formula to create a hybrid beast that has the hardcore punk madness of Bad Brains or Black Flag, the industrial darkness of Nine Inch Nails and the feather of DMX or Bone Thugs-N-Harmony. Even 6ix9ine’s dirty-rap doesn’t sound so dirty and really pales in comparison to Ho99o9’s sharp lyrics: “Business first, pledge allegiance,” “Dreams are made of burning pain,” “She said my knife is too sharp, she said my clothes are too dark, she said I fuck like a dog,” “Welcome to the afterlife where everything is upside down.” The truth is not always good to tell, but this poignant new album succeeds in presenting it to us without detour and finally marks with iron the other side of the coin of the American dream of the Kolonial era: that of the sin Kommited by the United States Of Horror.