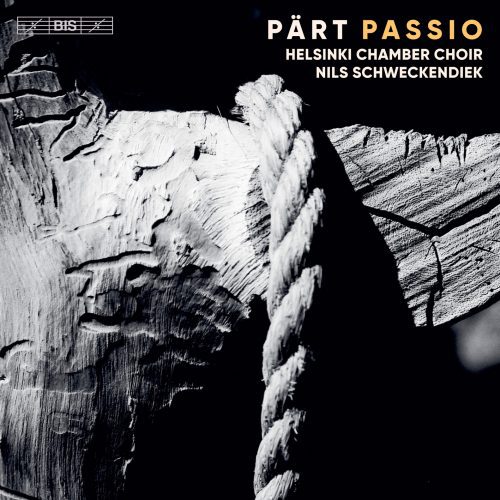 A black-and-white picture showing a T-shaped piece of wood, coarsely planed (a realistic choice, since the mechanical wood planer would not be invented for another nineteen centuries), on which hangs a hemp rope. It could be the torso and the arm–or the wing–of some headless angelic figure. Or it could be a cross, which would be fitting since our subject here is the passion of Christ. The image is stunning, and the text reads PÄRT PASSIO – Helsinki Chamber Choir – Nils Schweckendiek.

A long time ago it was customary to recount the Passion of Jesus in plainchant during Holy Week, following the story told by the four evangelists. Composers refined the tradition by creating different settings for the Passion, modifying its structure and incorporating choirs and instrumental parts. Now let us teleport ourselves to the early 1980s, in Vienna then Berlin, where Estonian composer Arvo Pärt settled. Pärt was probably more than fed up with the Soviet authorities; he had notably incurred their wrath a dozen years before when he wrote “I believe in Jesus Christ” in his “Credo”. It’s worth pointing out that to this day, notwithstanding his appearance comparable to a Lutheran minister from the second half of the 19th century, Pärt remains the most revered contemporary composer, among exegetes and music buffs of all tendencies.

Arvo Pärt had brought with him sketches of his own setting of the Passion of Christ , according to the gospel of John. The composition was completed in 1982. Pärt largely used the diaphonic technique he created and called “tintinnabuli”, where two notes become a single one (“One plus one, it is one–it is not two”, the composer would say). The opus was recorded for the first time in 1988 and published by the ECM label, to which Pärt was linked. The honour fell to the Hilliard Ensemble, led by Paul Hillier. It is, at least for the music lover expressing his view here, the driest of the four versions recorded so far. The following one, a bit meatier, was performed by the British ensemble Tonus Peregrinus led by Antony Pitts (Naxos, 2003). Candomino, a Finnish youth choir led by Tauno Satomaa, also did a version (Elatus, 2006).

Nils Schweckendiek, artistic director of the Helsinki Chamber Choir, was at the stand during this recording at St. Paul’s Church in Finland’s capital. Schweckendiek, trained at Clare College in Cambridge, has been the choir’s director since 2007. His reputation as an international promoter of contemporary music is beyond reproach. Hence, the result is more than convincing, Pärt’s opus is more meditative than ever. The violins, cello, oboe and bassoon harmonize in a quasi-supernatural way with the voices of the soloists and choir singers.

No need to specify that such music must not be the churchy people’s prerogative. Listening to this Passion according to Pärt might prompt a bout of mysticism in even the ungodliest music lovers. Holy moly, that’s good music, one might exclaim.