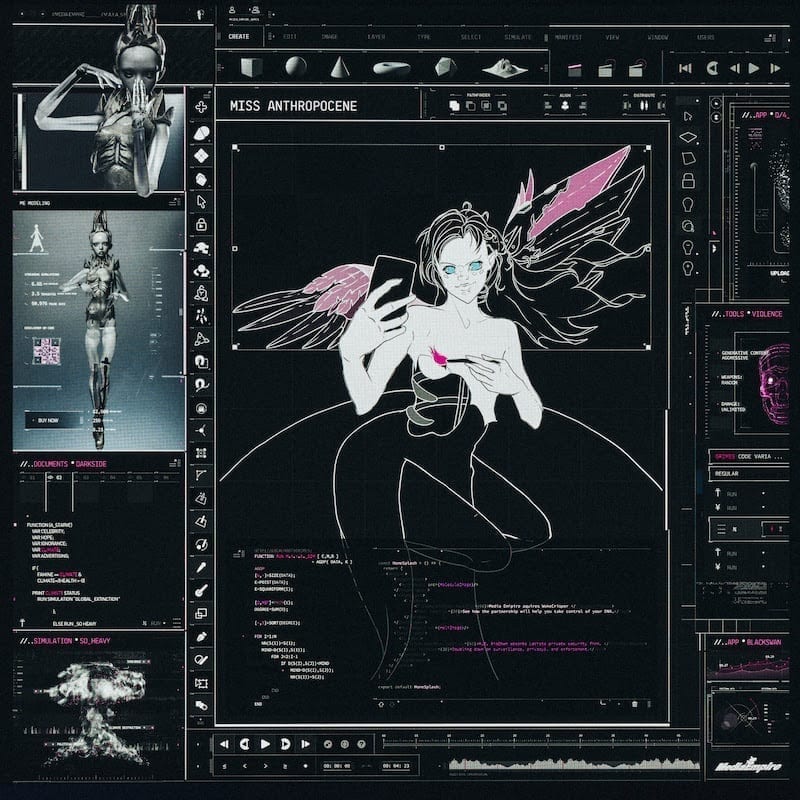 The highly anticipated fifth album from the British Columbian discovered by Montreal
label Arbutus in 2010, Miss Anthropocene continues the stratospheric epic of her
protagonist by forging a paranoid parable oscillating between musicality and cyberpunk
virtuality. Grimes plays the role of an anthropomorphic goddess of climate change in a
work of self-proclaimed apocalyptic nu-metal.

The musician delivers her darkest album while elaborating a pop universe which she
produces with panache. Bouyant and inconstant, her ethereal voice bears witness to a
fragility of its own, which she has assumed with singularity since her debut. The darker
side of the production sows a techno luminescence that blooms between her celestial
incantations. In this album Claire Boucher’s, the nu metal as announced is accompanied
by a conceptual irony that takes the form of a subversive poetry and an aesthetic
deviation of codes.

The lyrical intention is, however, on the whole indistinguishable. The omnipresence of
echo effects and Auto-Tune on her voice masks the ecological message, and the
political charge becomes somewhat incidental. Algorithmic demonology, artificial
intelligence and other symptomatic fetishes of our times rub shoulders, illusory and
unsettled. However, her lyrics are in the foreground on the dystopian ballad “Delete
Forever”, where she shares an almost mournful mood over the opioid crisis ravaging
America.

Her latest opus follows in every respect her approach to left-field pop. Apart from a few
dazzling fulgurances like So Heavy I Fell Through the Earth and My Name Is Dark,
we remain dubious about the young neo-baroque artist’s offering, because this sweet
opus, short on volatility, seems to serve more to consolidate the virality of her digital
avatar than to join the pantheon of her great achievements.