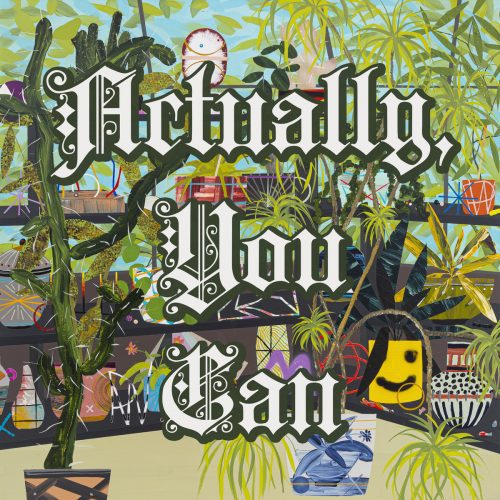 In the opening moments of Actually, You Can—Deerhoof’s eighteenth album—Satomi Matsuzaki’s honeyed voice whispers something about growing tomatoes when in fact it’s onions that have been planted. After this agricultural, a cappella introduction, John Dieterich and Ed Rodriguez’s thunderous guitars and drummer Greg Saulnier’s insanely furious rhythms break through. This magma of noise gradually transmutes into a melody, that of an aria by Georg Friedrich Haendel, while the singer hums a text that refers as much to the descent of Christ into Hell as to an essay by author and activist Maya Angelou. Whew! To think that this is only the first tune on the program! Other surprises await the listener who dares to embark on this postmodern rollercoaster, like the deconstructed version of “La Bamba” with fevered guitars on “Scarcity Is Manufactured”. The cement that unites the disparate stones of this edifice is the virtuoso drumming of the tireless Saulnier. Saulnier is the real master builder of the record since, due to the pandemic, he had to amalgamate the different musical parts on files sent to him by the other members of the band scattered all over the world. Qualifying his approach of “DIY baroque”, he conceived a teeming musical suite alternating cheerful, sonorous hodge-podge and calmer pieces from which very beautiful melodies emerge. Following in the footsteps of Beefheart and Zappa, Deerhoof have been delivering their mutant rock for over a quarter of a century. After 2020, during which they released no less than three albums, the band shows an impressive vitality on this new opus full of sap and energy.