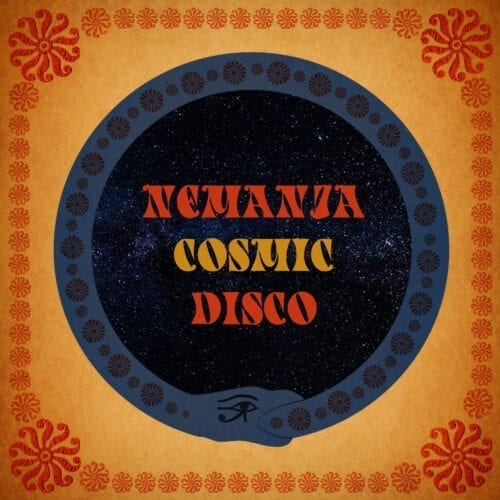 Hark! Cease your lamentations! You’ve likely never even heard of Nemanja, so your grief seems disingenuous, and in any case, Mr. Šipetić has been reborn. His miraculous resurrection attends the arrival of the second album from Nemanja, now a proper five-piece band, at least on stage (it’s still largely Šipetić’s singular vision, in recorded form).

Tarot Funk followed a firm formula, a tailor-made track each for nine of the major arcana of the tarot deck. Cosmic Disco claims to do likewise, offering to guide the listener through the Chikhai, Chonyid, and Sidpa bardos of Tibetan Book of the Dead. The conceit is far less convincing this time around, but hey, if it’s enlightenment you seek, try a lamp store.

“Dāw Yĕn” starts things off in the terrain of Swiss label Bongo Joe, a dizzy mix of ersatz Thai molam, drunken disco chants, low-gravity bass, and esoteric instructions. As matters progress, Nemanja adds other flavours familiar to fans of the revisionist mystery-funk movement, some Turkish folk-rock here (“Kozmik Oyun”), some classic cumbia there (“Cumbia Cosmica”), and lots of disco, obviously. “As Above, So Below” lays an organ arabesque over a rocksteady groove, and soaks it all in a wash of dub. To Šipetić’s credit, the nine numbers here are all sufficiently resolved, wonderfully weird but welcoming, and carry the ebullience of someone who got a second lease on life.