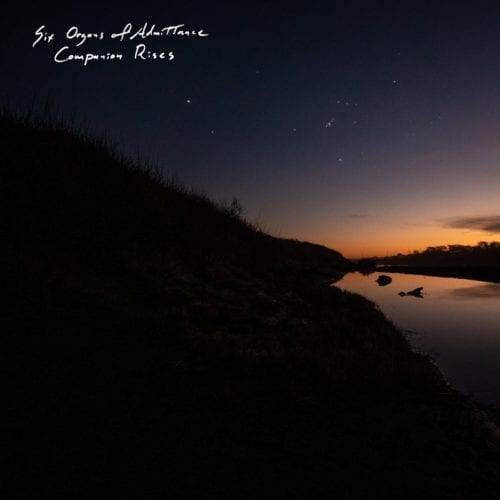 Ben Chasny has single-handedly carried the Six Organs of Admittance banner for just over two decades. This worthy descendant of John Fahey and Robbie Basho has taken his guitar – which he plays with virtuosity – to many different terrains: bucolic folk, hypnotic drone, psychedelic rock, visiting the plains of America as much as the ragas of the East.

The electronic sounds that open Companion Rises seem to announce that Chasny will be exploring further new territories. That’s the case, but this little synthetic touch is only one of the components of the overall sound of the album. The musician, rather, has picked out elements here and there from his whole career: instantly recognizable picking on acoustic guitar, acid solos on electric guitar, orientalized rhythmics on “Black Tea”… and the sprinkling throughout of a few electronic interventions. There’s a lot going on on this record!

A bit too much, to be honest. After several listens, we’re still searching for something solid to cling to behind this shimmering mist. The vocals are much too far in the mix and the melodies are tenuous. By the way, some tracks seem to stand out from the crowd (the most spare: the title track, “Black Tea”, “Haunted” and “Known”), but once the album is finished, it leaves few memories behind.