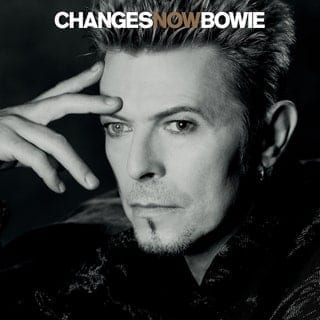 The nine songs featured on ChangesNowBowie have been circulating for quite some time in pirate versions. They were first recorded during a rehearsal in 1996 for the concert at Madison Square Garden, celebrating Bowie’s 50th birthday, and were later broadcast on a BBC special in 1997. For this exclusive broadcast, Bowie took the recordings from that rehearsal, taking great care – as always – to avoid the path of least resistance, and focusing in particular on his extensive 1970s repertoire. Surrounded by guitarist Reeves Gabrel, bassist/singer Gail Ann Dorsey and keyboardist Mark Plati (also in charge of the programmed rhythms), Bowie’s voice is well balanced and his versions are pure, calmer and impeccably executed; a nice way to rediscover, among others, “The Man Who Sold the World” (a version strangely reminiscent of Nirvana Unplugged), “Aladdin Sane”, “Repetition”, “Andy Warhol”, “Shopping For Girls” (an unexpected song from his parenthetical Tin Machine project) and a superb and very electric cover of the Velvet Underground’s “White Light/White Heat”, which Bowie often played live at one point. The other songs may not be as catchy but the whole is very well done. If there’s nothing really new on this posthumous album, it doesn’t insult the fan either by dredging up mediocre material from some drawer-bottom, as has happened before and will again. ChangesNowBowie, only available in digital version for the moment (the vinyl and CD will be released on June 20, for Record Store Day), is quite pleasant to listen to, showing the versatile singer and his music in a different light, proving once again that the strength of a song doesn’t lie in its basic instrumentation.