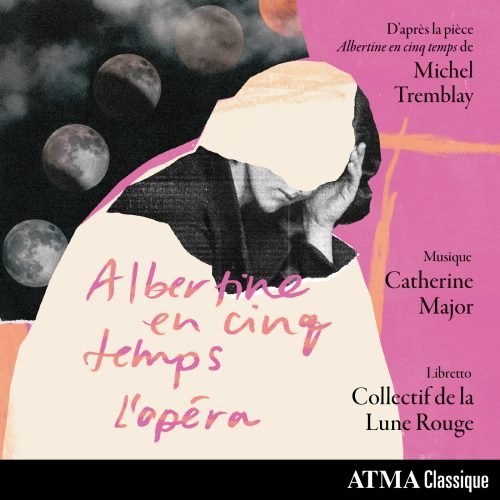 Two Quebec operas of accessible style, one after the other, are offered by Atma Classique. Last week, I spoke to you about Nelligan (read my text HERE), André Gagnon’s now well-known opera on a text by Michel Tremblay. This time, it’s Catherine Major who is interested in a text by Tremblay, one that has already been performed on stage many times, and I mean Albertine en cinq temps. That said, everything else in this production is entirely new: the musical setting by Catherine Major, the adaptation of the original text by the Collectif de la Lune Rouge, composed of Nathalie Deschamps, Chloé Ekker, Chantal Lambert, Monique Pagé and Catherine St-Arnaud. An essentially female project, therefore, for this fine reflection on the female condition through five sections of the life of the main character of the work, Albertine. Through her, the evolution of women’s place in Quebec society is expressed in a joual (Quebec French slang) that is precise, incisive without being aggressive, but above all directly connected to the expression necessary for the character’s development.

Catherine Major’s music, resolutely tonal, is neo-romantic rather than neo-classical (in the current meaning of the term). This makes the various incarnations of Albertine more easily approachable for the general public, unaccustomed to contemporary squeaks, with all due respect for the purists of today’s so-called serious music. It must be understood that at the beginning of the 21st century, all harmonic expressions can claim the label ‘learned’. The time of the Boulezian diktat is well and truly over, and so much the better. Does this mean that a ‘popular’ subject must necessarily be treated in this way, to the detriment of a certain harmonic modernity? Of course not! But I note that Quebec arrived relatively late in the opera world compared to its European cousins. The latter has had time to create lyrical foundations well rooted in the national literary and cultural soil, and in an “accessible” way in terms of melodies and harmony. Quebec has not. So why not take the time, here too, to build up this kind of repertoire that everyone can hum or welcome with an ease that is too often frowned upon? The beauty of our lyrical culture under construction is that we can do it with an autonomy and independence that will favour diversity. Alongside Albertine and Nelligan, there will also be such gems as Les Feluettes, Julien Bilodeau’s La Beauté du Monde and Gilles Tremblay’s exceptional fantasy-opera, L’eau qui danse, la pomme qui chante et l’oiseau qui dit la vérité, a masterpiece of luminous atonality if ever there was one.

Albertine and her five ”seasons” are beautifully portrayed by a quintet of voices made up of Catherine Saint-Arnaud (Albertine at 30 years old), Florence Bourget (Albertine at 40), Chantal Dionne (Albertine at 50), Monique Pagé (Albertine at 60) and Chantal Lambert (Albertine at 70). I give special mentions to Florence and Chantal for more than solid performances that give the character all her cynicism and disillusioned mockery. Tremblay’s language is admirably rendered (clear and sharp diction) by these two performers during memorable passages (Tant qu’à ça, track 3, a personal favorite).

Catherine Major’s music will not deceive fans of the artist’s early days. Here, it is simply more elaborate and fleshed out thanks to a chamber ensemble balanced between piano, strings (violin, cello and double bass) and a wind instrument (the oboe). This choice establishes a framework in which the forces complement each other very well between low and high notes, between dark velvet and frank colors.

The recording was made last September at Domaine Forget, shortly after the premiere at the Théâtre du Rideau Vert in Montreal. Albertine will be touring Quebec in the coming weeks. It will therefore be possible to go and meet her in your neighborhood. Don’t miss it for anything!

Another home run for Quebec music and Atma Classique. Bravo and thank you.