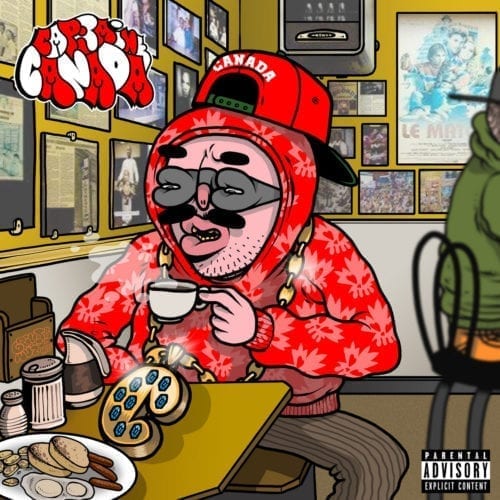 The situation is dire. The reign of the President of the Republic of Lower Canada, Robert Nelson, is threatened by a mysterious figure named Capitaine Canada. A lame history lesson? No way, eh! A new immersion in the crazy post-rigodon universe of Alaclair Ensemble. This time, the versatile Maybe Watson, who confirmed his know-how on his solo album Enter the Dance, an ode to old-school rap from the ’90s released in 2019, teams up with beatmaking virtuoso Vlooper. The latter, who also changed his identity for this opus, achieves a tour de force by drawing directly from the Californian court of Madlib and his contemporaries. Combined with the protagonist’s constantly altered voice, these ingenious productions bring a fresh breeze of energy expected into the keb rap scene. The light tone and hilarious lines of Capitaine Canada elicit many smiles during the half-hour listening session. The guys from Alaclair confirm with each project, solo or collective, that they are unbeatable in their field of expertise: not taking themselves seriously in a professional way. On “Capitaine(s)”, Capitaine Canada features “the most irreverent MC in Quebec City”, a guy named Clakmerde, his flow and style suspiciously reminiscent of Eman, a veteran of keb rap and an Alaclair colleague. There’s even a historical first in the picturesque “Poussin Chat”, where Capitaine Canada invites none other than his alter-ego Maybe Watson to collaborate. This concept album is teeming with references and winks, without weighing down the final product. If Robert Nelson’s position may seem shaky in the Lower Canadian microcosm, that of Alaclair Ensemble is stronger than ever.