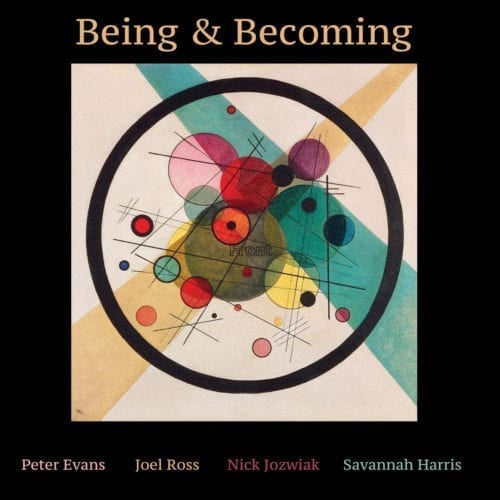 This album is stunning! I would even say bewildering and disconcerting, as much by the virtuosity of the playing as by the originality of the compositions, and the incredible character of the territories explored.

Since he arrived on the scene some 15 years ago, Peter Evans has demonstrated unparalleled versatility. Classical chamber music, modal jazz (including participation in a rigorously faithful redo of the legendary Kind of Blue), free jazz, and free improvisation, with some of the biggest names in the genre – Evan Parker, Barry Guy, Agusti Fernandez, to name but a few – contemporary jazz spiced up with electronics, extended techniques… he’s done it all. He has thus developed an unequalled mastery of his instruments, the trumpet and the so-called “pocket” trumpet (the trompinette dear to Boris Vian), which he plays with an inventiveness and a precision of execution that often leaves one breathless with admiration, even confounded.

If in the past some of his productions could prove to be difficult to access, this is not the case with this Being & Becoming, all the more so as he has surrounded himself with musicians who are no slouches, quite capable of swinging ferociously, starting with the vibraphonist Joel Ross, who played in Makaya McCraven’s band. The polyrhythmist Savannah Harris on drums and percussion, and the anchor on double bass, Nick Jowziak – who plays two superb, well-defined solos with a bow – are not to be outdone, and play their propulsive roles with brio, all the more so as the shifts in rhythm sometimes force them to turn on a dime. (In concert, this quartet must be dynamite).

But the one who steals the show here is Evans. Although he never tries to show it off, his technique, the purity and accuracy of his intonation and his agile playing, are dazzling, and his innovative compositions, which break with all the commonplace and conventional jazz formulas, and amalgamate all sorts of elements from the above-mentioned genres – and others – while remaining tonal, allow him to reveal the full measure of his immense talent.

His music is demanding, yes, but highly stimulating, intelligent without being cerebral. However, like everything else that is truly new, it needs to be tamed.

Evans is as uncompromising when it comes to its delivery as he is when it comes to its performance. For his personal projects, he has his own label, More Is More Records, whose signature is “futuristic music since 2011”. Only the first track is available for immediate listen on Bandcamp, and there is no trace of the album on streaming platforms. To listen to Being & Becoming, you have to shell out. But as long as you’re interested in the future of jazz and music in general, it’s worth it.