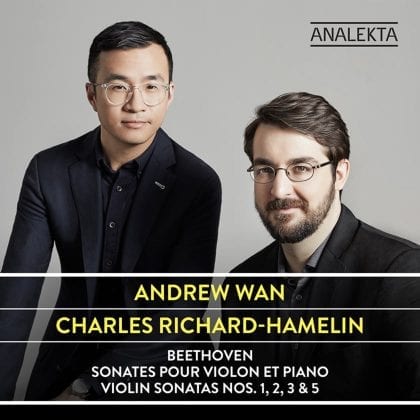 Analekta launches the second part of the complete sonatas for violin and piano by Beethoven, performed by two leading Montreal performers, among the Canadian and even world elite: Andrew Wan, concertmaster of l’Orchestre symphonique de Montréal, and Charles Richard-Hamelin, winner of the silver medal and the Krystian Zimerman Prize at the Frederic-Chopin International Piano Competition in Warsaw in 2015. This new installment of the complete works includes the three sonatas of Op. 12 as well as the Sonata No. 5 in F major, Op. 24, known as “Spring”. Two years after their brilliant performance of Sonatas 6, 7, and 8, the duo continues a collaboration that has become major. Until now, Wan has favoured a solo violin career under the direction of Kent Nagano – who knows if he’ll stick with it for the rest of his career? One thing is certain, he’s one of the few Canadian violinists to have acquired such experience and maturity, hence his predisposition for an international career. His playing here is very sober, very elegant, impeccably respectful of the works on the program, performed with undoubtedly the best Quebec pianist of his generation. With few exceptions, musicologists and chroniclers don’t hold these chamber-music works among the most important of the German composer’s (Nos. 1, 2, and 3 were written between 1796 and 1803, and No. 5, the best known on the program, was written in 1812). They rightly prefer his piano sonatas and string quartets, which in no way detracts from the absolute qualities of this suave music, played in tandem by high-flying performers capable of giving them an enviable balance between rigour and sensuality. Time will tell whether the pair will be able to establish themselves among the leading historical recordings of these sonatas for piano and violin (Kremer and Argerich, Zukerman and Barenboim, Szigeti and Arrau, etc.), but the qualities of these performances don’t lie, for anyone who appreciates the genial Beethoven far beyond his “hits”.