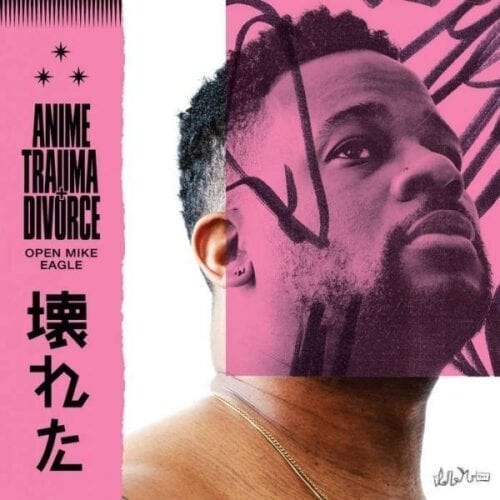 Few rap albums are so introspective. On Anime, Trauma and Divorce, Los Angeles MC Open Mike Eagle lays himself bare and indulges in a kind of powerful personal therapy, rich in emotion. Where some artists of the genre hide their vulnerability, he speaks openly about the trauma of his divorce and all that came out of it. The atmosphere and melodies of the album reflect this wonderfully. It’s pretty evident that Open Mike Eagle has a lot on his mind.

Through these 12 songs, lasting exactly 34 minutes, the artist goes into detail about the troubles he faced following his divorce. Financial problems, anxiety, self-doubt, and personal care are all discussed. A touching and sincere introspection, just like his portrait on the cover. The instruments are soft and discreet, which adds extra impact to his lyrics. Despite the weight of his suffering, Mike doesn’t abandon his sense of humour, as on “WTF Is Self Care”, where he says, “Trying to find that shit like a tourist, see if they take my insurance, WTF is self-care… it’s eating health food, and making juice out of kelp cubes…” Never has soul-searching been so pleasant to listen to as when told by Open Mike Eagle himself. The hilarious freestyle with Lil A$e (his son) that wraps things up is a stroke of genius, and shows just how much he’s taking his life back into his own hands.