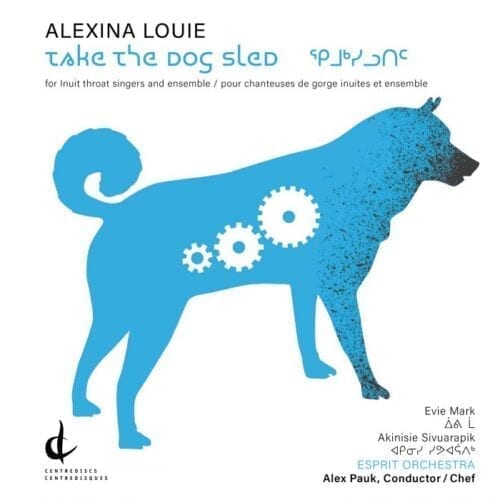 The music proposed by Canadian composer Alexina Louie was commissioned by the Montreal Symphony Orchestra in 2008, when it was preparing to visit Nunavik, and Kent Nagano wanted to add a new work to the program it was planning to present (the film Tusarnituuq! Nagano in the Land of the Inuit, by Félix Lajeunesse, reports on this tour). The other piece in this concert program, Stravinsky’s L’Histoire du soldat (… performed in Inuktitut!) set the basic instrumentation (bassoon, clarinet, double bass, cornet, percussion, trombone, violin). Instead of a narrator, the vocal part was assigned to two throat singers, Evie Mark, who participated in the creation of the piece in 2008, and, for this recording, Akinisie Sivuarapik. These are not OSM musicians, but rather members of the Esprit Orchestra, the Toronto ensemble that Louie founded in 1983.

At times, both because of the instrumentation and because of certain stylistic borrowings, Stravinsky’s shadow hovers over the rough landscapes the music evokes, which is amusing because Christos Hatzis also frequently quotes the Russian composer in his ballet Going Home Star. The repetitive nature of throat singing inspired the composer to create a very rhythmic accompaniment and melodies with a minimalist feel. Louie, who is accustomed to using large percussion sections, had only one instrumentalist here, modestly equipped (as travel by small plane obliges!), but she did very well.

At only about 20 minutes, the work is short, but it adds, as we saw above, to a growing body of work, and that’s without counting the authentic creations of Tanya Tagaq, whose work really helped open ears (see Anuraaqtuq, for example, from 2011, Disques Victo).