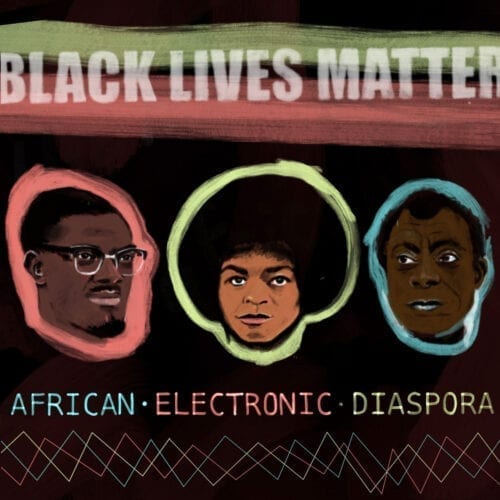 Attempting to catalogue the full spectrum of the Black planet’s excursions in electronic music would be a fool’s errand. A copious, if hardly comprehensive, selection of sounds of the moment is a more manageable undertaking. It’s one Belgian label Rebel Up! has handled admirably across this wisely curated and programmed spread of almost 30 tracks, a fundraiser motivated by the growing global demand that the worth of Black lives be recognized.

There’s defiance and anger, certainly, but so much more as well. There’s the caustic and the unsettling – Scúru Fitchádu’s snarling, combative version of Cap Verdian funaná; The enigmatic “MAMA” by [MONRHEA] and “A State of Uncertainty” by Kirdec – but also the reflective, the pacific, the upbeat, even the wildly positive (Onipa’s hectically happy “Nipa Bi”). There are some interesting iterations of Angolan kuduro present, from Lua Preta, Octa Push, and Diron Animal. A snatch of hyperactive singeli from Tanzania’s Duke, as well. There’s Dandana’s slick Mandingo funk with silky synth parts, and Disco Vumbi’s fusion of Kenyan benga and intractable Berlin techno (DV, alias Alai K., has a new album out this weekend too). All the aforementioned don’t cover even half the goods here, some of it exceptional, very little of which can be easily ignored.

In keeping with the principle of abundant possibilities, proceeds from your purchase of the digital album are directed to any one of almost 20 advocacy groups active in countering racism and fortifying Black communities, among them Colombia’s Renacientes, Brazil’s Criola, Portugal’s SOS Racismo, and the U.K.’s Black Minds Matter. Review the list and choose the one that suits you best.