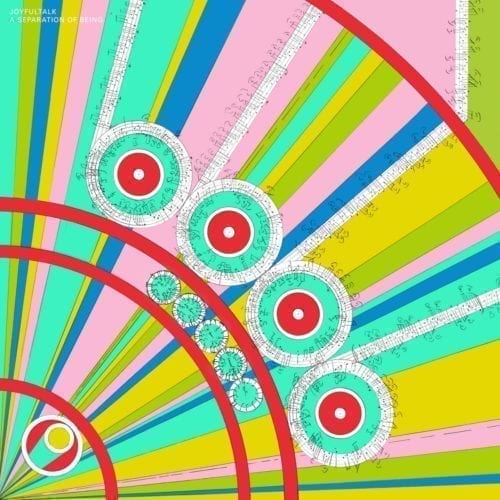 The mastermind of the JOYFULTALK project, Jay Crocker, is definitely a do-it-yourselfer. He does plumbing, repairs cars, builds musical instruments, maintains his home in a village in southern Nova Scotia, and designs contemporary art installations. One of his most recent creations is the huge colourful mural on the cover of JOYFULTALK’s third album, A Separation of Being. This pictorial work measuring five feet by ten is actually the score of the music on the record.

Far from being coldly conceptual, the resulting three-part musical suite is as limpid as it is luminous. From the very first moments of the album, a motif played on what seems to be a marimba (unless it’s an instrument invented by Crocker) underlines the minimalist bias of the work. The influence of Steve Reich and Japanese ambient of the ’80s – Midori Takada and Hiroshi Yoshimura came to mind – is palpable. Crocker’s analogue synths then bring the composition into electro territory.

It’s when the strings come into play that things really take off. Played by the violinist Jesse Zubot, they act like an electric current flowing through the conduits of the circular maze created by the keyboards. It feels like they’re constantly spinning around, but the path they take is never quite the same. We advise those allergic to repetitive music to refrain. Others will have a lot of fun in these cleverly designed mazes.