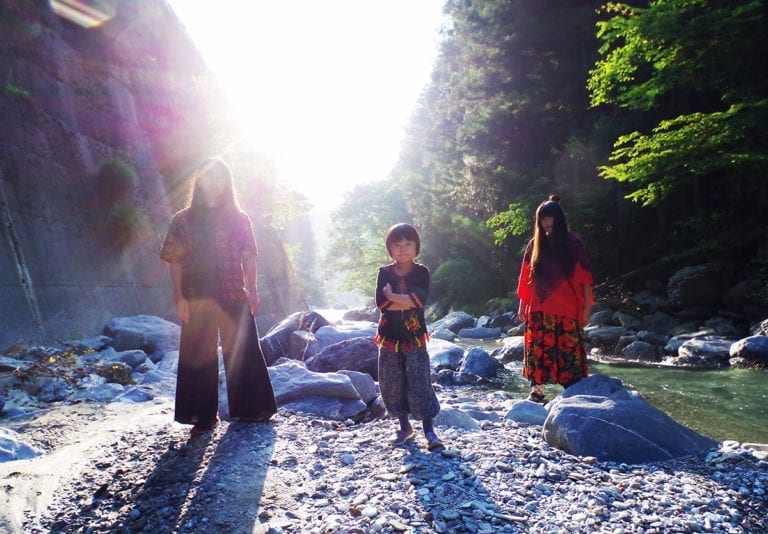 In Mongolian, the word means a wide-open sky. In Hungarian, a vast sea. Either is appropriate to the expansive, entrancing music of TENGGER, which is the Korean-Japanese couple itta and Marqido and their son RAII, based in Seoul but perpetually peripatetic. The “psychedelic new-age drone magic” they perform, by way of harmonium, voice, analog synths, and other odds and ends, expresses a pacific perspective that’s at once rooted in the earth of the planet beneath our feet, and loose on the winds of wanderlust. PAN M 360 connected with TENGGER to talk about their new album Nomad, on the Beyond Beyond is Beyond label.

PAN M 360: The way I understand it, the philosophy and practice of TENGGER is to visit new and unfamiliar places, not to document them, but rather to access your creativity through the heightened awareness and extended experience of time caused by immersion in a new environment. Is this correct, and if so, how does it inform your new album Nomad?

itta: TENGGER’s mission, or role, is to convey the various moments and places that have been consciously and unconsciously accumulated, through music. I think it makes me feel like I’m visiting “this space” because the moment it’s expressed, there’s a space shared by everyone who shares the moment. As for the new album, our identity means that in the presence of the two other countries of the 21st century, we would like to welcome the “we” who walk somewhere where there is nomadic freedom, where the life-bearing people of nature, can meet – perhaps not anywhere.

PAN M 360: TENGGER is frequently referred to as a duo, that of itta and Marqido. You are a trio, however, with your son RAII present and actively involved in your art.

itta: His name means “a person who is loved by all things and who knows how to give love to all things in the world”. He turned eight years old in May this year. We think of ourselves, as TENGGER, as being with nature and the environment that we see every moment, not limited to a duo or a trio. RAAI’s birth is what made us a family named TENGGER, and the change in our music also began at that point. RAAI accompanies us during our field recording and live tours, wherever possible and whenever possible.

This child also has the perception that he is a member of TENGGER himself. Yesterday there was a full moon, and RAAI, who had suggested we make a wish while looking at the moon together in the evening, told me his wish. “I wish I could live as part of TENGGER with my mom and dad for a long time.”

His gestures and movements have a great influence on our music, especially when it’s performed live on the stage. We respond to the atmosphere and the space in the audience, but I think it’s becoming more organic after RAAI’s appearance.

PAN M 360: The music you create is meditative, inviting a more peaceful, reflective, and appreciative state of mind. The practice of meditation can be used to expel troubling and unhealthy feelings, but it can also serve to heighten one’s awareness – of both oneself and one’s surroundings. I feel there’s a sort of paradox there.

itta: I think meditation is important. You may get some enlightenment from meditation, and it begins by emptying your mind. Yes, as you said, it’s kind of a paradox. I think “emptying your consciousness” will help us when we are standing in front of an unknown forked road, to find the wind blowing from the narrow entrance to the next destination.

PAN M 360: You’ve explained elsewhere that you apply to your art the principle of shanshui. The term, which is generally applied to classical Chinese poetry and painting, but not music as far as I can tell, translates to “landscape”, or more precisely “mountain-water”. Can you explain this idea a bit more, as you perceive it?

itta: When it comes to shanshui, sansu in Korean, I think it’s important to show respect for nature, not to interpret the mountains, rivers, and seas that we see. It’s like feeling the majestic energy of yeongsan, which means sacred mountains, where temples or shrines are located, known to have a spiritual energy. We are making music to keep reminding ourselves that we are part of the natural. That attitude is the relationship between shanshui and TENGGER’s music.

PAN M 360: I appreciate remarks you’ve made to the effect that when we speak of our environment, the line between the natural – untouched by human beings – and the artificial – the spaces we create and alter to accommodate our lives – is not firm or absolute. You’ve also mentioned, in one interview, that you are “not trying to express paradise”.

itta: Nature is beautiful but dangerous, and it cannot be on its own. You can co-exist only when you rely on many other existing beings and are supported by them. If we face the fact that we are living with the help of all the beings around us today, it becomes pretty clear that the boundaries should be lifted. Yet we still have to experience boundaries in many ways. Boundaries between nations, racial discrimination, and the distinction between mankind and nature. I don’t think these things have ever existed, but they should be lifted from our consciousness as well.

PAN M 360: Your themes, ideas, and therapeutic music are of particular pertinence right now, in this time of collective isolation, distancing, and anxiety over our relationship with nature. What are your reflections on this? And of course, what art are you working on now?

itta: Boundaries only create anxiety, so we are trying to live today well and gratefully, and to continue to learn from nature. I think it’s the same as exploring humans. Compassion. I live preparing for what’s next with the mindset of identifying myself as the same as the object itself. Please look forward to the next work from TENGGER.

PAN M 360 thanks Jinsun Taylor Kim for translating this correspondence.