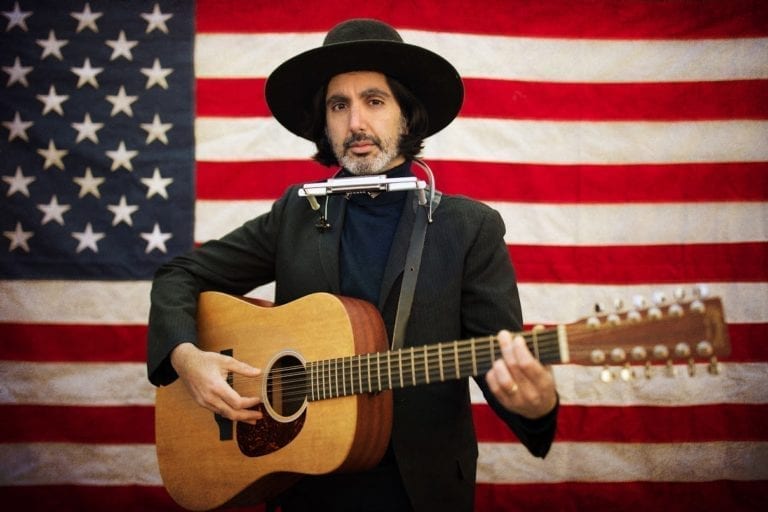 While Montreal’s Elephant Stone may be our local lords of the softer side of psych-rock, their lyrical aspect has bite. Following the Valentine’s Day release Hollow, an album rife with theoretical doom and despair, comes the new single, “American Dream”, a caustic assessment of the nightmare south of our border – very real, very right now. PAN M 360 spoke to Elephant Stone frontman Rishi Dhir about the song, and about Sacred Sound Sessions, his regular, semi-formal solo live-stream from his home studio – another session is scheduled for this Tuesday night.

PAN M 360: You’ve just released a new, stand-alone Elephant Stone single, “American Dream”. Musically, it’s a lovely bit of psychedelic folk rock. Lyrically, however, it might as well be an enraged hardcore punk track. It’s an angry song, which is uncharacteristic of you, and I imagine it wasn’t easy to work through.

Rishi Dhir: The key to most of my lyrics is empathy. I try to feel what the person in the song is feeling. “American Dream” is definitely my most lyrically direct song so far. However, I find a number of my songs to have a cynical or angry twist to them, albeit over breezy melodies – “Bombs Bomb Away”, “Manipulator”, “Masters of War” – the list goes. It did take bit to figure out how to say what I wanted to say. Once I got the opening verse, things just rolled out.

PAN M 360: Proceeds are going to the PLUS1 COVID-19 Relief Fund, earmarked for people in the now sorely beset live music industry. PLUS1 is the sort of meta-charity that evolved out of Arcade Fire’s Haitian relief efforts. Why did you choose them in particular to channel proceeds to?

RD: I’m good friends with [PLUS1 founder and CEO, and former Arcade Fire member] Marika Shaw, and always admired her passion and the work done by PLUS1. It seemed like a natural fit.

PAN M 360: You were a pretty early adopter of the live-streamed confinement-time performance with your Sacred Sounds Sessions, which are a little looser than straight-up concerts. They’ve evolved in the few weeks that you’ve been doing them, and you’re doing another this Tuesday night.

RD: With the cancellation of our SXSW show and U.S. tour, I felt compelled to try to connect with our fans and friends. The first week or so of the quarantine was pretty emotional for me, and I felt like I needed to do something. The first SS session had a much bigger impact on me than I anticipated. I realized that we’re all facing the same challenge together. It was beautiful.

PAN M 360: Any hints about what to expect during Tuesday night’s stream? Will you perform “American Dream”?

RD: I usually work things out the night before the sessions. I always open the session with about 15 minutes of sitar, and then go from there. Yes, I will most likely be playing “American Dream”. The reaction to the song has been strong.

PAN M 360: Tangential question – what’s up with Acid House Ragas? Will you do more of that? Will you play any during Sacred Sounds Sessions?

RD: I started Acid House Ragas kind of as a reaction to the years of recording and touring with Elephant Stone. I needed a break from the song-based arts, and wanted to explore something more groove, more acid house. Stephen Ramsay, my partner in the project, and I have discussed working on music remotely. We had a couple of jams before the whole COVID-19 outbreak that seemed very promising. I’ve been thinking about bringing out some electronic elements for a Sacred Sounds session – maybe next month!

PAN M 360: It’s actually kind of exciting, watching the overall media and arts communities, particularly the indies, adjusting and innovating to the current situation, and what may follow.

RD: Yes, artists are doing what artists do – creating. I’ve been very productive over the past few weeks. “American Dream” came together within two weeks, I’ve been doing a bunch of virtual festivals in addition to Sacred Sounds Sessions, writing and composing, practicing drums, making pizza…

The next Sacred Sounds Session happens tomorrow, Tuesday, May 5, at 9pm EST. You can tune in here. You’ll have to make your own pizza, however.